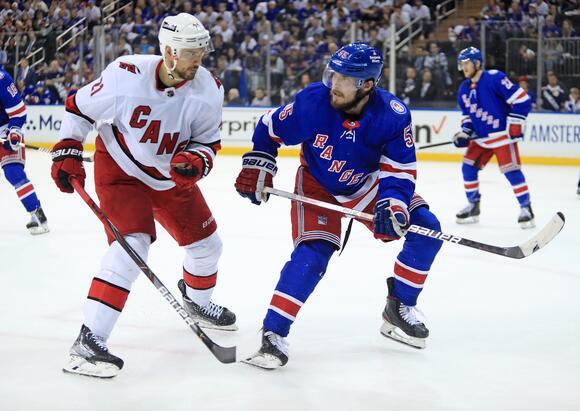 The Rangers’ win over Carolina in Game 3 of their series wasn’t without incident, as the Hurricanes took what Blueshirts head coach Gerard Gallant called “a cheap shot” as time expired.

As the buzzer sounded, Carolina defenseman Max Domi cross-checked Rangers defenseman Ryan Lindgren, which led to Lindgren slashing Domi and taking him to the ice as both benches rushed to the scene:

Not only did Gallant not like it, he intimated that the Rangers won’t be afraid to fight back.

"I wasn't happy with the bulls--t at the end of the game that they initiated," Gallant said after the game. "We didn't do that when the games were close. They put their guys out. That's fine. If they want to play like that, we've got the guys that can match them. Domi took a cheap shot at our defenseman, and you have long memory in this; you think about things, and the shoe might be on the other foot someday.”

Gallant was later seen yelling at former Rangers defenseman Tony DeAngelo, who was of course bought out by the Rangers last year due to behavioral issues, and was the target of boos and derogatory chants from the Garden faithful all game.

It appeared on the broadcast that Gallant was making a chirping gesture and told DeAngelo to “shut the f up,” which the former Ranger played off.

“Pumped about his win, I’m sure,” DeAngelo said.

Maybe, but also heated about the confrontation at the buzzer.

“I don’t like that at the end of the game, the game is over – and we still have four games to go with them,” Gallant said. “They’re not sending any message; we have guys to handle their guys if we want to, but we didn’t play it like that.”

Chris Kreider joked that he was “still hugging (Tyler) Motte and missed it,” and when asked about it from his side, Carolina coach Rod Brind’Amour claimed he missed Gallant yelling at DeAngelo and also didn't really see what happened so I can't comment on” the Lindgren/Domi dust-up.

Canes defenseman Jaccob Slavin also said he was the 'wrong guy to ask,' but added that he didn't think there was any extra bad blood on Sunday night, noting that 'it's the playoffs, and everyone is giving it their all.'

Jordan Whitehead thrilled to get interception, big Jets win in his hometown

Whitehead grew up outside Pittsburgh and played his college football at Pitt, so the first-year Jet was stoked to put on a winning performance in front of many friends and family members.
NFL・9 HOURS AGO
Democrat and Chronicle

81 different players, 195 transactions. Is it any wonder why the Red Wings struggled in 2022?

One of the hardest things in professional baseball is to win a division title or a league championship, especially at the Triple-A level. The never-ending roster churn, especially for teams whose parent club is either have a terrible spate of injuries or just a terrible season which warrants looking at as many young...
ROCHESTER, NY・21 MINUTES AGO