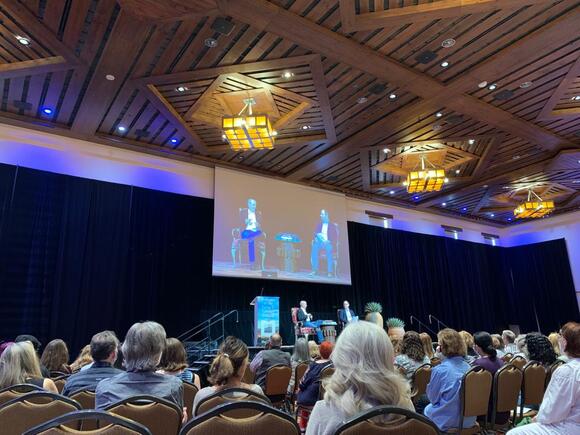 Bestselling crime author Don Winslow kicked off the first full day of the Santa Fe Literary Festival by confirming that he intends to retire from novel writing. Taking to the event’s main stage early on Saturday morning, he said that he will from now on be focusing on political activism, specifically fighting Donald Trump and the former President’s associates.

Although Winslow said he was not a “political person”, he has felt moved to become active as a campaigner since the events at the US Capitol on 6 January 2021, “We don’t get to choose our time,” Winslow told The Independent . “We just don’t, no more than someone living quite peacefully in Ukraine up until a few months ago gets to choose, not that I’m comparing myself to them.”

Winslow set the tone for a day which featured both expert storytellers and a strong running theme of urgent political activism. He was followed on the festival’s main stage by The Handmaid’s Tale author Margaret Atwood , who spoke about the leaked Supreme Court memo that suggested the US could imminently overturn Roe v Wade. She was unimpressed with justices who defend such judgments by self-identifying as Constitutional orginalists.“If you take the original Constitution [as it is and apply it], a lot of people are going to lose their rights, including all women,” she said, as well as “people who don’t own property”.

Later in the day, Emily St. John Mandel spoke about her 2014 book Station Eleven, which has been widely described as prophetic for its description of characters grappling with a world ravaged by a deadly flu pandemic. She said that she never thought of her most famous novel as a “pandemic book”. Instead, she explained, she wanted to write about a “post-technological society”, and “to have a post-technological society, you have to end the world.”

With the literary festival playing out against the backdrop of several large wildfires burning in New Mexico, including the largest in state history, author and conservationist William deBuys and Roshi Joan Halifax, social activist and Buddhist teacher, took part in an inspiring panel on the difficult topic of: “Where Do We Go From Here?”. DeBuys, a Pulitzer Prize finalist and author of ten books including The Trail To Kanjiroba , addressed the imbalance of how communities, like those he visited in the Upper Dolpo region of Nepal, were suffering frontline impacts of the climate crisis but had done little to create the emissions that have caused it. “I think one of the few reasonable responses is simply to allow that knowledge to help you continue to look for the structural violence in the world you inhabit, and to work to change it and to be self conscious in your positioning with that structural violence and try not to participate in it,” he said. “You can’t get out of it completely, it’s really how the world works. But it’s something that we can all strive to change."

The day was brought to a close by legal thriller author John Grisham, who entertained the audience with stories of lawyers gone bad while also keeping up the day’s political edge by discussing his work with The Innocence Project. Speaking of efforts to overturn the many miscarriages of justice that happen within the American legal system, Grisham pointed out: “It’s pretty easy to send an innocent person to prison, but it’s virtually impossible to get one out.”

The festival is set to continue on Sunday with appearances from Game of Thrones creator George RR Martin , Lost Children Archive author Valeria Luiselli and US Poet Laureate Joy Harjo.

The Independent, as the event’s international media partner, is providing coverage across each day of the festival with exclusive interviews with some of the headline authors. For more on the festival visit our Santa Fe Literary Festival section or visit the festival’s website .

Donald Trump Jr has been ridiculed after seemingly falling for a parody Twitter account that called for Aretha Franklin’s “Natural Woman” to be banned. The account, The Trans Cultural Mindfulness Alliance (TCMA), which states that it’s run from Oslo, Norway, posted that the 1967 song was “offensive to trans women” and should be removed from Apple and Spotify but later added that the posts were “satire”. “There is no such thing as a ‘natural’ woman,” the post argued, adding that it “perpetuates multiple harmful anti-trans stereotypes” and that it has “helped inspire acts of harm against transgender women”.Albeit satirical,...
9 HOURS AGO
The Independent

When people accused me recently of criticising Prince Harry and Meghan Markle for “profiteering” from my grandfather’s name, I was shocked. Because it was false. I had never accused Harry and Meghan of doing this.Instead, I was misquoted, leading to global news coverage that weaponised my name – and the name of my grandfather, the late anti-apartheid activist and first president of South Africa, Nelson Mandela – to target a woman of colour.It is true that I feel terribly disappointed whenever the Mandela name or face is used for commercial purposes without any benefit to vision he stood for.But...
14 HOURS AGO
The Independent

Mstyslav Chernov’s documentary “20 Days in Mariupol,” a first-person account of the early days of the Russian invasion of Ukraine, won the audience prize for world cinema documentary at the Sundance Film Festival. Juries for the various sections at the festival announced the winners at an awards ceremony Friday in Park City, Utah. “I want to thank everyone who believed in us: AP, Frontline and Sundance and all the audiences who did not turn away,” Chernov said. “This is not an achievement, this is a privilege.”“20 Days in Mariupol” was a joint project between The Associated Press and PBS “Frontline,”...
PARK CITY, UT・7 HOURS AGO