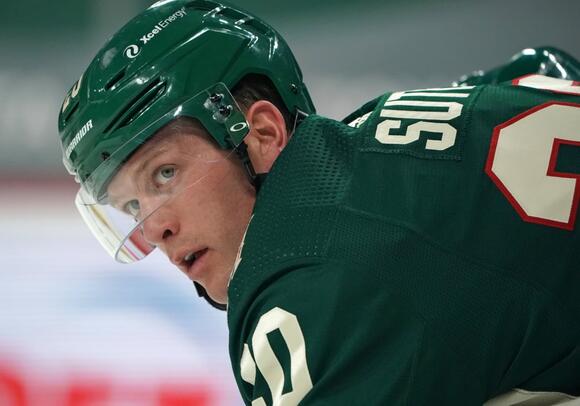 Some damning criticism from one of the most respected former NHL stars.

Ryan Suter's reputation in NHL locker rooms took another hit recently when his former teammate with the Nashville Predators ripped him, saying he would routinely complain as a rookie and later became a "huge distraction" in Minnesota.

Jason Arnott, the former captain of the Predators who played 18 years in the NHL, spent four years alongside Suter – from 2006 to 2010 – with the Predators. Arnott, in unfiltered fashion, spoke openly about Suter when he was asked about him and Shea Weber coming up together with the Predators in 2006.

"I knew both of them were going to be huge, great players. The attitude of [Suter] was night and day to [Weber],” Arnott said on the Cam and Strick Podcast . “All he would do was complain about how come he’s not on the power play, how come he doesn’t play enough, ‘I can’t believe this guy’s making this much money.'”

"I'm like, 'Dude, it's your first year in the league. You're going to make so much money if you keep going the way you're going and how good you are. Why are you worried about that right now? And it's your first year. Just go out and play stop complaining about everything.' So that was his mentality," Arnott added.

Arnott believes Suter's reputation followed him to Minnesota, when he and Zach Parise signed matching 13-year, $98 million contracts in 2012.

"He did make his money. But I heard he was a huge distraction in that dressing room. Knowing [Wild GM] Billy Guerin, he's not putting up with that and he's cleaning house. And now look at them, he's built a phenomenal team without all that money and distraction," said Arnott, later adding, "I heard they hated him there."

Speaking on KFAN radio in the Twin Cities Thursday, Guerin was asked by Dan Barreiro if Suter would still be with the Wild if Guerin was "evaluating only on performance and not locker room influence."

"No. We've just moved on from a lot of guys," said Guerin. "There had to be a change here and it's not just Suter and [Zach] Parise like everybody thinks. There needed to be major change in the organization for us to move forward, and it's not just those two guys."

Guerin added: "I don't think it's fair to put everything on those two because a lot's changed."

Last year, the Wild bought out the contracts of Suter and Parise, a decision that comes with massive dead money salary cap hits the next three seasons.

As for Guerin, Arnott also played with him in Dallas and recalled him being very intense and not afraid to get in his or any other player's face.

"Like nose to nose and be ready to throw down if I got mad. He didn't give a shit," Arnott recalled. "But yeah, as soon as he went [to Minnesota] I'm like yeah, 100% [Suter] and Parise are gone

With less than two weeks until opening night, the Wild appear to be set.
SAINT PAUL, MN・23 HOURS AGO
Bring Me The Sports

A lackluster attendance total in the final week has everyone feeling...disappointed.
MINNEAPOLIS, MN・2 DAYS AGO
Sports Illustrated

Several of college football’s top teams will have their patience and discipline tested this weekend by opponents they can’t afford to overlook.
COLLEGE SPORTS・16 MINUTES AGO
Bring Me The Sports

KAT said he's at the lowest weight of his playing career.
MINNEAPOLIS, MN・19 HOURS AGO
Bring Me The Sports

The Twins rested their second baseman as they opened their final series of the year in Chicago.
CHICAGO, IL・11 HOURS AGO
Bring Me The Sports

5 things that stood out in the Gophers' loss to Purdue

There were way too many unforced errors by the Gophers.
WEST LAFAYETTE, IN・2 DAYS AGO
Bring Me The Sports

Vikings' star right tackle has a key trait: The ability to recover after getting beat
MINNEAPOLIS, MN・2 DAYS AGO

Cine suffered a compound fracture, meaning the bone pierced the skin on his leg.
MINNEAPOLIS, MN・18 HOURS AGO
Bring Me The Sports

Vikings are living and dying by Justin Jefferson

A huge day from the star receiver led Minnesota to victory but it left some questions about the offense as a whole.
MINNEAPOLIS, MN・1 DAY AGO