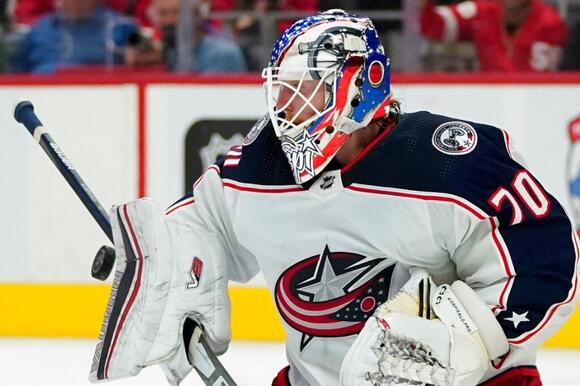 “ Joonas has been a consummate pro during his Blue Jackets career,” GM Jarmo Kekalainen said. “His 2021-22 season was derailed by injury , but we fully believe he will return to form, and are happy that he will continue to be a part of our team.”

Korpisalo, 28, signed a one-year contract extension for the 2022-23 NHL season. The player has accumulated the following stats in 182 regular-season games since he started with the Blue Jackets in 2015:

During nine Stanley Cup playoff games, Korpisalo also nabbed a 3-5 mark with a 1.90 GAA, .941 SV% and two shutouts. The team gave notice in March that he had to miss the rest of the 2021-22 season because of a hip injury that required surgery. He was on the second of a two-year contract where he was making $3.4 million.

Watch as the verdict is read in the player above. COLUMBUS, Ohio (WCMH) – A Franklin County jury has found a woman guilty of murdering her husband in the couple’s Dublin home. The verdict was reached Thursday in the trial of Holli M. Osborn, 46, of East Liberty, who was found guilty on two counts […]
DUBLIN, OH・17 HOURS AGO
NBC4 Columbus

COLUMBUS, Ohio (WCMH) — A man is hospitalized after being shot in a road rage incident in north Columbus Tuesday evening. Columbus police said the shooting happened near Cleveland Avenue and Belcher Road at approximately 7:36 p.m. The victim, who suffered a gunshot wound to the leg, drove himself to the hospital, where he was […]
COLUMBUS, OH・2 DAYS AGO
NBC4 Columbus

ABOVE: A previous report on Marissa Jones and her family. COLUMBUS, Ohio (WCMH) — Columbus police announced Tuesday the arrests of all five suspects in a gas station shooting in September that left a 33-year-old woman severely injured. Columbus police said those arrested are: Jawara K. Scott, 20 A 17-year-old boy A 15-year-old boy A […]
COLUMBUS, OH・2 DAYS AGO
NBC4 Columbus

COLUMBUS, Ohio (WCMH) — A Columbus woman who admitted to shooting a man, robbing another, and shooting at two police officers in November 2020 was sentenced to up to 33 years in prison Monday for assault and robbery. Suney Coleman, 25, was sentenced after pleading guilty in August to four felony charges including assault, robbery, […]
COLUMBUS, OH・2 DAYS AGO

MYRTLE BEACH, S.C. (WBTW) — An Ohio man died Friday after he fell from a 15th floor balcony at a Myrtle Beach hotel, according to the Horry County Coroner’s Office. The incident happened at about 3:30 p.m. Friday at the Patricia Grand Hotel along North Ocean Boulevard, according to the coroner’s office. Markell Hope, 34, […]
MYRTLE BEACH, SC・1 DAY AGO
NBC4 Columbus

Man shot in face while driving in northeast Columbus

COLUMBUS, Ohio (WCMH) — A man is in critical condition Tuesday after being shot in the face in Columbus’ northeast side. Police dispatchers said they received a call at 5:35 p.m. that an unidentified suspect shot a 19-year-old man who was in his car near Morse Road and Karl Road. The suspect was in a […]
COLUMBUS, OH・2 DAYS AGO
NBC4 Columbus

Woman dies months after being shot into Columbus garage

COLUMBUS, Ohio (WCMH) – A woman has died six months after being shot in the Hilltop neighborhood, according to the Columbus Division of Police. Officers found Elizabeth Brice, 27, lying in a garage with two gunshot wounds on March 26. A suspect shot her at the back of a home near the 100 block of […]
COLUMBUS, OH・2 DAYS AGO

COLUMBUS, Ohio (WCMH) — The second of two men facing murder charges for the fatal assault of a man outside a Short North bar is in custody. Chrystian Foster, 32, was arrested Tuesday morning, according to court records. Foster, who turned himself in, is being held in Franklin County Correction Center I. Foster and 28-year-old […]
COLUMBUS, OH・2 DAYS AGO
NBC4 Columbus

CHILLICOTHE, Ohio (WCMH) — A Columbus man accused of injuring a sheriff’s deputy is wanted by the Ross County Sheriff’s Office. Davon L. Rayford, 26, ran away from Ross County Common Pleas Court and injured a deputy, according to a news release from the sheriff’s office Tuesday. A warrant was filed for Rayford’s arrest. Prosecutors […]
ROSS COUNTY, OH・2 DAYS AGO
NBC4 Columbus

One dead after tractor-trailer crash in Fayette County

UNION TOWNSHIP, Ohio (WCMH) — One man is dead after a crash near Union Township, Fayette County, Wednesday afternoon. According to the Wilmington post of the Ohio State Highway Patrol, the crash happened at approximately 4:36 p.m. along US 62 just north of SR 753. Christopher Stinespring, 48, of Madison, was driving a 2013 GMC […]
FAYETTE COUNTY, OH・1 DAY AGO

Whether your ride to work this morning was a smooth one could depend on which state you call home.
OHIO STATE・2 DAYS AGO
NBC4 Columbus

COLUMBUS, Ohio (WCMH) — Columbus police said a woman was shot in the knee after an altercation over a man’s property on the east side of the city Wednesday afternoon. Witnesses at the scene told police that the suspect, Faith Fiore, 22, went to a home on the 1500 block of Loretta Avenue at approximately […]
COLUMBUS, OH・1 DAY AGO
NBC4 Columbus

COLUMBUS, Ohio (WCMH) — Columbus police have arrested a man in connection with a South Linden shooting they referred to as an act of revenge. Devon Robinson turned himself in to authorities Tuesday and admitted to shooting 38-year-old Mario Copeland on Sept. 23, the Columbus Division of Police’s Homicide Unit said. Copeland died a short […]
COLUMBUS, OH・1 DAY AGO

COLUMBUS, Ohio (WCMH) — A Dublin woman facing two counts of murder for allegedly killing her husband by shooting him three times while he was sleeping back in 2018 was in court Tuesday. Detective Jason Murphy of the Dublin police department testified Tuesday during the trial of Holli Osborn. Murphy was questioned by both the […]
DUBLIN, OH・2 DAYS AGO
NBC4 Columbus

Late-game collapse means Crew must win or tie on Sunday

CHARLOTTE, N.C. (WCMH) – The Columbus Crew’s playoff chances remain fair, despite another late-game collapse, this time against Charlotte FC. The Crew were unable to win two consecutive games for the first time this season but secured a point after escaping Charlotte with a 2-2 tie, eliminating Charlotte from playoff contention. The tie forces the […]
COLUMBUS, OH・1 DAY AGO
NBC4 Columbus

ATHENS, Ohio (WCMH) – A convicted arsonist is looking at multiple years in prison after he set a house on fire in Glouster. Raymond Brooks, 42, was sentenced to 8-12 years in prison in Athens County Common Pleas Court on Tuesday. He pleaded guilty to aggravated arson for setting his ex-girlfriend’s house on fire in […]
GLOUSTER, OH・1 DAY AGO
NBC4 Columbus