We're the home page of Muncie Indiana news and sports with in depth and updated Muncie local news.

As a recruit, Ben Botts turned down Michael Lewis. As a coach, Botts couldn't refuse 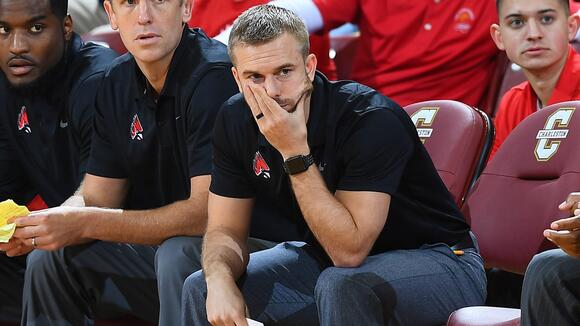 MUNCIE, Ind. — In a matter of two weeks, Ben Botts' life was turned around.

He and his wife, Jordan, welcomed their second child, Ryan Rose, on March 27. Two weeks earlier, former Ball State men's basketball coach James Whitford was fired and Botts' future was in the air.

That's college coaching for you. One week you're living your dream. The next, you could be looking for a job.

Luckily for Botts, he didn't have to go anywhere to find his next role. He was the lone assistant coach on Whitford's staff retained by head coach Michael Lewis, along with Bill Comar, who was named the special assistant to the head coach. Botts was named an assistant during Lewis' introductory press conference on April 6.

►How Jamal Meeks returned to college basketball, came to Ball State as an assistant

"It’s home, I love it here in Muncie," said Botts, who played in back-to-back state finals at Muncie Central, where he graduated in 2007. "Both my kids were born in the same hospital that I was born in, I think that’s pretty cool.

"It’s personal for me, just like it is for Michael to be back in Indiana, it’s personal for me in Muncie. I’d love nothing more than to hang a banner here at Ball State because I grew up as a season ticket holder, heard stories of people hanging on the light posts outside when Ball State advanced to the Sweet 16 back in 1990, so I would like nothing more than to experience that here and for our guys to experience that.”

With this new staff, Botts believes Ball State can do just that. In addition to Botts, Lewis selected Lou Gudino as the associate head coach and Jamal Meeks as the other assistant.

Like Gudino and Meeks, Botts' relationship started years ago. When Lewis was at Eastern Illinois (2005-11), he actually tried to recruit Botts. During his introductory press conference, Lewis joked about how he's "not as good of a recruiter as everybody thinks" since Botts turned him down.

Lewis complimented Botts' ability to develop relationships with players. When Mid-American Conference Freshman of the Year Payton Sparks entered the transfer portal in mid-March, Botts was one of two coaches he personally thanked. Lewis' only criticism of Botts was his restaurant recommendations.

STAY INFORMED AND SUPPORT LOCAL JOURNALISM: Subscribe today using the link at the top of this page.

"I think he’s an outstanding individual, comes from a great family, obviously (has) got deep roots here and has been a part of this university the last few years," Lewis said. "I think he played a major role in some of the younger guys in this program and them being here. I think when you combine all those things, it’s just a very natural fit to keep him here.”

Botts remembers the impact Lewis made on him as a 17-year-old. Botts commented on Lewis' energy, passion and ability to get you excited about chasing your dreams. In his first two months, he's has brought that same energy and passion to Ball State. When Lewis asked Botts to be a part of it, he didn't hesitate.

STAY INFORMED AND SUPPORT LOCAL JOURNALISM: Subscribe today using the link at the top of this page.

"It was a no-brainer, there was no haggling on my part," Botts said. "When he asked me to be a part of it, I wanted it. I wanted to be here because I know that we're going to do really good things here."

He added: "I think we have one of the best staffs in mid-major basketball, probably in college basketball in general. ... If I can ride on the coattails of this staff and add any value that I can, that's what I'm going to do." 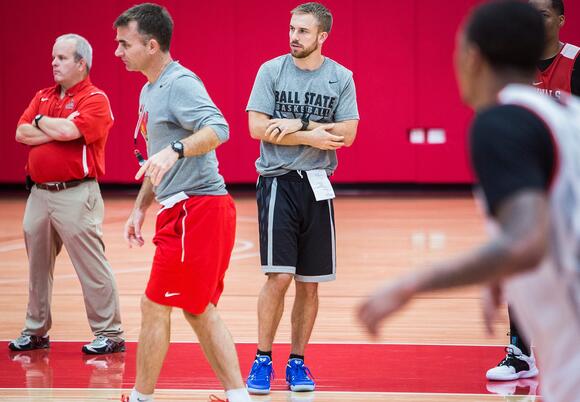 This season is Botts' fifth as an assistant coach at Ball State. He joined the staff in May 2018 after spending the previous four years at Purdue Fort Wayne, where he graduated in 2011 as an All-Summit League Second Team selection and one of the program's all-time scorers.

As a player, he helped lead the Mastodons to their first two winning seasons as an NCAA Division I team. As a coach, he helped guide them to four consecutive postseason appearances, including the school's first trip to the NIT in 2016. Prior to PFW, Botts served as the director of basketball operations at Princeton (2013-14) and was a graduate assistant for two years at Xavier, including during its Sweet 16 run in 2012.

Though Ball State had a limited roster this spring and saw three players — Luke Brown (Stetson) , Tyler Cochran (Toledo) and Miryne Thomas (Kent State) — transfer, Botts said he was impressed with the limited spring practice the Cardinals had and seems excited about where the program is headed.

"I thought we had a great spring ... the guys laid it all on the line," Botts said. "Coach Lewis has brought in his energy level and it's contagious and those guys, to their credit, they worked their tail off. I think we're going to have a great summer.

"Obviously, we've got to add a couple pieces to get a full roster," — Botts said before Ball State announced the additions of transfers Kaiyem Cleary (Florida Southwestern State) and Thomas Allen (North Carolina State) along with Micah Bell (Link Year Prep) — "but I think things are looking really good for us."

Robby General covers Ball State and East Central Indiana high school sports for The Star Press. Contact him via email at rgeneral@gannett.com or on Twitter @ rgeneraljr .

This article originally appeared on Muncie Star Press: As a recruit, Ben Botts turned down Michael Lewis. As a coach, Botts couldn't refuse

We're the home page of Muncie Indiana news and sports with in depth and updated Muncie local news.