‘Downton Abbey’ star Kevin Doyle stands up for ‘sad’ character: ‘He has a pair!’ 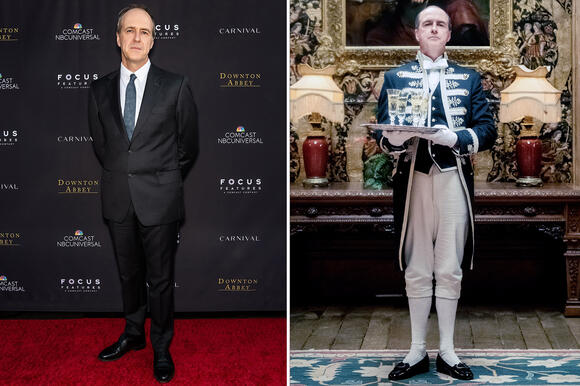 Kevin Doyle is quite protective of his “Downton Abbey” character, valet/footman Joseph Molesley.

When The Post suggested that Molesley could be a tad tepid and perhaps “grow a pair,” Doyle took issue.

“I disagree with that, actually,” he said in a recent interview. “I know some people sort of think that way about him but I think he’s got a really beautiful spirit about him. The thing about him is that he has been thwarted a lot in his life.

“He’s had a lot of sadness in his life, I think,” Doyle continued. “And what’s been lovely in the last few years especially is seeing him move away from that sadness and obviously characters like Mrs. Baxter [his love interest, played by Raquel Cassidy] helped him with that.

Doyle also noted that Molesley has been “thwarted a lot in his life. I think he’s clearly an intelligent man but was never able to use what he has because his life was predetermined. He was expected to have a certain kind of career and that was going to be it. And that must have been a terrible frustration. I think (creator) Julian Fellowes explores that a lot in the show, especially the TV series.”

And even though Molesley manages to break free from the shackles of his class in “ Downton Abbey: A New Era, ” that doesn’t mean Doyle thinks it’s possible for many in the UK, even now.

“I mean, people like to think in Britain that it’s, you know, society’s changed a lot,” the Lincolnshire-born actor said. “But I’m a little bit more skeptical. I think it’s still very sort of, in some ways, it’s still very class-bound and probably will remain so. For a number of years.” 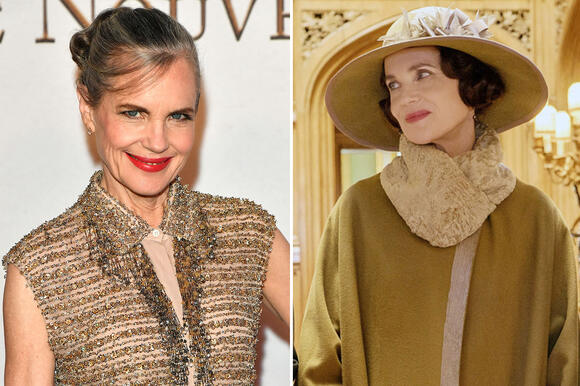 The “Happy Valley” actor, 62, noted that it’s very unusual for British actors to play the same character for as long as the crew of “Downton Abbey,” a series that has spanned six seasons starting in 2010 and now includes two movies.

He admitted that by the time the show ended, the actors were finding it “becoming fairly relentless,” but the three-year break between movies has whetted their appetites for the social intricacies of England in the flapper age.

The new film takes place partly in the South of France.

So does Doyle have his own sumptuous villa bought with his “Downton Abbey” checks?

“Yes, and it’s enormous!” he quipped.

“Downton Abbey: A New Era” is out May 18 in theaters and streaming on Peacock 45 days later.

“King of Pop” Michael Jackson’s family has been all over the news lately. The late pop star’s ex-wife Lisa Marie Presley passed away on Jan. 12. His daughter, Paris Jackson, attended the Los Angeles premiere of the documentary Pamela, a love story on Monday, Jan. 30. And that same day, Michael’s son Prince Jackson congratulated cousin Jaafar Jackson on his role as the “Thriller” singer in the upcoming biopic Michael. But what about Michael’s other son? Where is Blanket Jackson now?
LOS ANGELES, CA・1 DAY AGO
The US Sun

GOOD Morning America’s Lara Spencer was forced to take a backseat during the finale of yesterday’s show. Viewers were treated to a live performance from Cheat Codes and the country singer MacKenzie Porter at the close of Monday’s episode. Lara, who has been wearing a protective boot...
1 DAY AGO
New York Post

Bad Seeds frontman Nick Cave said he’s lost his “rage, anger, and hatred” after the death of his two sons. The rocker, 65, suffered an unimaginable loss when two of his children died in 2015 and 2022, respectively. Responding to a fan’s note in his Red Hand Files newsletter, the “Where the Wild Roses Grow” hitmaker said everything was flipped upside down after he got the devastating news. The fan’s message read: “When did you become a Hallmark card hippie? Joy, love, peace. Puke! Where’s the rage, anger, hatred? Reading these lately is like listening to an old preacher drone on and on at Sunday mass.” Cave’s...
1 DAY AGO
New York Post

Prince Harry won’t have the final say on “Spare” just yet. In response to his son’s bombshell memoir, King Charles III is said to be preparing to share his side of the story, according to a royal source. The British monarch, 74, will be the subject of a highly anticipated BBC profile ahead of his coronation on May 6. Insiders speculate that Charles could use the interview as an opportunity to discuss recent claims about the royal family made by the Duke of Sussex, 38, in his best-selling book. “Plans are already up and running for coronation coverage at the BBC, including the profile...
1 DAY AGO
New York Post

Jeffree Star claims he exposed “insecure” NFL wives — referring specifically to Saryn Anderson, wife of Carolina Panthers defensive end Henry Anderson — as fans continue to try to identify his mystery “NFL boo.” Saryn allegedly messaged Star on Instagram, asking the 37-year-old makeup guru Tuesday to stop sharing cryptic pictures and clues about his new football-playing boyfriend because people apparently think it’s her husband. Carl Nassib of the Tampa Bay Buccaneers is the only openly gay player in the NFL, but he recently went public with his boyfriend, Danish Olympic swimmer Søren Dahl. Fans may be hypothesizing that Henry is the man standing with his back turned to...
1 DAY AGO
New York Post

“Pineapple Express” star Seth Rogen is organizing a sleepover with an elevated itinerary.  As part of a promotion for his cannabis and homewares company, Houseplant, Rogen is inviting fans to stay over at a California property stocked with a variety of the company’s wares. Rogen, 40, will be present for all three of the one-night stays set to take place this month at the Los Angeles home, which is his “his creative retreat,” according to press materials.  The sleek modern space is outfitted with midcentury-modern furniture, Rogen’s own ceramic creations, a yard, “a thoughtful selection of plants,” a fully stocked fridge and a...
LOS ANGELES, CA・46 MINUTES AGO
New York Post

Jamie Lee Curtis never thought she’d get to the point where she’d be receiving an Oscar nomination. The scream queen was nominated for Best Supporting Actress for her role in “Everything Everywhere All at Once” — but she’ll never forget her humble beginnings.  “I’m 64 years old. I’ve been an actor since I was 19,” she told AP Entertainment. “I made horror films and sold yogurt that makes you s—t. I never thought I would hear my name at the Oscars.’ The “Halloween” star is referring to the commercials she did for the yogurt brand Activia, a probiotic yogurt that “supports gut health.” Curtis...
4 HOURS AGO