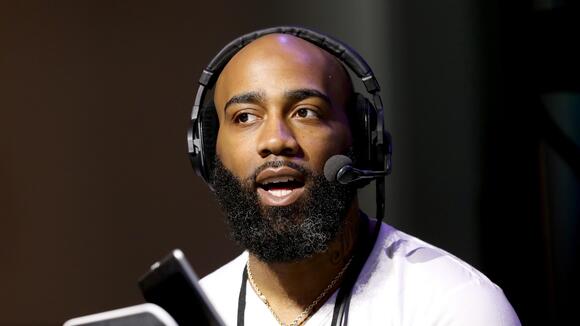 Former Washington defensive back DeAngelo Hall has a lot to get off his chest about the Commanders, some of which even includes, as he described it, "deeper underlying issues."

As a starting off point, Hall was critical of Washington not pursuing free agent corner James Bradberry, who ultimately signed elsewhere in the division on a one-year, $7.5 million deal with the Philadelphia Eagles. It's Hall's opinion that the Eagles have made major improvements this offseason while the Commanders have largely been passive participants.

"It's going to change the landscape of the division and it's not simply the James Bradberry move," Hall said. "It's in whole the approach this offseason. It's going and getting a guy like [rookie defensive tackle] Jordan Davis. It's understanding that [rookie linebacker] Nakobe Dean is a baller, no matter where he is in the draft and bringing him on your football team. It's so many of those little things — Haason Reddick, the pass rusher from Carolina. I mean it's a lot of those moves collectively — A.J. Brown — that have you saying 'wow.'"

"I don't like the Eagles, but I'll tell you what, it's gonna be hard to beat the Eagles because they're loading up," he said. "And it's frustrating as a fan when you see your team not load up. You know what I mean? You think about all the coulda, woulda, shouldas in the scenario and so, yeah, the price of winning the division has just gone up, fellas."

"I just think sometimes when you have guys who are singularly focused at the top down, it just makes it hard, it makes that environment hard. It makes doing the right thing long term different than doing the right thing right now," he said. "I almost equated it to like inflation, right? Say the price to win the division was a dollar, right? We had 75 cents last year. We think, oh, because we got Carson Wentz, 'We just added another piece. We have our dollar, guys! We're ready!' And it's like, 'Dude, nah man. Inflation prices now are two dollars, so don't know if you guys are gonna make the dance or not because the price just went up.'

"And that's the league, right? It's constantly evolving, man, and I just feel like when I watch this team, it never fricking evolves. It just, it stays the same. And if you were successful doing something, instead of trying to go back and figure out what we did that worked, what we didn't do that didn't work, we just kind of stay status quo and say, 'Alright, it's gonna be as simple as it was.'"

"With me, I've got deeper underlying issues, I mean, because I'm looking at the game differently," he said. "It's not just the chess piece of players. It's actually the guy who's moving the pieces. So now I go look at your coordinators. And I'm just like, no matter what pieces you give Scott Turner, that offense I've seen since he's been here, it's bad. It's bad when you talk about watching Sean McVay execute an offense, when you talk about watching Josh McDaniels, Mike McDaniel."

"All of these guys," he continued, "when you literally watch the game and how the run game marries with play-action pass and how guys come off the ball, and how you know we're doing this, yet we can still get positive yardage and positive plays, on both sides of the ball. To me I just feel like we're kind of playing with one hand tied behind our back, too."

As far as the addition of Carson Wentz, Hall said he actually felt more confident about the Commanders' offseason before they acquired the quarterback from the Colts.

"To me the defense was a glaring spot, right," he said. "To have a guy like Chase Young go down and this defense almost plays better was a little bit mind-boggling to me. To have your first-round pick in Jamin Davis not be as instrumental in the success of this defense was head-scratching, calling games and not even seeing the dude out there until the fourth quarter, because somebody's hurt or tired. William Jackson, the cornerback — to me, the secondary didn't make as many plays as you needed to.

"And so to me as a whole, I thought the defense underwhelmed. I think offensively you have to be able to push the ball down the field. You've gotta scare defenses. You've gotta scare DBs like me. And watching this offense, I saw no one scared of it. And you have the players. Obviously it was not having Curtis [Samuel] out there all season, but even not even incorporating in Dyami Brown into the offense, a guy that you spoke so highly of."

This brought Hall to a much larger concern: that Ron Rivera has continued his track record on from Carolina of being an average head coach here in Washington.

"And so to me, it's a lot of things that I kind of point to and I'm just like: I've got to see it. I mean I personally need to see it," he said. "Because, as much as I love Ron as a person, I've always thought his coaching resume was just kind of average, guys. And I know this is gonna make waves, me saying that, but it shouldn't. It's the truth.

"You look at what they've done in Carolina, you look at how he got here. You look at Cam Newton and if he ever really developed as a quarterback. No. And so it's still so many question marks I still had, just as a guy who eventually wants to be in the job of picking head coaches to run my organization, you know? Those are just some of the questions that I always raise, man, no matter what hires or what happens throughout the course of the league."

Hall also addressed why he decided to step away from the Commanders radio booth in April, after two seasons on the job, and offered his thoughts on his replacement, former Washington teammate London Fletcher. It seems that Hall's conflict with how the organization was being run made it challenging for him to offer commentary on the games.

"I'm not a part of the Washington broadcast team anymore," Hall said. "It just felt like it wasn't the right situation for myself. London Fletcher, I love everybody I was working with — Bram, Julie. Absolutely love those folks. I'll still be doing some stuff with 'em when Julie reaches out. But so hyped for London Fletcher, man."

"I told Julie and Fletch at separate times that Fletch was such a great teammate and just an inspirational person in my life and in my process of growing as a pro and as a man," he said. "It taught me so much about the game. I couldn't be happier that she gets a hell of a replacement in London Fletcher, man. So I'm hyped for those guys, but I'm too pretty to be on the radio, guys. I need some more face time. I'm fighting to get in one of them booths, man.

"But like I said, I need to see it. I'm a fan first, and it made it hard sometimes to go to work 'cause my vision of what I thought it should be wasn't what ultimately the decision-makers and what they wanted to do," he continued. "You know how I am, guys. I'm gonna speak my mind, and so it's best for me to go my separate way. Still love the organization. Still rooting for 'em. But I'll tell you what, it's gonna be a dog fight in that division."

As Washington falls to 1-3 on the season with a loss to Dallas, Eric Bickel of The Sports Junkies thinks it’s time for drastic changes and is calling for Ron Rivera to have some dignity and resign as Commanders head coach.
WASHINGTON, DC・9 HOURS AGO
106.7 The Fan

Commanders – lipstick on a pig

It’s completely unfair to change quarterbacks after just one month. The Commanders’ problems don’t start with Carson Wentz, but with coaching. The franchise can change the name and uniforms, but it’s just lipstick on a pig.
NFL・11 HOURS AGO