Moose on the Loose: The rise and fall of Matt Harvey 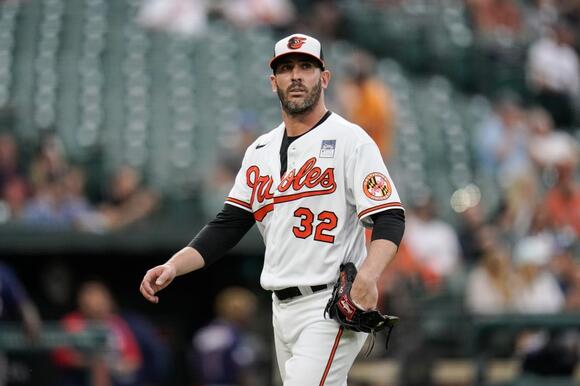 It’s a hard fall for Harvey, who was a first-round pick for the Mets in 2010. He made his debut two years later, setting a club record in the process.

Harvey was tagged “The Dark Knight” in New York City, but injuries mounted and led to a less-than-heroic departure.

PIX11 News’ Marc Malusis has more in the video above.

Mets to take on Braves – and Ian – in pivotal divisional series

NEW YORK (PIX11) — With six games left, the Mets are headed to Atlanta to take on the Braves. New York currently holds a one-game lead over Atlanta in the National League East, with a pennant-clinching opportunity on the line in the three-game series. As the South prepares for Tropical Storm Ian, the Mets are […]
QUEENS, NY・2 DAYS AGO
PIX11

Mets, Yankees both headed to postseason

NEW YORK (PIX11) — It is a good time to be a baseball fan in New York. This year, both the Yankees and the Mets are headed into post-season play. They’re both looking good and that means fans of New York are excited. But the weather and the remnants of Hurricane Ian could be a […]
QUEENS, NY・3 DAYS AGO
PIX11

Jets hit the road to battle the Steelers

NEW YORK (PIX11) — Jets insider Greg Buttle joined The Moose on NY Blitz to discuss how the Jets can beat the Steelers on the road this weekend. Watch the video player for the full interview.
PITTSBURGH, PA・10 HOURS AGO

Cash for ‘Bloods’ tucked in box of water bottles: feds

BROOKLYN, N.Y. (PIX11) — Prosecutors trying a mob-related murder-for-hire case in federal court ended their Thursday session in a dramatic fashion when they showed the jury a box filled with water bottles and wads of cash stuffed in between them. The federal government alleged Anthony Zottola paid the Bloods gang to murder his 71-year-old father, […]
BROOKLYN, NY・2 DAYS AGO
PIX11

BROOKLYN (PIX11) — Emergency 911 calls played at the federal trial of Anthony Zottola, who’s accused of hiring the Bloods gang to kill his mob-connected father, reveal a McDonald’s manager witnessed the murder through the drive-thru window. “Somebody got shot in the parking lot,” the manager said to the 911 operator on Oct. 4, 2018.  […]
BRONX, NY・3 DAYS AGO
PIX11

CROWN HEIGHTS, Brooklyn (PIX11) —  A makeshift memorial for a 17-year old girl shot and killed outside a Crown Heights apartment building grew on Thursday. Flowers, balloons and candles lined the entrance to the spot on Eastern Parkway in Crown Heights where 17-year old Shayma Roman lost her life around 6:15 p.m. on Wednesday. Police […]
BROOKLYN, NY・2 DAYS AGO
PIX11

NEW YORK (PIX11) — Hurricane Ian’s harsh winds caused severe damage in Florida’s Tampa Bay area. Abigail Camacho is a resident of Lutz, Florida, which is just north of Tampa. She joined PIX11 Morning News on Thursday to talk about Ian’s impact on her neighborhood. “We do not have power,” Camacho said. “Very heavy winds […]
LUTZ, FL・2 DAYS AGO

Man fatally slashed in the neck while riding the subway in Brooklyn: NYPD

BROOKLYN, N.Y. (PIX11) — A man died Friday after he was slashed in the neck while on board a subway train in Brooklyn, police said. Tommy Bailey, 43, got into an argument with a man while riding a southbound L train near the Atlantic Avenue subway station around 8:45 p.m., according to authorities. The unidentified […]
BROOKLYN, NY・1 DAY AGO
PIX11

BROOKLYN (PIX11) — A jailhouse phone call played at the “murder for hire” trial in Brooklyn federal court alluded to a Bloods leader, Bushawn “Shelz” Shelton, recruiting gang members for the operation. “I thought it was a job! A 9-5,” one man said during the call.  “I thought he’s talking a real 9 – 5. Instead, […]
BRONX, NY・1 DAY AGO
PIX11

SUNSET PARK, Brooklyn (PIX11) — Police are asking for the public’s help finding the assailant who stabbed a man during a robbery in Sunset Park earlier this month. The 42-year-old victim was walking along 56th Street near Fifth Avenue around 3:45 a.m. Sept. 11 when a man snatched his gold chain off his neck, according […]
BROOKLYN, NY・3 DAYS AGO
PIX11

BELLMORE, N.Y, (PIX11) — Four men were arrested on Wednesday for selling THC gummies at Bellmore Cigars, Vapor, Lotto Store on Long Island, police said. After getting a search warrant, police found large amounts of THC products and money. Police also determined that THC gummies were being sold at the store, according to officials. Police […]
NEW YORK CITY, NY・2 DAYS AGO

FLORIDA (PIX11) — When Lauren Sweeney heard of the potential damage Hurricane Ian would bring to her area, she evacuated her home in Fort Myers on Wednesday morning. The law student and former TV reporter fled to her mother’s house in Orlando with her two little girls, the youngest being 5 months old. Sweeney joined […]
FLORIDA STATE・2 DAYS AGO
PIX11

CENTRAL ISLIP, Long Island (PIX11) — A man crashed his car on Long Island and doctors later found a bullet wound, police say. Carlos Guillen, 19, was driving east on Francisco Avenue when he hit a parked trailer and fence around 12:30 p.m. Saturday. Police said Guillen was taken to the hospital, where doctors found […]
ACCIDENTS・10 HOURS AGO
PIX11

Exclusive: NYPD officer beaten in the Bronx details attack that turned his life upside down

UNIONPORT, the Bronx (PIX11) — It’s been more than a month since an off-duty NYPD officer was beaten in the Bronx, but he’s still dealing with an immense amount of pain, the officer told PIX11 News in an exclusive interview Thursday. Muhammad Chowdhury, an 18-year police veteran, was in a coma after he was beaten […]
BRONX, NY・2 DAYS AGO
PIX11

The death toll was expected to increase substantially once emergency officials have an opportunity to search many of the hardest-hit areas.
TAMPA, FL・2 DAYS AGO

How to help victims of Hurricane Ian

TAMPA, Fla. (WFLA) — Hurricane Ian caused widespread destruction on its way through Florida. The storm made landfall as a Category 4 storm Wednesday afternoon on Florida’s southwest coast. Millions were left without power, homes flooded from storm surge, roofs were ripped apart and some roads were impassable due to debris and downed power lines. […]
FLORIDA STATE・2 DAYS AGO
PIX11

NEW YORK (PIX11) — Volunteers from New York City are headed to Florida Friday to help victims of Hurricane Ian’s widespread destruction. The American Red Cross in New York will deploy an emergency response vehicle and two volunteers to support ongoing relief efforts. They are set to head out around 10:30 a.m. from their 49th […]
NEW YORK CITY, NY・2 DAYS AGO
PIX11

Wilson cleared by doctors, will start for Jets at Pittsburgh

FLORHAM PARK, N.J. (AP) — Zach Wilson was back under center for the New York Jets, taking snaps and preparing to start for the first time this season. “It’s the happiest I’ve been in a month,” the second-year quarterback said with a big smile Wednesday. Coach Robert Saleh announced Wilson will make his season debut […]
NFL・3 DAYS AGO