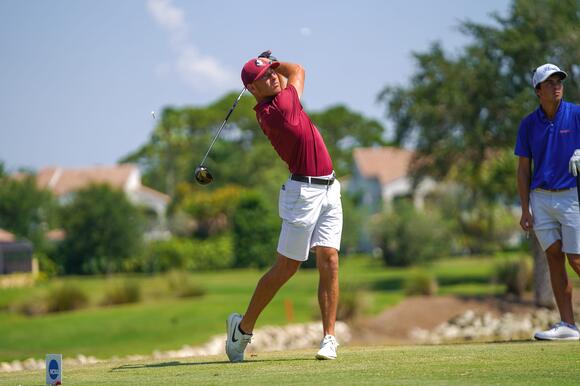 A two-round flourish over the last two days allowed Florida State Men’s Golf to cruise into the NCAA Championship, finishing second at 8-under (297-279-280) at the NCAA Men’s Golf Regional held at PGA National Resort in Palm Beach Gardens, Fla.

The Top 5 finish means the Seminoles will participate in their 27th NCAA Championship and their second in as many years beginning next Friday, May 27, at Grayhawk Golf Club in Scottsdale, Ariz.

Adding to the heavy dose of good news is sophomore Brett Roberts shooting an overall score of 7-under (74-68-67) to win the NCAA Palm Beach Regional title amongst 80 competitors. Roberts becomes the fourth Seminole to win an NCAA Regional and the first since Drew Kittleson won the NCAA Central Regional on May 22, 2010.

The victory for Roberts marks his first as a Seminole.

“This was a true team effort this week,” FSU head coach Trey Jones said after helping the Seminoles to their 10th NCAA Championship under his watch. “I’m really comfortable going out there knowing we have five guys, and then our sixth guy in Patrick McCann, who we can call on at any point in time.”

After recording the lowest team score in the second round, FSU almost accomplished the same feat in Wednesday’s final round. The Seminoles combined to shoot 8-under on the day as Roberts took command with a 5-under 67 on Wednesday. The Coral Springs, Fla., native delivered five birdies and an eagle, which came on the par-5, 545-yard 10th hole.

The par-5 10th hole was kind to the Seminoles. FSU registered nine birdies and an eagle in 10 of its last 11 trips to the 10th hole.

Roberts’ round was punctuated by a final birdie on the 18th hole, another par-5 that he took advantage of to help give him a two-stroke cushion.

Over the last two rounds, the Seminoles combined to shoot 17-under to pull out from eighth place to a runner-up spot on a very difficult course. Senior transfer Dan Bradbury earned a Top 10 finish in eighth, shooting 2-under overall (77-67-70).

The Wakefield, England, native was strong once again in his final round, scoring three straight birdies early in the round to set the tone for another big day.

“When you look at things – Dan (Bradbury) coming off an emergency appendectomy during the ACC Championship, and who had not played tournament golf in over five weeks…The way he played really was impressive.”

Redshirt sophomore Cole Anderson got the job done this week, tying for 19th at 3-over (73-71-75).  Anderson recorded three birdies in his final round and provided the Seminoles a vital boost as one of three to finish in the Top 20.

“Cole Anderson is playing as well as anyone in the country. Just a couple big holes or Cole would have had a chance to win this golf tournament.”

Sophomore Frederik Kjettrup had an eagle in his final round on the par-5, 538-yard third hole and placed 27th at 5-over (75-73-73). Senior Michael Sakane produced his best round of the regional on Wednesday, tying for 32nd at 8-over and shooting a 70.

The Seminoles walloped the par-5 holes all week, combining to shoot 35-under with an average score of 4.42. Roberts shot 10-under in par-5 scoring, tied for the third-lowest in the field.

Vanderbilt won the tournament title after shooting 20-under. Behind FSU and advancing in the Top 5 were Florida (-2), USF (+12) and College of Charleston (+14).