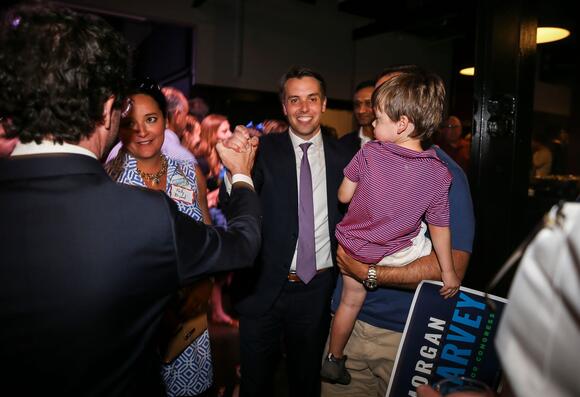 McGarvey said he was feeling a mix of emotions Tuesday night after he was declared the winner.

"It's excitement. It's relief. It's also knowing that tomorrow we're going right back to work, because we do have to continue building those coalitions, bringing people together, so that we can win again in the fall," he told The Courier Journal. 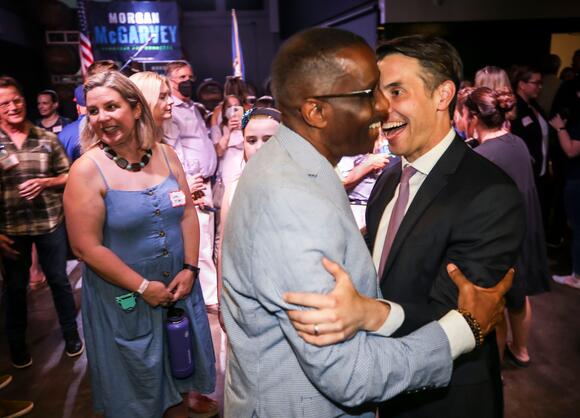 On Wednesday morning, Scott posted a lengthy statement on Facebook in the wake of her election night loss.

"I woke up this morning with my mind stayed on freedom even though we did not win our primary election last night," she said. "Thank you to all of the folks who voted for our campaign yesterday. You matter and no one can diminish your vote."

"We certainly were not outworked, but we were definitely outspent," she continued. "It took nearly $2 million to defeat our people-powered campaign. Yes, you are that strong. Yes, working class folks should continue to run."

On the Republican side, Stuart Ray and Rhonda Palazzo were in a dead heat with 29% of vote at the time the Democratic race was called. They stayed neck-and-neck throughout the night.

"We had a large group of strong candidates, and many of us had like-minded philosophies, so we knew this would be a close race. I want to thank them for the challenge, running upstanding campaigns, and I look forward to working with each and every one of them in the best interest of our city," he said in a statement.

The Jefferson County board of elections certified the election results — including Ray's defeat of Palazzo in the Republican primary for Yarmuth's seat — Friday after provisional ballots were reviewed.

Before the results were certified, Palazzo said Wednesday afternoon that she will request a recanvass, which involves double-checking the vote counts.

"I owe it to every voter of Kentucky's Third United States Congressional District to make sure that every single vote has been accounted for accurately," she said in a statement.

Huber, of the Jefferson County Clerk's office, said Kentucky law permits a recanvass if there's a difference of less than 1% between vote totals. (That's the case here.)

McGarvey and the Republican victor will face off in the November election to determine who will succeed Yarmuth. However, McGarvey has an undeniable edge in that race, since the 3rd Congressional District is solidly Democratic. (Yarmuth has held onto his seat for 15 years.)

Here's a closer look at the results of Tuesday's primaries for Kentucky's seats in the House of Representatives:

Both state lawmakers spent many months campaigning for the support of Democratic voters in Kentucky's 3rd Congressional District, which covers most of Jefferson County.

Scott jumped in the race first , in July 2021, before Yarmuth had announced his retirement. However, McGarvey racked up a big fundraising lead, and fast, after he got in the race in October — less than 10 minutes after Yarmuth announced he wouldn't run for reelection.

McGarvey kept building on that lead, outraising Scott by around 6-1 and bringing in over $1.5 million to his campaign as of April 27 versus Scott's roughly $236,500 haul. 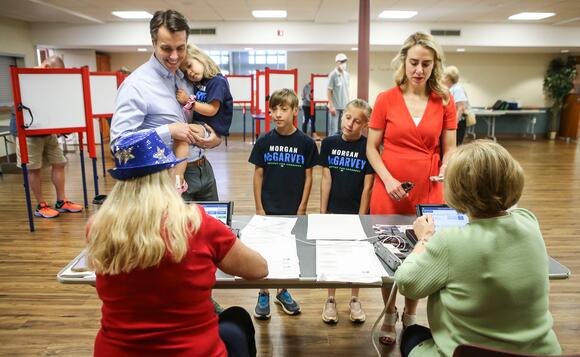 He also scored endorsements from a bunch of former and current elected officials in Louisville and across the state. (Scott also secured endorsements, many of which came from various progressive groups within and outside of Kentucky.)

The biggest endorsement McGarvey got came from Yarmuth himself, who personally asked the state senator to consider running for his seat and gave him a one-day heads-up about his retirement announcement.

On Tuesday night, McGarvey said he started building support "in every corner of our community" from the first day he got in this race, and he did that by listening and bringing groups together.

"I think that's what we need to do starting tomorrow morning: Continue to bring people together so that we can unite around the problems that face us," he said. "I think people in Louisville want someone to go to Congress like John Yarmuth, who's willing to work and solve big problems. That's what we're going to do, and that's what our message is going to be."

Both McGarvey and Scott presented themselves to voters as progressive candidates. They mirrored each other's positions on many, but not all , policy issues.

McGarvey's big pitch has been his ability to build coalitions and get policies enacted, as evidenced by getting 18 of his bills passed even while the GOP controlled the state Senate. However, he also has stressed that he will continue to stand up for progressive principles, such as abortion rights. 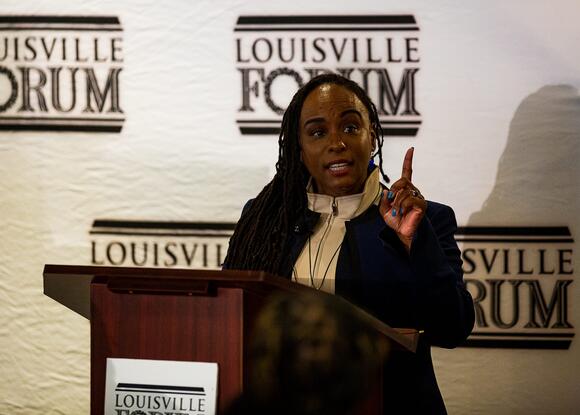 Scott's major message focused her work as an advocate for justice across all sectors of American life and as a voice for communities that historically have been ignored in the halls of power and with whom she shares many life experiences as a Black woman who's faced poverty.

She became the first Black woman elected to the state legislature in 20 years when she won in 2016, and she spoke during her campaign launch about what it would mean "to celebrate, elevate and recognize" Louisville's diversity by electing a Black woman to Congress for the first time in Kentucky history.

Looking back at the race, McGarvey said this was "a hard-fought campaign, as primaries often are."

"I'm happy that it stayed positive, that we really brought energy and attention to issues that I think we all know need facing," he told The Courier Journal. "We need to work on health care, we need to make sure that our education system's getting better and that people feel safe in their homes and in their communities."

In her statement Wednesday, Scott said she knows tens of thousands of voters sat out this election because they're "fed up with the democratic party, politics as usual, and the often insurmountable role of money in politics.

"I hear you. It’s why I took the bold step of running against a long term incumbent," she said. "I’m proud of our folks for running a robust, vibrant campaign even though the odds were never in our favor.

How the other 4 House primaries went

Guthrie earned 78% of the vote, per the latest election results available as of 11:30 p.m. Tuesday, in the three-candidate GOP primary for his 2nd Congressional District seat, which now includes the easternmost part of Jefferson County following Republican state lawmakers' recent redistricting .

Hank Linderman of Falls of Rough won the Democratic primary for Guthrie's seat, earning 58% of the vote and defeating William Dakota Compton of Bowling Green, who received 42% of the vote, as of 11:30 p.m. Tuesday.

Massie won his multi-candidate primary for the 4th Congressional District with 75% of the vote, as of 11:30 p.m. Tuesday.

He will face Democrat Matthew Lehman of Newport, who was unopposed in his party's primary, and independent candidate Ethan Keith Osborne of Covington this fall.

Rogers won his primary for the 5th Congressional District with 82% of the vote as of 11:30 p.m. Tuesday.

He'll face Democrat Conor Halbleib of Louisville, who had no primary challengers, this fall.

Barr won his primary for the 6th Congressional District with 88% of the vote as of 11:30 p.m. Tuesday.

Geoffrey "Geoff" Young of Lexington won the Democratic primary for Barr's seat, earning 52% of the vote and defeating Chris Preece of Berea, who got 48% of the vote, as of 11:30 p.m. Tuesday.

All Kentucky's Republican House members are widely expected to win their reelection bids in the increasingly conservative state.