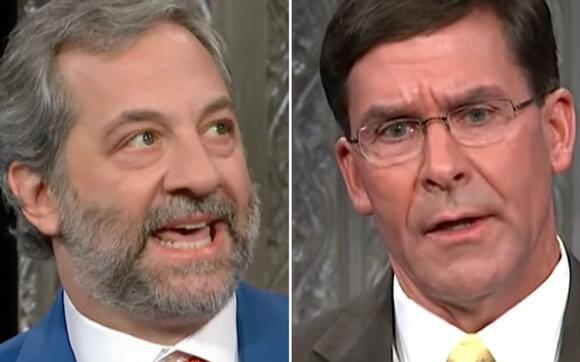 Judd Apatow was promoting his documentary on the late comedian George Carlin on Monday when “ The Late Show ” host Stephen Colbert gave the filmmaker a detour he couldn’t resist. (Watch the video below.)

Colbert had just interviewed Mark Esper , the former secretary of defense under Donald Trump . Esper was hawking his new book in which he revealed Trump wanted to fire missiles into Mexico, shoot protesters against police brutality in the legs, and reactivate military officers to court martial them for criticizing the former president’s actions.

“I don’t think George Carlin would like Mark Esper,” the “The King of Staten Island” director said.

“Why not?” Colbert asked.

“Because Carlin’s whole idea was that people with money manipulate the whole system,” Apatow replied. “So if somebody knows that Trump is a maniac, and you would think the day after he gets fired is the day to go, ‘Hey, he wanted to shoot all the George Floyd protesters in the legs.’ But he waits a year to write a book and he makes money. And I think that was George Carlin’s whole thing, which is he just thought, they’re not looking out for you.”

It should be noted that Colbert grilled Esper about putting book profits before informing the public, but Esper replied that if he had disclosed Trump’s outlandish ideas, he would have been fired on the spot and unable to stop them. (He was eventually canned just days after the 2020 election.)

William Barr, John Bolton and Stephanie Grisham are also among former Trump administration officials who have written tell-alls. Critics say some could have done more good revealing their information earlier than waiting to cash in on their books, The Washington Post noted .

Check out Apatow’s comments on Esper at 6:40:

The then-president's daughter and son-in-law were reportedly unaware of the very public way they were about to be canned from their White House roles.
POTUS・15 HOURS AGO
HuffPost

While speaking at the White House Conference on Hunger, Nutrition, and Health on Wednesday, President Joe Biden gave a much-deserved shout-out to Rep. Jackie Walorski, an Indiana Republican who served as co-chair of the House Hunger Caucus. That’s “served” in the past tense. Walorski died in August.
INDIANA STATE・9 HOURS AGO
HuffPost

Donald Trump reportedly made a racist assumption about a group of racially diverse congressional staff members at a White House reception held early in his presidency. According to an advance copy of New York Times reporter Maggie Haberman’s book, Confidence Man, which was obtained by Rolling Stone, Trump assumed the staffers were waiters ― and told them to get some food.
POTUS・18 HOURS AGO
HuffPost

Fetterman's tattoos commemorate those who died violently when he was mayor of Braddock, Pennsylvania.
PENNSYLVANIA STATE・2 DAYS AGO
Business Insider

Trump did not want to condemn white supremacists right away during his 2016 campaign. That's according to NYT's Maggie Haberman's forthcoming book, "Confidence Man." Trump told Chris Christie that "a lot of these people vote," referring to white supremacists. Then-2016 Republican presidential candidate Donald Trump did not immediately condemn white...
POTUS・13 HOURS AGO
HuffPost

"Obviously this means the lawyer must have given Trump actual legal advice," mused one social media wit.
POTUS・1 DAY AGO

"The Tonight Show" host mocked an ad from the House GOP that celebrated America's rich heritage while featuring clips from Europe.
TV & VIDEOS・18 HOURS AGO
HuffPost

Trevor Noah thinks Donald Trump might like to consider voting for President Joe Biden in the next election. “The Daily Show” host pointed out in Tuesday’s monologue that Trump had recently rejoined the Forbes 400 list of the nation’s richest people at No. 343. The former president had dropped off the list last year for the first time in 25 years.
PRESIDENTIAL ELECTION・21 HOURS AGO
HuffPost

The celebrity chef argued with the Italian star in the days and hours before his death at age 61.
CELEBRITIES・10 HOURS AGO
HuffPost

Lara Trump made a big splash on social media Wednesday, but probably not in the way she intended. Trump — who is married to Eric Trump, the second-born son of former President Donald Trump — posted a video on Instagram showing her 5-year-old son riding a toy bulldozer on a Florida street while rains from Hurricane Ian pour down on both of them.
POTUS・7 HOURS AGO

ABC host George Stephanopoulos was in disbelief Sunday after Sen. John Barrasso (R-Wyo.) danced around questions of whether U.S. presidents can declassify documents with their minds. Stephanopoulos asked the senator on ABC’s “This Week” if he agreed with former President Donald Trump’s recent assertion that he could declassify government materials...
POTUS・2 DAYS AGO
HuffPost

A bipartisan bill to fix an election loophole & prevent another insurrection is making its way through Congress and election-lie supporter Sen. Ted Cruz (R-TX) is vehemently against it.
ELECTIONS・13 HOURS AGO
HuffPost

The Florida Republican pretty much summed up what the GOP has become, said critics.
FLORIDA STATE・1 DAY AGO
HuffPost

The host of "Last Week Tonight" pointed out that the Florida governor can't even come up with his own bad ideas.
FLORIDA STATE・2 DAYS AGO
HuffPost

Former President Donald Trump reportedly prank-called a Michigan congresswoman after she voted to impeach him in 2019, according to a new book by New York Times reporter Maggie Haberman. Haberman described the prank call that Trump allegedly made to Rep. Debbie Dingell (D-Mich.) in a Twitter thread on Wednesday. Trump...
MICHIGAN STATE・5 HOURS AGO
HuffPost

The "Countdown" host said he went out with the Arizona lawmaker in 2010 and 2011, and had some thoughts about her alliance with Mitch McConnell.
ARIZONA STATE・1 DAY AGO
HuffPost

The right-wing podcaster hasn't served in the military himself, as many critics were quick to point out.
MILITARY・2 DAYS AGO