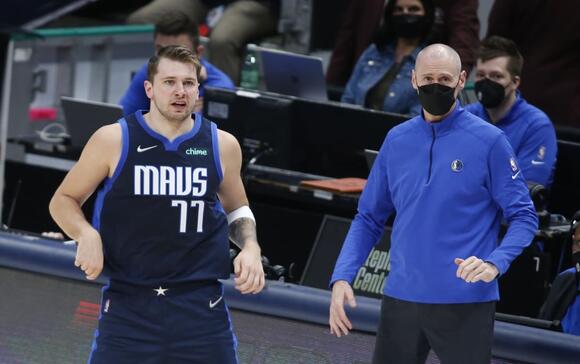 The Dallas Mavericks are set to face off against the Golden State Warriors in the Western Conference Finals. They were largely picked against by experts in both of their playoff series so far.

Even after taking down the 64-win Phoenix Suns with a historic 123-90 win in Game 7 on the road, the Mavericks are widely considered the least likely to win the 2022 NBA Finals.

Many were not expecting the Mavericks to make a run to the Western Conference Finals and the early consensus certainly favors the Warriors to win the series. However, former Mavericks coach Rick Carlisle sees a similar perception to how this year's team has made a run compared to 2011.

"This eerily reminds me of the 2011 run, because it started off not really with much expected," Carlisle told 105.3 The Fan on Monday. "A lot of people thought we were [going to lose to Portland].

"A lot of people predicted Utah would beat Dallas with Luka being out two or three games. And they took care of Utah, and the momentum has just continued to go.

"When you beat the best team in the league as decisively as they did yesterday, you are playing a high, high level of basketball."

Carlisle didn't sound all that surprised by the success the Mavericks are achieving. When his Pacers team played against Dallas back in January, he saw the makings of a real threat in the Western Conference based on their versatility on both ends.

"When when we played these guys [in Dallas back in January], I said at that time that Dallas was a real threat in the west," Carlisle said. "And the reason is their defense - it travels. They have great playmaking, great versatility both offensively and defensively. They've got five men that can switch, that can play big or small."

The Mavericks defeating the Suns should not be an understated feat. The Suns were a potent threat throughout the regular season the versatility of the Mavericks' defense took away what their main stars like to do best — use the gap to get into short-range for pull-up jumpers.

The Warriors are a more complex matchup since they have a quick trigger from beyond the arc after tireless off-ball movement, frequent screening actions, and dribble handoffs in the two-man game with Draymond Green. When two defenders get sent at Stephen Curry, Green goes to work in the short-roll.

The Mavericks will need to be ready to swarm around in the half-court defensively and contest shooters tightly, or get them off the 3-point line when possible. The Warriors are better equipped to defend small-ball than the Utah Jazz and Suns, too.

A general theme for the Mavericks has been that Luka Doncic gives them a chance against any matchup. Surrounding him with versatile wing defenders and shooters coupled with some guards that can create off the bounce, there's an evident formula for success.

Although it was just a preseason game, the Phoenix Suns shocked the sports world by losing to an Australian basketball team that was nearly a 30-point underdog. What will their opening night against the Dallas Mavericks look like?
PHOENIX, AZ・1 DAY AGO
DallasBasketball

Vegas has a lot of confidence in Luka Doncic to win the NBA's MVP award this season. However, that confidence is lowered when it comes to the Dallas Mavericks' place in the championship race.
DALLAS, TX・1 DAY AGO
DallasBasketball

NBA GMs expect Dallas Mavericks superstar Luka Doncic to win the MVP award during the 2022-23 season, based on the annual survey.
DALLAS, TX・22 HOURS AGO
DallasBasketball

The Dallas Mavericks open preseason play against the Oklahoma City Thunder in Tulsa on Wednesday night. Two key players have already been ruled out. Will Luka Doncic play?
DALLAS, TX・10 HOURS AGO

Mavs owner Mark Cuban offers the latest on Delonte West, still struggling to get on the right path.
DALLAS, TX・1 DAY AGO
DallasBasketball

Spencer Dinwiddie Ready for Major Mavs Starting Role: ‘Let’s Get to It’

Given Jalen Brunson's departure from the Dallas Mavericks, Spencer Dinwiddie will be relied upon in a major role.
DALLAS, TX・1 DAY AGO
DallasBasketball

Spencer Dinwiddie had a rough time with the Washington Wizards last season. After being traded to the Dallas Mavericks, his friendship with Dorian Finney-Smith helped him regain his confidence.
DALLAS, TX・23 HOURS AGO