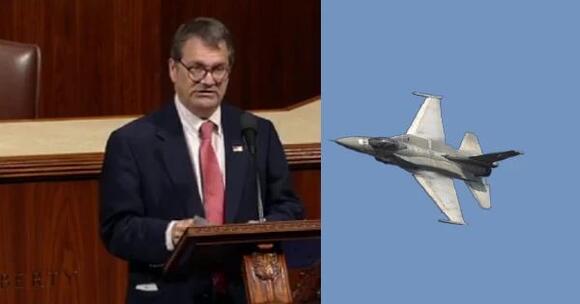 With the Biden administration backing the sale of 40 F-16s to Turkey, U.S. Rep. Gus Bilirakis, R-Fla., is leading bipartisan opposition on Capitol Hill.

Last month, Reuters reported that the administration wants to sell the planes to Turkey.

Reuters reported that Naz Durakoglu, who has been nominated to serve as assistant secretary of state for legislative affairs, sent a letter in March, praising Turkey’s support for Ukraine during the current Russian invasion.

“The administration believes that there are nonetheless compelling long-term NATO alliance unity and capability interests, as well as U.S. national security, economic and commercial interests that are supported by appropriate U.S. defense trade ties with Turkey,” she wrote

“The proposed sale will require a congressional notification if the Department of State were to approve it,” she wrote.

“Like many of my colleagues, I remain vehemently opposed to any sale,” said Bilirakis at the end of last week. “Unfortunately, Turkey has not changed its behavior when it comes to the S-400s and CAATSA, which is the underlying reason Turkey was dropped from the F-35 program. Turkey’s failure to change its behavior demands congressional disapproval of this sale.”

“I strongly oppose the Biden administration’s proposed sale of advanced weapons and equipment to upgrade Turkey’s F-16 fleet. Turkey has failed to address the issues that led to its ejection from the F-35 program and the imposition of CAATSA sanctions,” said Pappas. “Turkey’s increasingly belligerent rhetoric and behavior towards Greece, a reliable democratic NATO ally, also cannot be ignored. Turkish F-16s have flown over Greek islands and violated its airspace hundreds of times in recent weeks, and Turkey has launched a baseless campaign disputing Greece’s sovereignty over its eastern Aegean islands. We cannot allow the Erdogan government to escape accountability for violating U.S. law and the standards of the NATO alliance. Actions speak louder than words, and without any meaningful change on Turkey’s part I will continue working to prevent F-16s or any other American-made weapons from falling into Erdogan’s hands.”

“As co-chair of the Hellenic Caucus, I am deeply troubled by reports that Turkey may receive advanced and sensitive missile and radar capabilities, F-16 modernization kits and additional F16s,” said Maloney. “While Erdogan has recently increased his endorsements of international law and respect for sovereignty in his statements on Ukraine, he conveniently ignores Turkey’s continuous violations of both Cyprus’ and Greece’s sovereignty – including 40,000 Turkish troops still illegally occupying parts of the Republic of Cyprus. I made it clear last November in our letter on this issue: Turkey’s purchase and use of Russian S-400 missile systems in defiance of NATO standards and U.S. law, decades-long violations of the Republic of Cyprus’ sovereignty, and continuing destabilizing behavior in the Eastern Mediterranean and West Asia should disqualify them from receiving these systems.”

Back in November, Bilirakis, Maloney and Pappas led almost 40 other members of the U.S. House in sending a letter to U.S. Sec. of State Antony Blinken opposing the sale of the F-16s to Turkey. U.S. Reps. Charlie Crist, D-Fla., Ted Deutch, D-Fla., and Mario Diaz-Balart, R-Fla., signed the letter. Bilirakis and Maloney lead the Hellenic Caucus on Capitol Hill.

On Thursday, U.S. Rep. Gus Bilirakis, R-Fla., said President Joe Biden should have covered the entire state of Florida in his disaster declaration instead of just nine counties. “Despite the entire Florida federal delegation asking President Biden to declare all 67 counties a designated disaster area, the president only included...
FLORIDA STATE・1 DAY AGO
FloridaDaily

KYIV, Ukraine (AP) — After being encircled by Ukrainian forces, Russia pulled troops out Saturday from an eastern Ukrainian city that it had been using as a front-line hub. It was the latest victory for the Ukrainian counteroffensive that has humiliated and angered the Kremlin. Russia’s withdrawal from Lyman complicates its internationally vilified declaration just a day earlier that it had annexed four regions of Ukraine — an area that includes Lyman. Taking the city paves the way for Ukrainian troops to potentially push further into land that Moscow now illegally claims as its own. The fighting comes at a pivotal moment in Russian President Vladimir Putin’s war. Facing Ukrainian gains on the battlefield — which he frames as a U.S.-orchestrated effort to destroy Russia — Putin this week heightened threats of nuclear force and used his most aggressive, anti-Western rhetoric to date. Russia’s Defense Ministry claimed to have inflicted damage on Ukrainian forces in battling to hold Lyman, but said outnumbered Russian troops were withdrawn to more favorable positions. Kyiv’s air force said it moved into Lyman, and the Ukrainian president’s chief of staff posted photos of a Ukrainian flag being hoisted on the town’s outskirts.
POLITICS・45 MINUTES AGO
FloridaDaily

Last week, two Democrats in the Florida delegation on Capitol Hill–U.S. Reps. Sheila Cherfilus-McCormick and Frederica Wilson–urged President Joe Biden to pursue an “extension and redesignation of Temporary Protective Status (TPS) for Haitian migrants, and a moratorium on deportations to Haiti.”. The congresswomen led a letter to...
FLORIDA STATE・3 DAYS AGO

Sept 21 (Reuters) - President Vladimir Putin on Wednesday ordered Russia's first mobilisation since World War Two and backed a plan to annex swathes of Ukraine, warning the West he was not bluffing when he said he would be ready to use nuclear weapons to defend Russia. read more.
POLITICS・35 MINUTES AGO
FloridaDaily

The polling industry has faced criticism for underestimating Republicans through several cycles. Pollster Nate Cohn recently wrote that the 2022 polls could do it again. These continued misjudgments can undermine public faith in how the media covers elections. Worse still, they can affect the result of close races. Many 2020...
ELECTIONS・9 DAYS AGO