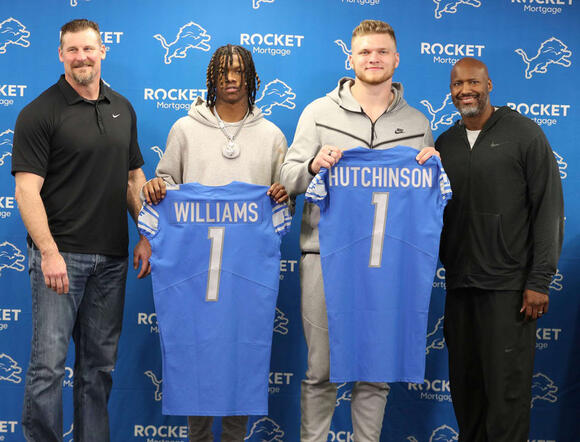 ESPN NFL analyst Mina Kimes has been impressed with the moves made this offseason by the Detroit Lions.

The Honolulu Blue Kool-Aid has been flowing since the Detroit Lions last took the football field.

Many national pundits and analysts have praised the Lions' efforts to rebuild their roster.

PFF recently gave the Lions an A- grade for the entire moves they have made this past offseason.

With a clear goal of adding players who fit the new culture being instilled, general manager Brad Holmes and head coach Dan Campbell have targeted high character players who also have the potential to become strong locker room leaders in the next few seasons.

"I couldn’t ask for more as a head coach than what Brad has done, last year and this year," Campbell said. "We share the same vision. We said that from day one. But we’ve always said we’re going to get the type of guys that match what we’re about, and that is a gritty group of guys that love ball. And by the way, they’re explosive athletes. I think when you get that combination of those types of players -- we were talking last night, we are trying to avoid floaters. We don’t want to draft floaters."

Add ESPN's Mina Kimes to the list of those who believe the Lions have been successfully building their roster the last two years.

"Everything they've done, think about it, over the last two offseasons has made this team an incredibly attractive landing place for either a disgruntled quarterback, a veteran, as we've seen a lot of movement in that area over the last couple of years, or a perfect spot for a rookie," Kimes explained on ESPN's NFL Live.

Kimes added, "My only concern with this team going forward is what if they win too many games this year? That puts them out of reach for one of the top top rookies. I will say, they have got that extra first. I would suspect they'd be willing to do whatever it takes to get in position to grab one."

How to Watch Lions vs. Seahawks: Time, Channel, Streaming Options

Here is how you can watch the Detroit Lions' take on the Seattle Seahawks' in Week 4.
DETROIT, MI・3 HOURS AGO
AllLions

Browns star Garrett not playing vs Falcons after car wreck

Browns All-Pro defensive end Myles Garrett will not play in Sunday's game at Atlanta after he suffered multiple injuries when he crashed his car while speeding earlier in the week
CLEVELAND, OH・23 MINUTES AGO
Sports Illustrated

Will Levis Remains In Game After Gruesome Finger Injury

Kentucky had its hands full against Ole Miss on Saturday and now Wildcats quarterback Will Levis may be dealing with a gruesome injury. ESPN cameras caught the middle finger on Levis' left, non-throwing hand bent well out of shape and going in the wrong direction. The injury came moments after ...
LEXINGTON, KY・25 MINUTES AGO
Wildcats Today

Kentucky has gifted Ole Miss seven points worth of mistakes through 30 minutes of football. A missed field goal, safety and two botched extra points are the reasons why the Rebels find themselves ahead 19-12 at the break.  Will Levis' Finger That was a nasty look at Levis' finger on this ...
LEXINGTON, KY・24 MINUTES AGO
AllLions

Read more on the odds the Detroit Lions have to beat the Seattle Seahawks in Week 4.
DETROIT, MI・5 HOURS AGO
AllLions

'Things Happen in This Game': Dan Campbell on Early Injuries

Head coach Dan Campbell comments on the rash of injuries the team has suffered to start the season.
DETROIT, MI・6 HOURS AGO

Aidan Hutchinson: 'I Can't Be Mad at Myself'

Detroit Lions' Aidan Hutchinson believes he had a good game against the Minnesota Vikings.
DETROIT, MI・1 DAY AGO