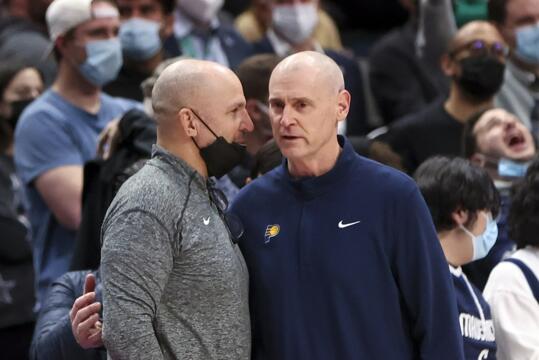 DALLAS (105.3 The Fan) - It was a strange week around the metroplex when Rick Carlisle resigned from his position as the head coach of the Mavericks only to be named the head coach of the Pacers one week later. That stunning development occurred less than 24 hours after Donnie Nelson was outed as the team's general manager.

Mavs owner Mark Cuban could have prevented Carlisle from going to Indiana or forced the Pacers to trade for the head coach, as Carlisle was still under contract. But Cuban did Carlisle a favor and let him out of his deal that was set to expire in two years, only for Carlisle to return the favor by endorsing Jason Kidd to be the next head coach of the Mavericks.

Fast forward several months, and the Mavs are heading to the Western Conference Finals for the first time since Carlisle led the organization there in 2011.

When Carlisle endorsed Kidd as the next head coach of the Mavs, he believed the pairing between Kidd and superstar Luka Doncic was about as mutually beneficial as it could get, and after seeing what he's seen in the regular season and the playoffs out of this Mavericks squad, he knows they have the right person leading the organization.

"This situation made perfect sense. Him [Kidd] coming back to the Mavericks' family. [There] are so many similarities between Jason Kidd's game as one of the all-time great players on the floor and Luka's game. So you knew they would be able to relate at a very high level. J-Kidd is great. He's a no-nonsense, pulls no punches, guy, that's into one thing, and that's winning. He was always the guy that would do anything to win."

The Mavs turnaround under Kidd isn't solely related to his ability to connect with Doncic as a floor general, but he certainly has earned credit for the way the team has bought into his and new assistant Sean Sweeney's defensive system.

"Jason was able to bring an attitude that was needed. I do think the peripheral moves have helped [Bullock, etc.]. And look, they didn't get off to a great start. Things were shaky early … Luka was banged up … It's a long season … Jason knew that. If I know him, Jason stayed very consistent with his messaging," Carlisle said. "It's been great to see. And I'm really happy for him. What he did for us, what he did for me and my career playing with us here in Dallas, was something I could never repay. And I'm happy for his success and I wish them success going forward."

In the eight-player Houston Rockets trade made Thursday night, the team acquired some players who could be around during the season.
HOUSTON, TX・22 MINUTES AGO
KIRO 7 Seattle

SEATTLE — An NBA preseason game may not seem like a benchmark moment, even in a basketball-hungry city like Seattle, but Jamal Crawford believes there’s value even in an exhibition. “It reignites a whole new generation of kids who need to see this,” said Crawford, a Seattle native...
SEATTLE, WA・25 MINUTES AGO