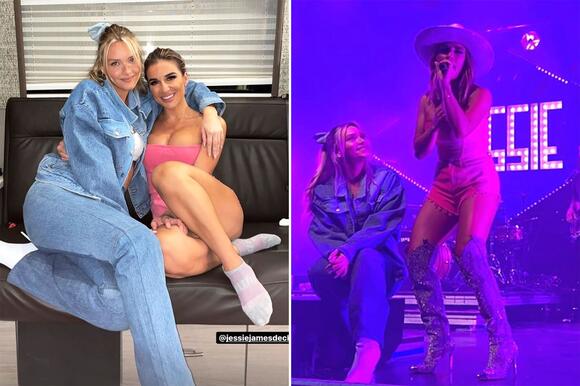 The NFL star’s girlfriend Camille Kostek filled in for Jessie James Decker’s husband, Eric, on Sunday night at the singer’s show at the House of Blues in Boston.

Kostek took to the stage to stand in for Decker while his wife performed “All Filled Up” — a song she usually serenades the former NFL receiver with during her shows.

“Jessie usually sings this song to Eric on stage, but he wasn’t at this show so she had me fill in and I had no clue this was going to happen,” Kostek wrote on her Instagram story. “What a rush!!! Boston I LOVE YOU!!!”

Kostek has a soft spot for Boston fans. She spent years bonding with them in New England when Gronkowski played for the Patriots.

The pair danced and sang together on stage while the crowd cheered them on. Kostek shared a bunch of fan-captured videos to her Instagram story and called the country singer “a rockstar.”

One clip showed Kostek exiting the stage, but not before she gave Jessie “a proud little butt spank at the end.”

Kostek joined Decker’s pre-show prayer circle with her band and crew, and stuck around after the show to send her off to her next tour location.

“Tucking her in on the bus before she’s off to D.C.,” the “Wipe Out” host wrote over a photo that showed the pair hugging on Jessie’s tour bus.

The Sports Illustrated swimsuit model and Decker have been friends for years, and sometimes vacation together with their significant others. Kostek was also on hand to support the singer at the grand opening of her Kittenish clothing boutique in Tampa Bay in November.

Eric Decker — who was a third-round pick in the 2010 NFL Draft — spent four seasons with the Broncos, before a three-season stint with the Jets. He later had short stops in Tennessee and New England before announcing his retirement in August 2018.

The Celtics employee with whom Ime Udoka had an affair helped make all his travel arrangements ... and that job sometimes included organizing travel for his fiancee, Nia Long. Sources connected to the couple and the NBA franchise tell TMZ ... one of the staffer's duties included planning Udoka's team-related travel, and we're told she was also involved in booking travel for Nia to come to Boston or to road games.
BOSTON, MA・2 DAYS AGO
RadarOnline

Ime Udoka and his mistress were allegedly caught in their affair by nothing more than an average home security feature. "Multiple sources confirm, #Celtics female staffer’s affair w/ Celtics Coach #ImeUdoka was uncovered by her husband when he overheard a private conversation on a home doorbell camera," sports reporter Kevin Frazier wrote via Twitter on Saturday, September 24.The Celtics coach was suspended for a year from the high profile job after breaking several NBA rules by cheating on his current partner, Nia Long, with a woman on the team's staff.Long, who had recently moved to Boston to go on a...
BOSTON, MA・1 DAY AGO