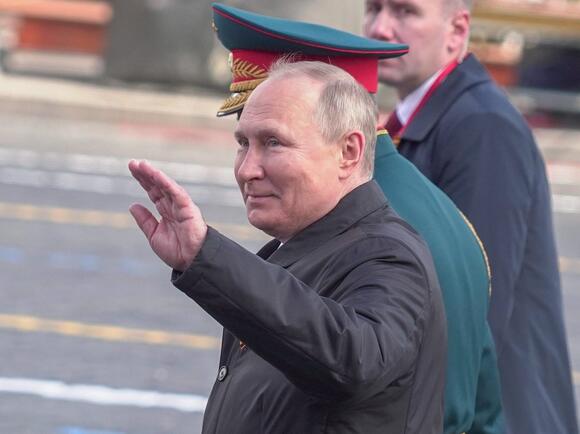 The former British spy who wrote an infamous dossier about Donald Trump's dealings in Russia told Sky News on Sunday that sources had told him that Russian President Vladimir Putin is seriously ill.

Christopher Steele, who led MI6's Russia desk and worked as a spy in Moscow for years, told Sky News: "Certainly, from what we're hearing from sources in Russia and elsewhere, is that Putin is, in fact, quite seriously ill."

Claims about the 69-year-old leader's health have circulated for months. On Saturday, Ukraine's head of military intelligence, Maj. Gen. Kyrylo Budanov, told Sky that Putin is in a "very bad psychological and physical condition and he is very sick."

Budanov went on to suggest that the purported illness had incited plans within Russia for a coup .

In his interview with Sky, Steele suggested that Putin's health is "an element" of his decision-making in Ukraine.

"It's not clear exactly what this illness is — whether it's incurable or terminal, or whatever," he said. "But certainly, I think it's part of the equation."

On Thursday, New Lines Magazine said it had obtained a recording of a Russian oligarch saying Putin is " very ill with blood cancer ." New Lines said it verified the oligarch's identity but was unable to authenticate the claims in the recording.

It is all but impossible to confirm rumors about Putin's health, which describe a panoply of ailments. The Russian investigative news outlet Proekt said in early April that the leader had received dozens of visits from a thyroid-cancer specialist .

In early May, a former KGB agent, Boris Karpichkov, told The Sun , without citing sources, that "there is a serious concern that Putin is suffering from" ailments including dementia and Parkinson's disease.

The Sun's report followed weeks of tabloid speculation over the leader's appearance, including images of him appearing to steady himself while seated in a meeting with his defense minister.

Steele is the author of an intelligence dossier that made multiple claims about Trump, including that there exists a so-called pee tape of obscene material involving Trump in Russia before his political career.

No evidence of the tape has been found, and other aspects of the dossier's credibility have been questioned, CNN reported .

Steele worked under diplomatic cover as a spy in Moscow for three years in the '90s, and he was the chief of MI6's Russia desk from 2006 to 2009.

Steele has lost all credibility. I wouldn't trust his word if he claimed water was wet or the sky was blue on the sunniest, most pleasant day of the year.

Putin poisoned by his inner circle..things can't keep going on like this and Putin listens to nobody...Russia will pull out after he dies

Who would trust Steele for any truthful info? Zero credibility. Remember Folks, whatever MSM spits out, think the complete opposite and you'll be just fine.

Igor Krasnov told Putin there were "more than 9,000 citizens who were illegally mobilized" when Russia sent conscripts into Ukraine late last year.
14 HOURS AGO
Business Insider

McKay Coppins, a journalist at The Atlantic, said he was "taken aback" by how often he heard MAGA Republicans say they wish Trump was dead.
MICHIGAN STATE・22 HOURS AGO
Business Insider

A captured member of the infamous Wagner Group said he is more 'afraid of Putin' than dying in battle, Ukrainian soldier reveals

"We're afraid of Putin," the Ukrainian soldier revealed the man said when answering whether he was afraid to fight for freedom in Russia.
5 HOURS AGO
Business Insider

Graham said on Saturday that there are "many, many talented people" in the GOP, but there is "only one Donald Trump."
SOUTH CAROLINA STATE・2 DAYS AGO
Business Insider

This help line is a growing effort to give Ukraine vital advice on repairs and maintenance as it pushes weapons to their limits.
WASHINGTON STATE・2 DAYS AGO
The Hill

There has been substantial media coverage of President Biden and former Vice President Pence both removing marked classified documents outside the White House after they left the vice presidency (and, in the case of Biden, also including after he was a U.S. senator). Both insist they did so inadvertently.   Of course, the word “inadvertent” does not apply to former President Trump’s behavior. As we now know from Mr. Trump’s own admission, he knew documents he took to Mar-a-Lago were classified…
WASHINGTON STATE・2 DAYS AGO
Business Insider

The president of EU and NATO country Croatia has taken a wildly different stance to its allies regarding Russia's invasion of Ukraine.
1 DAY AGO
Business Insider

Moscow's 1st Guards Tank Army was beaten down in the initial phase of the war and was routed months later during a Ukrainian counteroffensive.
7 HOURS AGO
Business Insider

"They brought two prisoners who refused to go fight and they shot them in front of everyone," he told CNN.
1 DAY AGO
Business Insider

Trump does have multiple lawyers representing him in at least a dozen cases, though it is unclear if he has more attorneys than Capone.
GEORGIA STATE・1 DAY AGO
Business Insider

Ukraine official gloats after drone strike on weapons facility in Russian-allied Iran: 'Ukraine did warn you'

Mykhailo Polodyak, a senior aide to President Volodymyr Zelenskyy, made the comment after multiple reports of a drone strike on a building in Isfahan.
2 DAYS AGO
Business Insider

Worried about World War III, Trump says he wants an 'impenetrable' shield like Iron Dome to protect the US from hypersonic weapons. A missile defense expert says it's a long shot.

Whether that's Iron Dome, something similar, or something else entirely, nothing is going to be "impenetrable," a missile defense expert said.
1 DAY AGO
Newsweek

"There is no other way to talk to these fools," State Duma member and former military commander Andrey Gurulyov said.
2 DAYS AGO
Business Insider

As Ukraine war drags on, Russian lawmakers told to compare it to the bloody (but ultimately victorious) WWII Battle of Stalingrad

A pro-Kremlin party told members to compare the conflict in Ukraine to the Battle of Stalingrad, which cost the lives of 2 million in World War II.
12 HOURS AGO
Business Insider

The US's powerful Abrams tanks are heading to Ukraine, but generals disagree over how hard it'll be to use them on the battlefield

The US has pledged to send Abrams tanks to Ukraine, joining a bevy of Western-made tanks. The Abrams is a powerful and highly capable tank, but it's also seen as challenging to operate. Experts disagree about how easily Ukraine will be able to wield that diverse tank force. Ukraine is...
11 HOURS AGO
Business Insider

The good news for the former president is that, for now, the rest of the 2024 GOP field remains frozen.
IOWA STATE・1 DAY AGO