CHICAGO (WLS) -- There are six candidates running to be the next Illinois secretary of state.

Two of the Democratic candidates are next up: former Illinois Treasurer Alexi Giannoulias and Chicago Alderman David Moore.

WATCH: Ald. David Moore is running for secretary of state 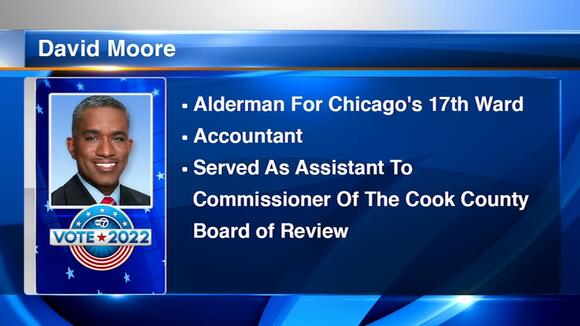 Moore currently represents the city's 17th Ward. He's an accountant who's worked in both the private and public sector. And he served as an assistant to the commissioner of the Cook County Board of Review. He said it's important that "this seat remains a servant's seat and not go back to being a political seat." And Moore said he's the only one in the race who has committed to not use the secretary of state's seat as a stepping stone for higher office.

"I want to bring my 10 years of experience working for Fortune 500 companies to make sure that we run an effective, efficient and cost-saving operation," he said.

Alexi Giannoulias is the former Illinois state treasurer. And in 2010, he was the Democratic nominee for the U.S. Senate seat. Giannoulias is also the founder and CEO of Annoula Ventures.

WATCH: Alexi Giannoulias is running for secretary of state 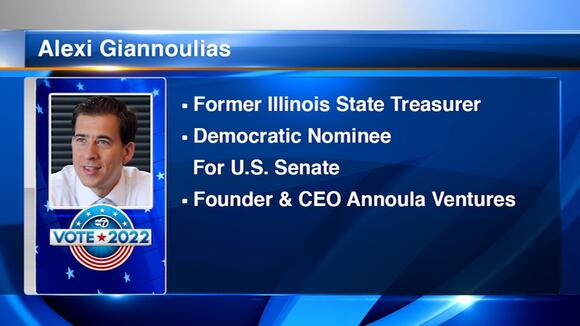 He called this "an incredibly important race."

As for his priorities, "I'm committed to advancing initiatives that will protect voter rights, make it easier to vote and expand registration opportunities for every single person that wants to participate in the process. In addition, I want to modernize the office and bring in vastly new technology to help repeal the time tax, with the amount of time that unfortunately far too many people are wasting in line or filling out forms. So my Skip the Line Program will significantly reduce wait times at secretary of state facilities across the state."

No more Democrats! Cleansing up time! They did not bring anything good in any government position for a long time. It's time to wake up, Illinois!!!!

City leaders said state officials gave them the heads up that the migrants would be coming.
DES PLAINES, IL・1 DAY AGO
ABC 7 Chicago

"This is the worst stain, in my opinion, on the Chicago Police Department and the City of Chicago," said Josh Tepfler, an attorney for the Exoneration Project.
CHICAGO, IL・1 DAY AGO

"The racial gap, as far as disparity of wealth is just truly unbelievable, and I feel that for me as treasurer of Chicago, my role is to help break that gap," she said.
CHICAGO, IL・3 DAYS AGO
ABC 7 Chicago

A powerful figure in the Chicago labor movement was recognized on the city's Near West Side Friday afternoon.
CHICAGO, IL・3 DAYS AGO
ABC 7 Chicago

Two women and a man were killed in a crash on the Indiana Toll Road.
YOUNGSTOWN, OH・10 HOURS AGO
ABC 7 Chicago

So far, more than 200 convictions tied to Ronald Watts have been dismissed, since one of his team members went to prison for corruption.
CHICAGO, IL・2 DAYS AGO

"The defendant looked around once more and with no one in the immediate area, she herself climbed over the chain, crouched behind the 3-year-old, straddled him and with both hands pushed him off the platform, dropping 6.5 feet into Lake Michigan," Asst. State's Attorney Anne McCord Rodgers said.
CHICAGO, IL・1 HOUR AGO
ABC 7 Chicago

The new Inflation Reduction Act could help you get relief from rising electric and gas bills while also helping the environment.
ILLINOIS STATE・19 HOURS AGO
ABC 7 Chicago

Chicago tourism and business travel up, voted Best Big City in the U.S.

"We really have felt the energy coming back."
CHICAGO, IL・6 HOURS AGO
ABC 7 Chicago

Ex-Illinois Youth Center guard sentenced for encouraging detainees to intimidate, attack each other

The ex-IYC guard stood by and did nothing during the attacks he encouraged, the Kane County State's Attorney's Office said.
1 DAY AGO

"It's going to be terrible for the victims and the witnesses," a former DA said.
WAUKESHA, WI・12 HOURS AGO
ABC 7 Chicago

Chicago natives pick up the pieces after Hurricane Ian's destruction

Chicago area natives are recovering after Hurricane Ian made landfall in Florida and then the Carolinas this week.
CHICAGO, IL・3 DAYS AGO

Despite attempts to crackdown, drag racing continues to be an issue at Big Marsh Park on the city's South Side.
CHICAGO, IL・3 DAYS AGO
ABC 7 Chicago

A new event happening this month is all about stopping the violence in Chicago and dancing for a great cause.
CHICAGO, IL・2 DAYS AGO
ABC 7 Chicago

The I-Team uncovers thousands of complaints about traffic lights burned out or broken across Chicago, Thursday at 10 p.m. on Eyewitness News.
CHICAGO, IL・7 HOURS AGO
ABC 7 Chicago

Chicagoland animal groups are pitching in to help dogs impacted in Florida by Hurricane Ian.
CHICAGO, IL・2 DAYS AGO