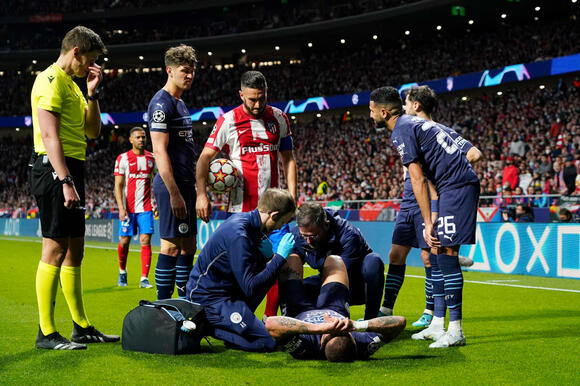 Manchester City and England full-back, Kyle Walker has revealed in a recent interview that he may still play again this season, despite Pep Guardiola recently claiming that his campaign was over due to injury.

The 31-year-old has enjoyed another stellar season at the Etihad Stadium, winning fans over with his remarkable recovery pace and defensive instincts.

Even the sight of him limping off injured against Real Madrid in the Champions League semi-final second-leg was enough to terrify the blue half of Manchester.

Carlo Ancelotti's side - who ultimately won the tie 6-5 on aggregate - didn't score any of their goals while Kyle Walker was on the pitch. He was initially injured against another Madrid side, when Manchester City faced Atletico in the quarter-final stage, and had been fighting for fitness ever since.

Recently, Manchester City manager Pep Guardiola went as far as to say that all of Kyle Walker, John Stones, and Ruben Dias would be unable to play again this season due to their respective injuries - plunging his defence into a crisis that has threatened to sabotage their title charge.

Of course, Kyle Walker has more than just Manchester City matches to get fit for in the coming days and weeks.

England have four UEFA Nations League matches in the first half of June, with the Three Lions facing Hungary on two occasions, Germany, and Italy as they kick off their bid to reach the finals next summer.

Walker is one of the few players of the Pep Guardiola era to make over 200 appearances for Manchester City, scoring six times for the club so far.

Watch: Erling Haaland Scores Yet Again To Break The Deadlock Against FC Copenhagen

Erling Haaland has got yet another goal to his name as he scored the first against FC Copenhagen in the Champions League.
UEFA・5 HOURS AGO
City Transfer Room

Erling Haaland has given his thoughts on Manchester City's 6-3 win over Manchester United in the Manchester Derby.
PREMIER LEAGUE・2 DAYS AGO
City Transfer Room

Manchester City manager Pep Guardiola has confirmed Kyle Walker will be unavailable for his side's Champions League clash with FC Copenhagen due to injury and has provided an update on Rodri's fitness.
FIFA・1 DAY AGO
City Transfer Room

Manchester City left-back Sergio Gomez has said that he sees being coached by Pep Guardiola as a 'dream'.
PREMIER LEAGUE・1 DAY AGO