Moon goes blood red this weekend: 'Eclipse for the Americas' 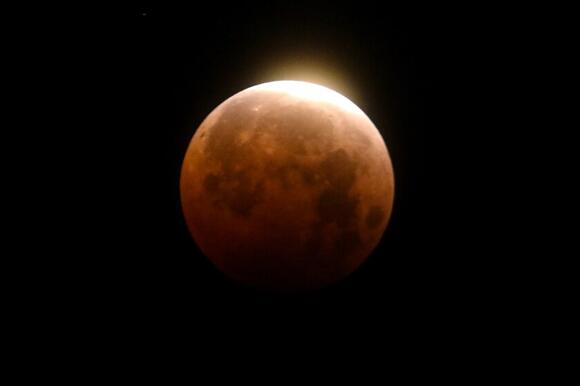 A total lunar eclipse will grace the night skies this weekend, providing longer than usual thrills for stargazers across North and South America.

The celestial action unfolds Sunday night into early Monday, with the moon bathed in the reflected red and orange hues of Earth’s sunsets and sunrises for about 1½ hours, one of the longest totalities of the decade. It will be the first so-called blood moon in a year.

Observers in the eastern half of North America and all of Central and South America will have prime seats for the whole show, weather permitting. Partial stages of the eclipse will be visible across Africa, Europe and the Middle East.

Left out: Alaska, Asia and Australia.

“This is really an eclipse for the Americas,” said NASA's Noah Petro , a planetary geologist who specializes in the moon. “It's going to be a treat.”

All you need, he noted, are “patience and eyeballs.”

A total eclipse occurs when Earth passes directly between the moon and the sun, and casts a shadow on our constant, cosmic companion. The moon will be 225,000 miles away at the peak of the eclipse — around midnight on the U.S. East Coast.

“This is this gradual, slow, wonderful event that as long as it’s clear where you are, you get to see it,” Petro said.

If not, NASA will provide a livestream of the eclipse from various locations; so will the Slooh network of observatories .

There will be another lengthy total lunar eclipse in November, with Africa and Europe lucking out again, but not the Americas. Then the next one isn’t until 2025.

This planet belongs to GOD not us. Time is infinite and it will be here for billions of year of more creations even after we wipe ourselves out!

As well it should --- REPRESENTING INNOCENT UKRAINIAN BLOOD ! While "we" go about our day to day lives -- 5000 miles away --- there reigns unimaginable horror --- bombs bullets artillery (things-that-hurt) cutting indiscriminately thru the tiniest baby to the very old ■ all the while ■ humanity watches from the safety of the sidelines ■ UKRAINE CRIES OUT FOR HELP -- I-pray-Gods-listening

This super flower blood moon coming tonight will be one of the earliest, brightest, and most profound this century. This lunar event will happen tonight between moonrise and moonset. People worldwide will be able to spectate such a natural wonder from anywhere on Earth, with the best seats in the house in America and West Africa.
7 DAYS AGO
Salon

A plethora of downright bizarre scientific research from the Department of Defense previously kept under wraps has been uncovered, revealing an array of peculiar schemes proposed by the United States military. One outlandish proposal suggested detonating nuclear bombs on the moon to create a tunnel through it. Millions in taxpayer dollars were spent on the research, which appears to have relied on a contractor, Bigelow Aerospace Advanced Studies, which was owned by multi-millionaire Robert Bigelow, a hotel impresario. The public was kept in the dark until now regarding what research was being funded.
ASTRONOMY・26 DAYS AGO
ScienceAlert

There are water molecules and ice up on the Moon, so how did they get there? Asteroid and comet collisions are likely to have produced some of it, but a new study suggests another source of lunar water: the Earth's atmosphere. Hydrogen and oxygen ions escaping from our planet's upper atmosphere and then combining on the Moon could have created as much as 3,500 cubic kilometers (840 cubic miles) of surface permafrost or subsurface liquid water, scientists say. The thinking is that hydrogen and oxygen ions are driven into the lunar surface as the Moon passes through the tail of the Earth's...
ASTRONOMY・19 DAYS AGO
The Independent

A top US official in the Pacific has warned that America would have to “respond” if the Solomon Islands allows China to establish a military base there.Following a “constructive and candid” 90-minute meeting with prime minister Manasseh Sogavare, ambassador Daniel Kritenbrink said that the security deals between China and the Solomon Islands present “potential regional security implications” for the US and other allies.“We wanted to outline for our friends in the Solomons what our concerns are,” Mr Kritenbrink, US assistant secretary for East Asian and Pacific Affairs, told reporters.“We have respect for the Solomon Islands’ sovereignty. But we also...
FOREIGN POLICY・27 DAYS AGO

The exponential increase in saltwater crocodile populations in the Northern Territory in recent decades may be partly a result of them preying on feral pigs, new research suggests. Scientists who have analysed the diets of saltwater crocodiles in the Territory believe the reptiles have shifted from marine prey to predominantly...
ANIMALS・26 DAYS AGO
Newsweek

Troy Staggs found himself in a 47-minute long battle with the huge fish, which measured 4.6 feet and weighed around 55 pounds.
MISSOURI STATE・27 DAYS AGO
Business Insider

The former F-35 test pilot Billie Flynn told The Aviationist that moving to the "cosmic spaceship" that is the F-35 was too much to ask of MiG pilots.
AEROSPACE & DEFENSE・27 DAYS AGO
Aabha Gopan

Meet Kefir, the giant Maine Coon cat who is an internet sensation

Kefir is a Maine Coon cat from Russia who took the internet by storm with his huge size. This adorable cat is a few months over two years old and hasn’t reached his maximum size yet, as Maine Coons usually grow till they are three years old.
4 DAYS AGO

Why does the moon turn red during a total lunar eclipse?

When a lunar eclipse occurs and our lone satellite inches into Earth's shadow, the moon's face becomes painted red. Though this red hue is most striking during a total lunar eclipse, the moon gets cast in a scarlet light even during partial lunar eclipses. So why does our moon turn red and not black when bathed in Earth's shadow?
ASTRONOMY・9 DAYS AGO
Digital Trends

This week’s lunar eclipse wasn’t only observed from the ground and from the International Space Station — it was also observed from 64 million miles (100 million kilometers) away from Earth by the Lucy spacecraft. Lucy, which is an uncrewed craft from NASA and the Southwest Research Institute on its way to study the Trojan asteroids in the orbit of Jupiter, got a view of the lunar eclipse on May 15 and was able to snap images over a period of three hours which have been turned into a time-lapse video:
ASTRONOMY・2 DAYS AGO
The Independent

The largest meteor shower of 2022 so far is set to peak on Thursday and Friday, offering skygazers the best chance of the year to view shooting stars.Up to 50 meteors an hour will be visible around the world, weather permitting, with the best views of the celestial spectacle occurring just before dawn.The Eta Aquarids take place when the Earth passes through the tail of Halley’s Comet, which passes Earth every 76 years.The ‘shooting stars’ that appear are when dust, stones and other debris from the comet’s tail burn up in the Earth’s atmosphere.“Fast meteors can leave glowing ‘trains’...
ASTRONOMY・18 DAYS AGO
Newsweek

The asteroid is scheduled to make its close approach on May 27, when it will come within around 2.5 million miles of the Earth.
ASTRONOMY・4 DAYS AGO

May 31st Could Be the Most Powerful Meteor Storm in Generations, or Nothing at All

Be sure to watch the skies on the last morning of May, for a possible Tau Herculid meteor outburst. If predictions hold true, we may be in for a rare meteor outburst from an obscure meteor shower on May 31st topping a thousand meteors per hour… or we may see nothing at all. Welcome to the wonderful world of meteor shower predictions and prognostications.
ASTRONOMY・3 DAYS AGO
Elite Daily

Eclipse season is here, and it’s ready to take charge. Lunar eclipses, in particular, tend to disrupt your world a bit more than solar eclipses do, so while the solar eclipse in Taurus that took place on April 30 may not have brought forth too much uncomfortable change, the “Super Flower Blood Moon” total lunar eclipse in Scorpio on May 15, 2022 will definitely be a time of transformation for every zodiac sign, especially Taurus, Leo, Scorpio, and Aquarius.
ASTRONOMY・10 DAYS AGO
Space.com

Total eclipses of the moon are the most colorful of all astronomical phenomena. Each lunar eclipse is unique, with its brightness and coloration determined by a range of factors, such as the geometry of the eclipse and the large-scale meteorological conditions on Earth. When the moon is entering, and later emerging from, Earth's shadow, secondary phenomena may be overlooked.
ASTRONOMY・9 DAYS AGO
Interesting Engineering

The Mars Perseverance rover is nearing its main mission target

NASA's Perseverance rover will begin its climb up the ancient delta feature known as "Hawksbill Gap" on Mars today, May 17, according to a post from NASA. This is the Perseverance team's "main astrobiology target" and a key milestone for a mission that set out to find signs of ancient life on the red planet.
AEROSPACE & DEFENSE・5 DAYS AGO

Moon volcanoes may have spewed 18 quadrillion pounds of volcanic water

The Moon's violent volcanic past may provide a vital lifeline for astronauts on future missions. Those characteristic dark splotches on the Moon, also known as lunar maria, originated billions of years ago when a series of volcanic eruptions took place on the lunar surface. Now, a new paper from researchers...
ASTRONOMY・5 DAYS AGO
marthastewart.com

The first lunar eclipse of the year is slated for April 30, but a second one will follow not too long after. Some time between the late evening of May 15 and early morning of May 16 a full flower moon will enter Earth's shadow and cause a total lunar eclipse. Space.com reports that sky gazers can spot the celestial event from areas around the world, including in most of the Americas and Antartica, as well as the western reaches of Europe and Africa, and the eastern side of the Pacific.
ASTRONOMY・18 DAYS AGO
Entrepreneur

This is an important segment of the population with purchasing power that is practically ignored by advertising campaigns.
ECONOMY・26 DAYS AGO
KHON2

On May 15, the total lunar eclipse will be visible from Hawaii at night, but it won't be quite the cosmic show as last year.
HAWAII STATE・9 DAYS AGO