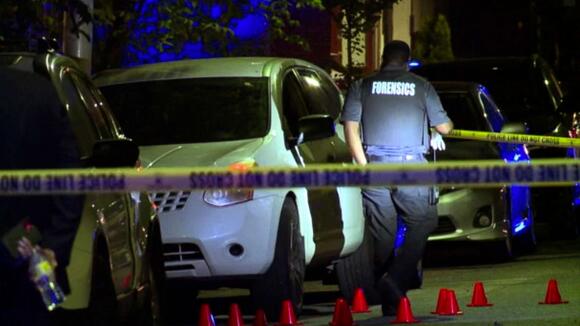 Baltimore police are searching for the gunmen who killed a pregnant woman, leaving her newborn in the hospital in critical condition.

Officers found a man and a 38-year-old pregnant woman shot inside a car at about 8:13 p.m. Thursday, Baltimore police said.

Both victims were taken to Johns Hopkins Hospital where the man was immediately pronounced dead, police said.

The newborn is in critical condition as a result of the emergency delivery, not the shooting, Baltimore Police Commissioner Michael Harrison told reporters.

MORE: Gun homicides spiked 35% during the first year of the pandemic, CDC says

"To be quite honest and frank, I don't really give a s--- what the conflict was," Baltimore Mayor Brandon Scott told reporters. "We cannot have folks shooting at pregnant women in our city."

He added, "We will do everything within our power to find who did this, catch them and hold them accountable."

The baby is not an abortion. It is critical condition. Don't you know how to read. The mother delivered the baby early. My prayers are for the baby now. When are people going to learn that killing someone is not a solution to anything . You took two lives maybe three. An innocent child. Now if they find you, the death penalty should apply for what you did for your action . Prayers for the family

the police and the court system needs to stop cutting deals with these horrible people, I know they say that they cut deals to make sure something sticks but it seems to me that in a lot of cases the murderers have more rights than the victims, God bless that little baby

**AND YES** when you catch them & know they're the ones that killed them, no jail time, immediate execution, that's what they deserve, just like they did to this couple leaving a newborn struggling for it's life & no parents to grow up with. SOB's anyway.

KINGSVILLE, Md.— Twenty seven people suffered minor injuries Sunday after a bus crashed and rolled on I-95 north of Baltimore, according to the Baltimore County Fire Department. The crash occurred near Kingsville, Maryland, shortly before 7 a.m., fire officials said in a statement. The vehicle was operated by megabus...
KINGSVILLE, MD・18 HOURS AGO
foxbaltimore.com

BALTIMORE (WBFF) — Five people were shot overnight in Baltimore City, including a child and teenager. According to police, just before 12:15 a.m., officers were called to the scene of a shot spotter alert in the 1900 block of North Collington Avenue. Once on scene, officers located three victims,...
BALTIMORE, MD・1 DAY AGO
CBS Baltimore

BALTIMORE (WJZ) — It has been two days since a pregnant woman and her fiancé were murdered outside of their home on 23rd Street in East Baltimore on Thursday. Even though she was fatally injured during a barrage of gunfire, 38-year-old Angel Smith, who was seven months pregnant, gave birth to a baby girl before she died. When the baby was born, she was in critical condition. She has remained at Johns Hopkins Hospital. Today, family members are telling WJZ that the baby’s health is improving. Some of the tubes that helped her fight for her life have already been removed, according to...
8 DAYS AGO
NBC Washington

Investigators have charged a Baltimore man in connection to the murder of Keith Johnson, 34, in the Western District, officials say. Anton Harris, 35, is accused of shooting Johnson on the 500 block of North Pulaski Street around 3:08 p.m., Wednesday, May 4, reports the Baltimore Police Department. Investigators were...
BALTIMORE, MD・16 DAYS AGO