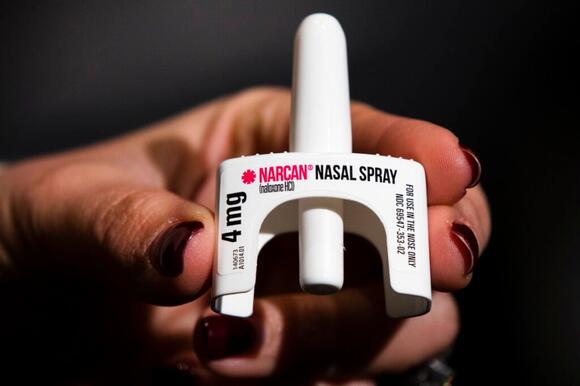 Through an event called “Opioid Community Conversation,” dozens of residents and leaders joined together for a meeting around opioid awareness here in Columbus.

The event was hosted by the African American Male Wellness Agency and touched on several topics including the rising number of opioid overdose deaths in Ohio, especially among the Black community.

“With opiates it’s a process, it’s a road to recovery,” said Christina Goins, a community health manager with CompDrug.

Goins works with CompDrug, an opioid treatment program, and said one of the issues she finds most apparent is the lack of awareness around opioid addiction in the Black community.

“Our rates and our numbers continue to rise, and so it’s important to have these conversations so people are aware, they’re educated,” said Goins.

“It destroys families,” said Lt. Isaac Toliver, with the Columbus Division of Fire.

Toliver supervises the Rapid Response Emergency Addiction and Crisis Teams (RREACT), which responds to non-fatal overdoses in the community, as well as bringing individuals to treatment.

He said it’s through conversations like this that opioid overdoses can be prevented.

“It’s huge, I mean education is key, and then you see the increase in the African American community. So, I know for us over the last year, being out in the community doing different walks, and being involved like this has really opened the doors for us,” said Toliver.

On Monday, the African American Male Wellness Agency plans to hold a virtual meeting, where they’ll be providing Narcan training.

Ohio’s criminal code has grown nearly fivefold since 1980. Some want to change that

COLUMBUS, Ohio (WCMH) – Rep. Jeff LaRe recalled a time he could fit a copy of the Ohio Revised Code (ORC) on his person while patrolling the streets of Fairfield County as a sheriff’s deputy in the 1990s. Today, after hundreds of iterations to the law, “that’d be like carrying around a set of encyclopedias,” […]
3 HOURS AGO
NBC4 Columbus

COLUMBUS, Ohio (WCMH) — Bills pending on state lawmakers’ desks could be emboldening groups targeting LGBTQ+ people, and researchers are using data to back up that claim. Anti-LGBTQ+ incidents — demonstrations, political violence, and offline propaganda activity — more than tripled from 64 events in 2021 to 193 events in 2022 as of mid-November, according […]
2 HOURS AGO
NBC4 Columbus

Meet the new lawmakers coming to the Ohio Statehouse

COLUMBUS, Ohio (WCMH) — In one month, there will be new legislators at the Ohio Statehouse. Two of those new faces include Senator-elect Bill DeMora (D-Northeast Ohio) and Representative-elect Dr. Anita Somani (D-Franklin County), who said they are ready to hit the ground running in January. “We have to work as a team,” Somani said. […]
15 HOURS AGO
NBC4 Columbus

COLUMBUS, Ohio (WCMH) — Several Ohio cities received a perfect score by a national report grading municipalities across the nation for equality, despite a barrage of anti-LGBTQ+ bills introduced in the state’s legislature. The Human Right’s Campaign Municipal Equality Index for 2022 examined the inclusivity of local laws, policies and services for LGBTQ+ residents. More […]
20 HOURS AGO
NBC4 Columbus

COLUMBUS, Ohio (WCMH) — There are now 56 confirmed cases of measles in Columbus and central Ohio — including in two partially vaccinated children. As of Monday afternoon, Columbus Public Health confirmed there are 56 cases in its measles outbreak dashboard, up from 50 reported Friday. The continued spread comes after last week’s announcements that […]
18 HOURS AGO
NBC4 Columbus

COLUMBUS, Ohio (WCMH) — A chance encounter between two little boys both being treated at Nationwide Children’s Hospital has blossomed into a friendship.  This story of this chance encounter starts back in October of 2022. Brady Martin, a 10-year-old from Canal Winchester was wrapping up a chemotherapy appointment when his family met a little boy […]
2 HOURS AGO
NBC4 Columbus

COLUMBUS, Ohio (WCMH) — Instead of patients, you’ll find presents loaded onto ambulances from the Columbus Division of Fire for the 45th annual Firefighters 4 Kids Toy Drive. “We’re collecting every day, from now through Christmas, at any Franklin County fire station, and we pick up from those stations basically every day,” said Mike Mullins, […]
16 HOURS AGO
NBC4 Columbus

COLUMBUS, Ohio (WCMH) – A Columbus Division of Police officer was caught on tape this past weekend high-fiving a member of a white supremacist group, drawing a response from the department’s chief. The incident took place Saturday morning outside a Clintonville church where a scheduled drag story time event had to be canceled due to […]
10 HOURS AGO
NBC4 Columbus

WESTERVILLE, Ohio (WCMH) — A fourth public location in central Ohio has been listed by Columbus Public Health as being exposed to measles. CPH announced Saturday afternoon that they are investigating a confirmed case of measles that visited the Dollar Tree store on 5990 Westerville Road on the northeast side of central Ohio. Health officials […]
2 DAYS AGO
NBC4 Columbus

COLUMBUS, Ohio (WCMH) — The Columbus Division of Police hosted its second annual “Cram A Cruiser” event, a toy giveaway for children and families of homicide victims. This year, CPD gave toys away to more than 70 families affected by a violent tragedy. Each kid got to choose a toy from the police cruisers packed […]
2 DAYS AGO
NBC4 Columbus

Most popular baby names for boys in Ohio

Stacker compiled a list of the most popular baby names for boys in Ohio using data from the Social Security Administration. Names are ranked by the number of babies born in Ohio in 2021. Liam has been the most popular boy name in the United States for the last five years, while Noah, Oliver, Elijah, and James […]
3 DAYS AGO
NBC4 Columbus

Woman’s mission to help heal the heartbreak of a miscarriage

COLUMBUS, Ohio (WCMH) — One in four women will lose a child to a miscarriage, a heartbreaking statistic. Karen Morris had the biggest loss of her life nearly two decades ago, losing her son Nicholas after he didn’t survive surgery for a heart defect after birth. Eight years after losing Nicholas and giving birth to […]
16 HOURS AGO
NBC4 Columbus

Frozen raspberries recalled over Hepatitis A

More than 1,000 cases of frozen raspberries are being recalled after testing indicated the presence of Hepatitis A.
1 DAY AGO
NBC4 Columbus

For people living with Alzheimer’s Disease, or those caring for a loved one affected, time during the holidays is precious. It’s why Senior Star at Dublin Retirement Village always makes a big to-do with its Holiday Open House, both to celebrate the season, and to raise vital dollars for research.
10 HOURS AGO
NBC4 Columbus

COLUMBUS, Ohio (WCMH) — This week on The Spectrum: The U.S. Senate passes a bill that would codify same-sex and interracial marriage. “I’m happy that they’re doing something,” said gay rights advocate Jim Obergefell. “I’m sad that it has to happen.” Why the Ohioan whose Supreme Court case brought about marriage equality said concerns the […]
1 DAY AGO
NBC4 Columbus

The announcement was made Monday.
52 MINUTES AGO