The Enquirer sits down with Wes Miller as he prepares for season No. 2 at Cincinnati A year ago, Wes Miller admitted he was in an "absolute whirlwind," feeling as though he was figuratively trying to drink water out of a overpowering fire hose.

Everything was coming at him quickly.

A year later, Miller, who is entering his second season as University of Cincinnati men's basketball coach, is taking his sips a bit more comfortably.

Next steps for Cincinnati Bearcats: 'Right now, it's trying to decompress from the year'

"I hate the word comfortable," MIller told The Enquirer on Thursday. "I think the minute that we feel comfortable, we're in trouble, because then you're not really pushing the envelope to get better. So, we still feel uncomfortable, and I mean that in real healthy, positive way. We're going to try to make sure we're uncomfortable every day with a crazy sense of urgency to improve.

"But in the last seven to 10 days, it's been the first time since we arrived in Cincinnati that we can kind of take a deep breath, really process and really plan and prepare the way that we need to for this upcoming summer and season.

"That's been a good feeling."

Following UC basketball?: Download our app for the latest news

In an in-depth conversation with The Enquirer, Miller spoke about his up-and-down debut season at the helm of the Bearcats program, his past few weeks on the recruiting trail, the departure of top reserve guard Mike Saunders Jr., and what fans can expect from a new-look Cincinnati team during the 2022-23 season. 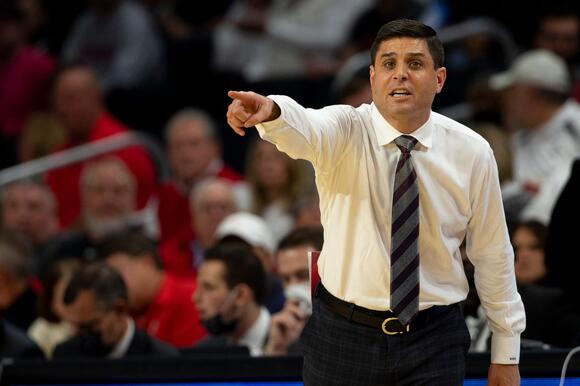 After leading Cincinnati to an 18-15 (7-11 AAC) record last season and having his team's campaign halted by top-seeded Houston on the second day of the American Athletic Conference tournament, Miller reloaded, quickly.

Miller will pair those commitments with the arrivals of incoming freshman and four-star recruit Daniel Skillings and three-star newcomers Josh Reed and Sage Tolentino to form a team he hopes will string together more wins than last season's squad. 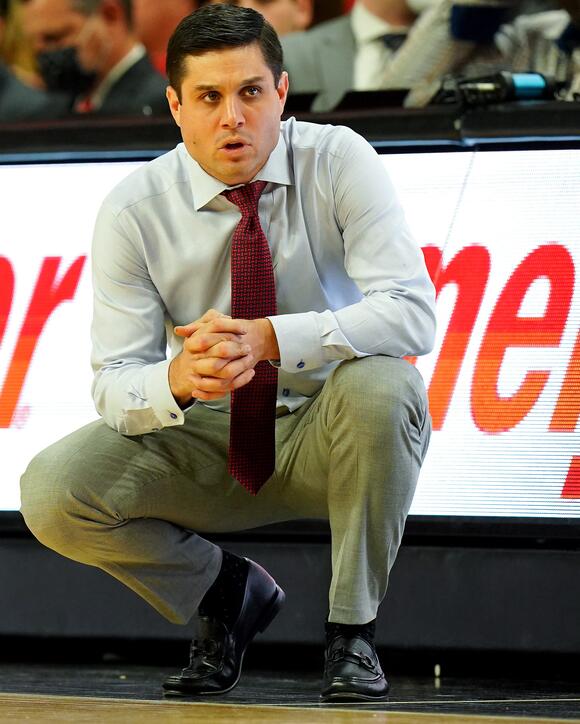 "I think it will help the returning guys. Last year, sometimes offensively, I felt like we were putting so much pressure on David and Jeremiah (Davenport) to create for our team. The way that other teams – especially down the stretch – were able to prepare to take them away, it made it very difficult on them and our team. I think we're going to have a dynamic offensive team now that should free them up to have better opportunities and a better offensive efficiency.

"So yeah, I think the additions will help us in a lot of ways."

'I'm a Bearcat to the death': Viktor Lakhin pledges allegiance to Cincinnati program

More: David DeJulius will return for 'one last dance' with the Cincinnati Bearcats

Perhaps the most notable commitment Miller received in recent weeks came from Taft High School four-star guard Rayvon Griffith . Fresh off leading the Senators to the Division III state championship, Ohio's top recruit for the Class of 2023 announced May 1 his intention to play college ball for Miller and the Bearcats.

The 6-foot-7-inch Griffith chose to stay home at Cincinnati over offers from Alabama, Kansas, Ohio State, UCLA and others.

Though Miller isn't allowed to speak publicly on Griffith or Griffith's commitment until Miller receives Griffith's national letter of intent (per NCAA regulations), Miller did share some of his recruiting philosophy, including the importance of building his program with nearby talent.

"It's Cincinnati. Who we are traditionally as a basketball program and where we're going, we have to attract players in this region, and I don't think you can do that if you don't attract the best players from this community," Miller said. "That's like priority No. 1 in recruiting when we got here, and it's going to continue to be a priority. So yeah, we want to make this region a priority and we want to make this community here a priority for the right guys who fit our program. We're going to continue to do that." 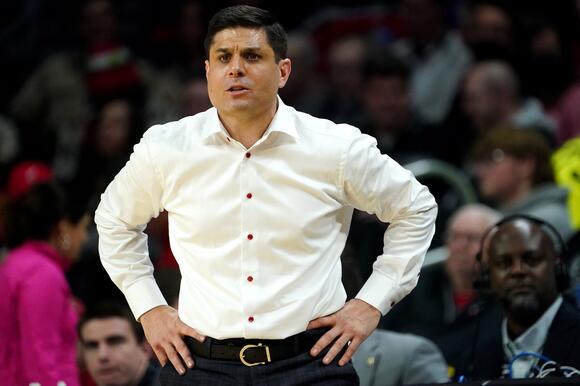 Speaking of local talent, Miller said he hopes the new additions to the roster will create more space and open the floor for senior guard Jeremiah Davenport.

After being the only Bearcats player to earn a spot on the 2021 AAC All-Tournament Team and receiving a preseason second-team All-AAC selection before last season, the former Moeller High School standout saw a decline in his shooting percentages from two-point range, three-point range and from the free-throw line in his junior campaign.

Houston coach Kelvin Sampson said after ousting Cincinnati in the AAC tournament in March that his team knew Davenport was limited offensively and wasn't "going to create a shot for himself."

Miller said Davenport is fully aware of Sampson's words and how teams will try to guard him going forward. 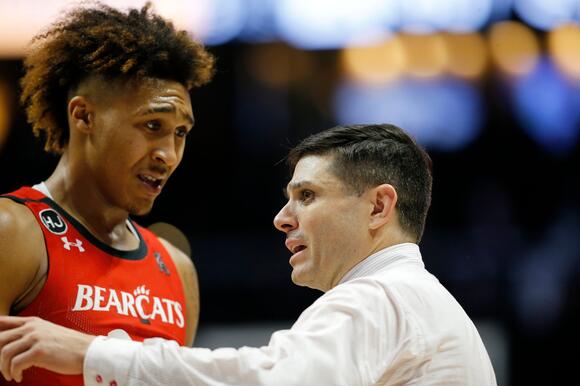 “I think Jeremiah has a real opportunity this offseason to improve as a player. I think he can improve as much as anybody on our roster," Miller said. "It’s something him and I have talked about in depth when the season ended and it’s something that we talk about daily.

"Sometimes we have to realize the position we’re in as players changes. Last year was the first time Jeremiah was at the top of the scouting report. That’s totally different. After doing this for years, I was only at the top of the scouting report once as a player and that’s when I played professionally in England. I’ll always remember that experience because I learned really quickly how difficult that is.

"Every player wants to be a primary offensive option, but it’s really difficult when the other team is designing their defense to take you out. I thought Jeremiah handled that really well at times. I thought sometimes that was difficult. But I think it was really important for his growth and development, and I think he’s really motivated because of the things he learned, especially in league play last year.

“He’s got some things he needs to address and work on, and I think he’s motivated to do that. I think this is a really important offseason for Jeremiah, and I think he’s going to add to his game. I think he’s going to become more dynamic physically with the work that he’s doing with Coach Rehfeldt (UC Associate Athletic Director for Sports Performance Mike Rehfeldt). I’m excited to see the result of what he puts together from now until we start practice in October.”

One notable subtraction from Miller's roster this upcoming season will be top reserve Mike Saunders Jr. The 6-foot guard, who played for two different coaching staffs in his two seasons at Cincinnati, elected to enter the transfer portal following a conversation with Miller at the end of last season.

After averaging 3.5 points and 1.4 assists in 15.5 minutes per game as a freshman under then-Cincinnati coach John Brannen, Saunders averaged 7.3 points and 2.7 assists in 20.2 minutes off the bench under Miller.

Saunders will play his junior season under a third coach (Craig Smith) at Utah.

“I really enjoyed coaching Mike Saunders," Miller said. "I think a great deal of him as a young man and as a player. I don’t want to put words in Mike’s mouth, but I think he had a similar feeling about being a part of our program here. I think he had a great experience and believed in the direction we were going.

“Mike wants to be in a certain role at point guard. I think as we both sat down and talked through the future here, which was neat because both of us were just really honest, it wasn’t a negative thing. I think he felt it was a difficult decision. But maybe the best opportunities for him were to look elsewhere, and we wish him the best.

"College basketball has changed. Sometimes that just makes the most sense. In this specific situation, I think we both saw it that way.” 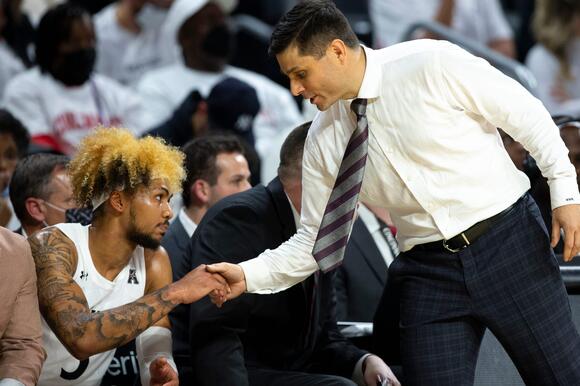 What's next for Wes Miller?

Like in Miller's first offseason as Cincinnati coach, Miller said his goal this offseason will be to build camaraderie. In between workouts, drills and film study, Miller said he wants to continue to sprinkle in some fun once the members of his new-look roster arrive on campus in June.

"We say this all the time, 'We're going to work really hard, we're going to be really demanding, but we're going to have a lot of fun too,'" Miller said. "We're going to enjoy being around each other, and not just on the court. So we'll do some fun activities as a team this summer and this offseason. We'll try to do a better job of documenting that on social media so fans can kind of see us in a different light."

This article originally appeared on Cincinnati Enquirer: The Enquirer sits down with Wes Miller as he prepares for season No. 2 at Cincinnati