By Andrew Buller-Russ
Sportsnaut
3 days ago 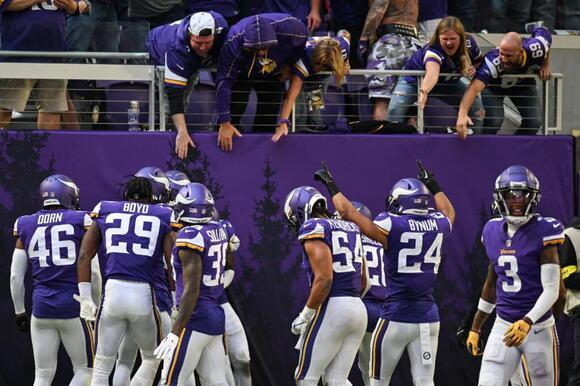 Following their Week 4 win over the New Orleans Saints, the Minnesota Vikings’ schedule continues with a Week 5 clash against the Chicago Bears in at home in U.S. Bank Stadium.

In an offseason where hitting the reset button was a real possibility, the new Vikings leadership team of Kwesi Adofo-Mensah and head coach Kevin O’Connell largely kept the roster intact while adding complementary pieces all around.

Kirk Cousins has an offensive-minded head coach for the first time in purple, and he has their full support. He has one of the best groups of skill position players led by Justin Jefferson, Dalvin Cook, and Adam Thielen, yet the Vikes have several other sneaky candidates for a breakout year.

If the offensive line can improve (a big if), there’s no reason why Cousins can’t offer elite QB production under center in what’s expected to be a pass-heavy approach that gets his playmakers involved more than ever before .

In an attempt to rebuild the defense, they will switch to a 3-4 base under longtime coach Ed Donatell. With Danielle Hunter and Za’Darius Smith causing nightmares off the edge, as long as the two can stay healthy, the pass rush should be top-notch. Eric Kendricks resumes his role as one of the best middle linebackers in coverage and is joined by the run-stopping Jordan Hicks to fill out a high-IQ position group.

An improved front seven should make things easier on the back end, where the Vikings have struggled to plug the leaks aboard their ship. A new injection of talent from first-round pick Lewis Cine, and second-round pick Andrew Booth Jr, along with the return of Patrick Peterson, should fill out a strong secondary with Harrison Smith returning as a longtime leader.

The Vikings should have a playoff spot in their sights. Anything less would be considered a failure. Looking around the division and the NFC conference as a whole, there’s a reason for excitement heading into the 2022 season for Vikings fans.

The Vikings fully believe they have assembled a playoff squad. Until they prove otherwise, there’s no reason to think the 14th-ranked offense from 2021 can’t improve with coach O’Connell taking the reins and all their top contributors returning.

It could be a slow transition to a new defense, but they’ve assembled the pieces, on paper, to improve as a unit in 2022. They have a healthy mix of engrained veteran leadership on both sides of the ball, along with some players who are among the very best at their position. Vikings fans should be excited about this team heading into 2022. If coaching really was the issue, we’re about to find out whether they’ve found a solution.

Related: Love the Vikings? Get involved in the discussion on the Purple Pain forums

Where Is Danielle Hunter?

This offseason, the Minnesota Vikings brought in Green Bay Packers edge rusher Za’Darius Smith. In doing so, he created a tandem with Danielle Hunter that could wind up being among the best in football. So far, though, Hunter has mainly remained non-existent. When the Vikings signed Za’Darius Smith as...
MINNEAPOLIS, MN・2 DAYS AGO
Sportsnaut

The Washington Commanders struck one of the most surprising trades of the 2022 NFL offseason, acquiring Carson Wentz as part
WASHINGTON, DC・1 DAY AGO
Sportsnaut

The Indianapolis Colts square off against Denver on Thursday Night Football in Week 5, but which offensive centerpiece players will
INDIANAPOLIS, IN・1 DAY AGO
Sportsnaut

We’re getting to the point in the season where what we see on the field is who the team is.
INDIANAPOLIS, IN・2 DAYS AGO

The NFL injury report is always filled with some of the game’s best stars, leaving fans and fantasy football managers
NFL・18 HOURS AGO
Sportsnaut

Kirk Ferentz has faced four Wisconsin coaches throughout his Iowa career as a part of the Heartland Trophy rivalry. That ledge will receive another name this season with the Badgers officially parting ways with head coach Paul Chryst Sunday. The move was a sudden one and surprising to many across...
MADISON, WI・1 DAY AGO

Carolina Panthers head coach Matt Rhule is squarely on the NFL hot seat, a favorite to be one of the
CHARLOTTE, NC・2 DAYS AGO
ClutchPoints

The Paul Chryst in Madison has just ended, with the Wisconsin Badgers parting ways with the head coach after a poor start to the 2022 college football season. Losing a job is always a hard experience to go through, but Chryst can take heart from the fact that he is still going to end up with millions of dollars, with Wisconsin football expected to pay him buyout money worth $11 million, albeit a reduced one, per Adam Rittenberg of ESPN.
MADISON, WI・2 DAYS AGO
Sportsnaut

The scene was not great for Matt Rhule and his Carolina Panthers at the tail end of Sunday’s home loss
CHARLOTTE, NC・2 DAYS AGO
Sportsnaut

Tampa Bay Buccaneers quarterback Tom Brady was seen holding his shoulder some during their Week 4 loss to the Kansas
TAMPA, FL・19 HOURS AGO

Bobby Wagner has police report filed against him after tackling protester

The Detroit Lions are in a huge rebuild, but how many games on their 2021 schedule are realistically winnable? Check out our projected record for the Lions.
DETROIT, MI・2 HOURS AGO
Sportsnaut

Improving Jaguars will have to overcome recent history to defeat Texans

The Jacksonville Jaguars have, through four weeks, put on film evidence of their improvement from last season to this one,
JACKSONVILLE, FL・15 HOURS AGO
Sportsnaut

How To Watch the Seattle Seahawks Games Live This Season (2022)

With no more Russel Wilson, the Seattle Seahawks are prepared to turn to Geno Smith and Drew Lock to lead
SEATTLE, WA・14 HOURS AGO
Sportsnaut

The Denver Broncos added veteran running back Latavius Murray to their 53-man roster on Tuesday to fill the void left
DENVER, CO・1 DAY AGO
Yardbarker

Colin Cowherd: Broncos' Nathaniel Hackett 'is not a head coach'

The Broncos (2-2) are the NFL's most penalized team, averaging 9.3 per game -- an issue that could be traced to their first-year head coach. Denver has been penalized 37 times -- an average of 71 yards per game. "We hurt ourselves," said quarterback Russell Wilson when discussing the seven...
DENVER, CO・2 DAYS AGO