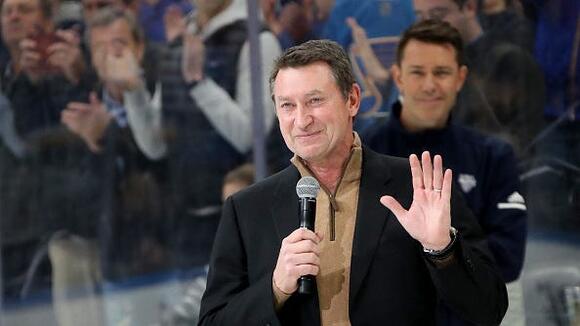 Wayne Gretzky knows how to party, even at 61.

Former NHL player Paul Bissonnette, a colleague of Gretzky’s on TNT’s NHL studio show, recently revealed that The Great One can still hang late into the night with the fellas.

“After these broadcasts, sometimes we go to Wayne’s room until like 4-5 in them morning,” Bissonnette said on “The Pat McAfee Show” ( available on Audacy ). “This guy is the biggest guy’s guy. He will crush beers. He will tell me all these iconic stories. Buddy, it’s a dream come true and that alone is incentive enough for me to fly out here once or twice a week and do this gig – just to hear these stories from the greatest hockey player of all time.”

Bissonnette actually was actually partying at Gretzky’s mansion before getting to “crush beers” with The Great One himself.

He told McAfee he became friends with Gretzky’s sons, Ty and Trevor, who attended Arizona State while he played for the Phoenix Coyotes, and they would throw parties at the Gretzky mansion.

“We would have home games on Saturday, we would go to the bar, and then we’d go back to his place,” Bissonnette said. “Let’s just put it this way: I was batting a thousand at this place. The girls were just everywhere. It was insane.”

Bissonnette actually has Gretzky’s sons to thank for helping him get the TNT gig alongside their father, explaining that they “put in a good word” for him.

“I’ve really got to thank Ty and Trevor for the introduction,” Bissonnette said. “And also for helping me get laid.”

The Celtics employee with whom Ime Udoka had an affair helped make all his travel arrangements ... and that job sometimes included organizing travel for his fiancee, Nia Long. Sources connected to the couple and the NBA franchise tell TMZ ... one of the staffer's duties included planning Udoka's team-related travel, and we're told she was also involved in booking travel for Nia to come to Boston or to road games.
2 DAYS AGO
Black Enterprise

ESPN’s Malika Andrews stirred up more controversy for the NBA’s Boston Celtics when she brought up the history of the team’s interim head coach from more than 13 years ago. During an on-air NBA Today broadcast last week, the sports world was upended when it was reported...
BOSTON, MA・21 HOURS AGO
Audacy

Gregg Popovich gives blunt assessment of Spurs: ‘Nobody should bet on us to win the championship’

Spurs coach Gregg Popovich gave a blunt assessment of his team at Monday’s Media Day, lowering expectations for 2022-23 by telling reporters, “Nobody here should go to Vegas with the thought of betting on us to win the championship.”
SAN ANTONIO, TX・9 HOURS AGO