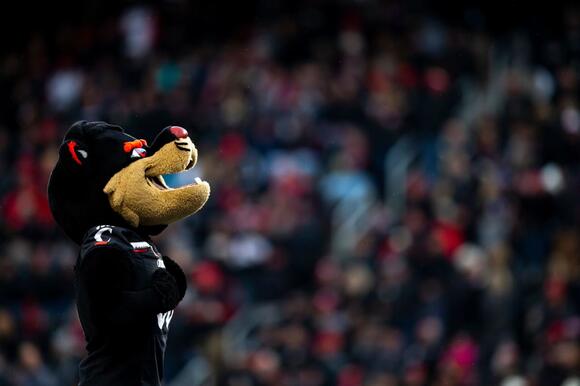 Cincinnati athletics is ready to level up as they get set to enter the Big 12 in the near future.

CINCINNATI — Cincinnati is in the final school grouping for 2023 three-star cornerback Jermaine Mathews out of Winton Woods (Ohio) and he announced a decision date.

According to On3 consensus , Matthews is the 553rd-ranked player nationally and 54th-ranked corner. He holds offers from 31 schools like Kentucky, Miami (OH), and Pittsburgh. Matthews put UC in his top-nine schools last month and On3 has Cincinnati as the favorite to land him (32.6%). Check out his highlights here .

According to 247Sports composite , Powell is the 52nd-ranked player overall and the 15th-ranked small forward. He now holds three offers from NC State and Appalachian State as well. Miller is getting on the ground floor with Powell. Check out his highlights here .

Bearcats Offer Four-Star 2023 Center; Bring in 2024 Sharpshooter for a Visit

Richard Sherman: Coby Bryant 'Will be a Long-Time Starter' for Seattle Seahawks

Desmond Ridder Named one of the 2022 NFL Draft's Biggest Steals

Five UC Football Players That Could be Drafted in 2023

UC Emerges as a Major Winner From the 2022 NFL Draft

Desmond Ridder: Atlanta is 'Going to get a Super Bowl out of me'

Corey Kiner: 'Why Come Closer to Home When I Could Just Come Home?'

Cincinnati's hopes at an at-large NCAA Tournament bid are finished.
CINCINNATI, OH・15 HOURS AGO
All Bearcats

The Bearcats lead 43-36 at half.
CINCINNATI, OH・16 HOURS AGO
All Bearcats

Check out the latest episode of Locked On Bearcats from Alex Frank and Russ Heltman.
CINCINNATI, OH・1 DAY AGO
All Bearcats

The wrestling promotion could turn Jones into a star.
CINCINNATI, OH・2 DAYS AGO
All Bearcats

Scott Satterfield has been at the helm for nearly two months in Clifton.
CINCINNATI, OH・2 DAYS AGO
All Bearcats

All Eyes Are On Wes Miller Against Houston

Can the Bearcats head coach lead the team to a signature win?
CINCINNATI, OH・1 DAY AGO
All Bearcats

Cincinnati has not won a signature game in over a year, and is running out of time to bag one this season.
HOUSTON, TX・2 DAYS AGO