Actor David Dastmalchian fought his own demons; now the KC native is sending ’80s-inspired monsters to you

G rowing up in Kansas City, David Dastmalchian was enamored with his hometown’s most shadowy corners: its fabled haunted houses, the shelves of Clint’s Comics, “Crematia Mortem’s Friday” on local TV, and even his Overland Park neighborhood’s mystical-seeming creeks and forests.

Each of these childhood haunts planted a seed for the Hollywood actor’s latest project — a series of horror comics. Dastmalchian wrote the “Count Crowley” series about a troubled TV journalist named Jerri Bartman who works as a midnight monster movie host and secretly hunts supernatural creatures in her Midwest town.

Among the scenarios Bartman encounters: confronting werewolves and vampires while also attending Alcoholics Anonymous and convincing her loved ones that she hasn’t relapsed — also inspired by Dastmalchian’s struggles with mental illness and addiction.

Published by Dark Horse Comics — famous for titles from “Sin City” and “Hellboy” to “Star Wars” — the series is rolling out in phases.

Click here to check out or purchase the first book in the “County Crowley” series.

With creative projects like “Count Crowley” under way — and having starred in the 2021 blockbusters “ Dune ” as Piter De Vries and “ The Suicide Squad ” as Polka-Dot Man — Dastmalchian, 46, now living in Los Angeles, is approaching a brighter spotlight with immense gratitude.

“Now that I have been able to find a path to mental wellness and healing, [going home] has been really positive and productive for me because I feel like I can look at the whole picture, the whole tapestry of what my childhood looks like, and I’m grateful for every inch of it,” he said.

Dastmalchian’s first experience on stage was in Shawnee Mission Theater in the Park’s production of “Joseph and the Amazing Technicolor Dreamcoat.” That summer, he told his mom he didn’t want to play baseball, but she encouraged him to stay busy and drove him to auditions.

“ I knew that I loved theater …” he said, noting his mother ultimately took him to the American Heartland Theater, Theatre for Young America, and the KCRep Spencer Theater. “I just didn’t know how much it was going to bite me with its infectious bug.”

His teachers at Shawnee Mission South High School were instrumental in shaping his early journey as an actor, he said. Once Dastmalchian graduated in 1994, he went on to study acting and theater at DePaul University in Chicago.

Today, he’s working with filmmakers and actors he used to read about in The Pitch and watch at the Tivoli Cinema at the Nelson-Atkins Museum of Art.

“Every day is such a gift,” said Dastmalchian, describing the philosophy behind how he chooses roles. “I want to spend it with the people who lift me up, who support me, who believe in me, who I can collaborate with in a really healthy and thriving atmosphere.”

Beyond that, he considers the project’s character and material, he said. Regardless of whether it’s horror, superhero, art house, or another genre, Dastmalchian is motivated by roles that give him a glimpse into a way of life or experience that’s different from his own, he said.

“Many times now, fortunately, I’m at a place where I can be a little more selective,” he said. “But I still feel like, who’s reaching out to me? Who wants to involve me? And when people don’t, how can I create my own stories and opportunities to tell and to share? I love it. It gives me so much joy.”

Haunted but not hunted

Still on Dastmalchian’s dream list: filming a TV show in Kansas City and living in the Crossroads Arts District with his wife, muralist Eve Dastmalchian, and two kids, Arlo and Pennie. His last such opportunity was in 2016 when he filmed “ All Creatures Here Below ,” a drama he wrote and starred in, with Missouri native David Koechner in Kansas City. 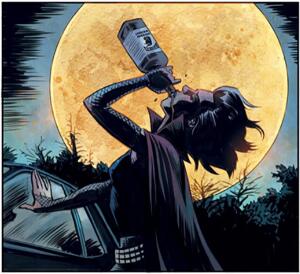 Dastmalchian is already planning to spend a Halloween weekend this fall touring Edge of Hell, The Catacombs, and other Kansas City haunted houses that brought him inspiration in his youth. And a comic book tour in late summer includes a stop at Clint’s, as well as other shops in the area.

Between filming, promoting, traveling, and spending time with his family, Dastmalchian is thankful storytelling can transform his brightest and darkest times into a purposeful comic, he said. It’s an outlet that doesn’t shy away from big topics like equality, discrimination, and mental health.

“It’s almost incalculable the odds that I’m not only alive, considering I battled deep depression and suicide while an opiate addict,” Dastmalchian said. “But the fact that I’m now 20 years into my journey of mental health and recovery and found a career that is all that I ever dreamed about? I’m so grateful every day that this is the life I get to lead.”

The post Actor David Dastmalchian fought his own demons; now the KC native is sending ’80s-inspired monsters to you appeared first on Startland News .

Netflix's new series about serial killer Jeffrey Dahmer is being described by viewers as harrowing, and Evan Peters talked about how he was "very scared" to take on the role.
TV & VIDEOS・10 MINUTES AGO
The Hollywood Reporter

Ava DuVernay has joined this year’s edition of AFI Fest to serve as guest artistic director. As part of the gig, DuVernay has hand-picked three independent films as a way to “amplify the voices and vision of women directors,” per the American Film Institute. Those films are Kat Candler’s Hellion from 2014 starring Juliette Lewis and Aaron Paul, Aurora Guerrero’s Mosquita y Mari from 2012 and Victoria Mahoney’s Yelling to the Sky from 2011 starring Gabourey Sidibe and Zoë Kravitz. More from The Hollywood ReporterCNN's Chloe Melas Champions War Hero Grandad's Memoir Ahead of 'Masters of the Air' DebutTIFF: Steven...
MOVIES・22 MINUTES AGO
WAOK News Talk

In this edition of The Mental Space, the cast and crew of Unemployment Check break down the origin of how the podcast came to life, their roles in the project, and how the pilot episode resonates with their lives, including their mental health.
TV & VIDEOS・24 MINUTES AGO