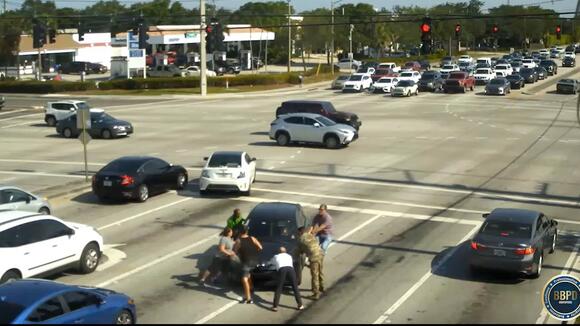 BOYNTON BEACH, Fla. — Police are searching for the good Samaritans credited with preventing tragedy when a driver suffered a medical episode while behind the wheel.

The Boynton Beach Police Department shared video on Facebook showing a car moving slowly into a busy intersection. The video shows a woman run up to the car and bang on the window before getting the attention of other drivers, who all work together to stop the moving car.

In the post, police said that the group used a barbell to break through the window, allowing them access to put the car in park. From there they pushed it to a nearby 7-Eleven, where a nurse on the phone with 911 provided medical attention until emergency crews arrived.

Police said the driver of the car suffered a medical condition and was slumped over the steering wheel of her car, WPTV reported. The woman’s co-worker was in another car and was the woman first seen on video waving her arms to get the attention of other drivers, according to WPTV.

Police said that they shared the video because “They are heroes and we want to bring them back together at the police department to recognize them and meet the woman they rescued.”

A northern Kentucky man is accused of kissing a 5-year-old girl on the mouth while they were passengers on a cruise over the weekend, authorities said. According to an arrest affidavit, Ernest Richard Bishop Jr., 51, of Morning View, was arrested Monday and faces a charge of lewd and lascivious behavior on a child less than 16 years old, WPLG-TV reported. Bishop was arrested after the Carnival Sunrise cruise ship returned to Miami.
MORNING VIEW, KY・1 DAY AGO