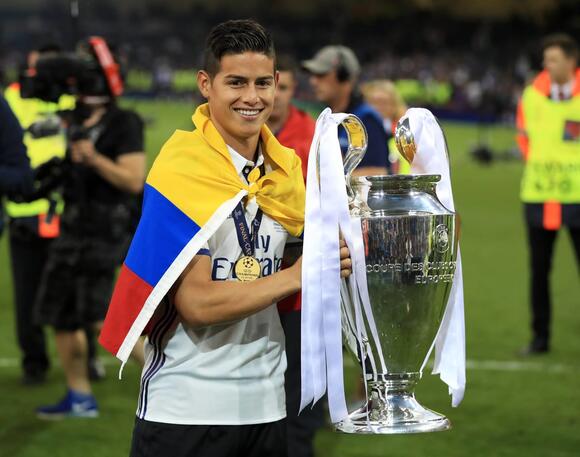 Rodriguez played over 100 matches for Real after joining them for more than £70m in 2014.

Rodriguez played over 100 matches for Real after joining them for more than £70m in 2014.

He later spent a year at Everton, Liverpool's local rivals, scoring six goals in 23 Premier League games in the 2020/21 season.

But the 30-year-old, who now plays for Al-Rayyan in Qatar, wants Liverpool to beat Real at the Stade de France on May 28.

Rodriguez is giving his backing to the Reds because he wants to see Colombia teammate Luis Diaz crowned as a European club champion.

Speaking on his Twitch channel , Rodriguez said: "I want Liverpool to be champion. I have many friends in Real Madrid and it is a difficult team for this type of match, but I want Lucho to win."

Diaz has been a revelation for Liverpool since arriving from Porto, another one of Rodriguez's former clubs, in January.

He has scored three goals and provided three assists in his last seven Liverpool appearances, despite only completing 90 minutes in two of those matches.

Rodriguez is a two-time Champions League winner with Real, having contributed to their triumphant campaigns in the 2015/16 and 2016/17 seasons.

But he did not feature in either final. He was an unused substitute in the 2016 final, where Real beat Atletico 5-3 on penalties, before missing out on a place in the squad all together a year later when his teammates thrashed Juventus 4-1.

Holland became the first team ever to qualify for the UEFA Nations League finals more than once on Sunday night.
SOCCER・2 DAYS AGO
Futbol on FanNation

Jamaica built a four-man wall in line with the center of their goal, while an extra defender lay on the ground in an effort to stop Messi from shooting low. It did not work.
FIFA・21 HOURS AGO
Futbol on FanNation

It is now looking increasingly likely that Alexander-Arnold will not be going to Qatar 2022 as he appears to be behind Reece James, Kieran Trippier and Kyle Walker in the pecking order of England right-backs.
PREMIER LEAGUE・2 DAYS AGO

Van Gaal experimented a little on Sunday when he deployed Malacia as a left-sided center-back for the second half of Holland's Nations League game with Belgium.
PREMIER LEAGUE・1 DAY AGO
Futbol on FanNation

England said goodbye to League A in the UEFA Nations League in style on Monday night by playing out a six-goal thriller with Germany.
SOCCER・1 DAY AGO
Futbol on FanNation

Brazil's players had stood in front of an anti-racism banner before Tuesday's 5-1 win over Tunisia.
WORLD・1 DAY AGO