All Knicks brings you the latest news, highlights, and analysis surrounding the New York Knicks. 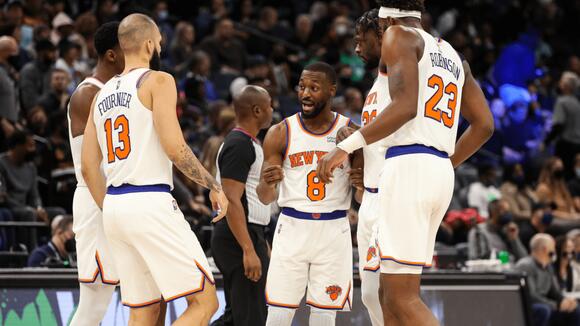 A return to glory for the New York Knicks? Childs' play centers on Mitchell Robinson.

Chris Childs knows a thing or two about Manhattan-based hardwood success. His nine years in the NBA are best-known for five seasons with the Knicks, where he served as a reliable contributor off the bench. Most notably, Childs was one of seven Knicks to partake in all 20 games of the franchise's most recent run to the NBA Finals in 1999.

Childs' knowledge of the prior and modern Knicks came up in an interview with the Bad Weather Fans Podcast this week. The former point guard believes that the current Knicks' path forward involves a big contract for the impending free agent Robinson, who is set to hit the market after four seasons in blue and orange.

"He's in that mode. I don't see why they wouldn't bring him back," Childs told hosts Mike Bisceglia and Alex Benesowitz. "There's nobody out there at that position right now that is warranted to bring in, that's available, because everybody that's the center that's playing well, they're going to get maxed out anyway."

Childs certainly knows the impact of having a dominant interior game: his New York tenure overlapped with Patrick Ewing's prime seasons, though an injury infamously kept the Hall-of-Famer from partaking in the final stages of the 1999 Finals run.

Robinson has been one of the most, if not the most Knicks representative of the past four seasons, averaging 8.4 points and 7.5 rebounds (setting a career-best with 8.6 in the latter last season). Childs acknowledged that while Robinson's injury woes have been an issue (missing more than half of the Knicks' run to the playoffs in 2021) but that bringing him back would be one of the wisest moves the team could make in the coming offseason.

"I'm pretty sure they're going to move (Kemba Walker),'' Childs said, suggesting "max dollars'' for Robinson."You need somebody in here to clog up the middle. He's shown he can do that. He is injury-prone right now, he needs to bulk up just a little bit more to take that pounding in the paint, but he's effective at what he does. They should bring him back."

Childs also issued a vote of confidence to embattled head coach Tom Thibodeau, one of the last active connection to that famed group from the 1999 season. Thibodeau worked Childs during the former's opening years as a Knicks assistant (1996-2004) under Jeff Van Gundy.

Citing the friction with Walker, Childs noted that "It's just unfortunate that when you're handcuffed as far as decision making on personnel to get the guys that you're comfortable with that you notice calling to go out there and play the game the way you want it play."

Childs' time in New York saw the team win at least one playoff series in each of his four full years with the team. Ironically, Childs played a major role in that streak ending: traded to Toronto Raptors in the midst of the 2000-01 season, Childs burnt the Knicks when the teams met in the ensuing playoffs, notably scoring a personal postseason-best 25 points in a crucial Game 4 victory that helped the Canadian visitors not only stave off elimination but go back to Madison Square Garden and win the series in five contests.

Fonder metropolitan memories dominated Childs' time with Bisceglia and Benesowitz, primarily the third game of the 1999 Eastern Conference Finals against the Indiana Pacers. Childs came one point short of a double-double in that showdown, which ended with Larry Johnson's four-point play in the final seconds that put the Knicks ahead for good in a 92-91 victory.

"The play was called "X" where Allan (Houston) and (Latrell Sprewell) cross each other and Patrick (Ewing) goes down screen for Allan to come up top...and the ball got deflected," Childs, situated on the other end of the MSG floor, said as he described the play. Citing Antonio Davis, the guilty party in the infraction that made history, as a personal friend, Childs questioned whether it was indeed a foul but praised Johnson's ability to make a move that led to the fateful foul.

"I don't know why Antonio fell for it," Childs said. "He jabbed right. He bit he took one dribble left, shot the ball."

Childs had 10 assists in that game, but his unlisted 11th might've been the mos crucial of all. With MSG rocking and the game taking place in the heat of the Knicks and Pacers' intense late 1990s rivalry, Johnson nearly let emotions get the best of him before his winning free throw. It was Childs who talked him down, immediately running over from the far end of the court.

"When it went in, my point guard instincts kick in automatically. (The game is tied," Childs recalled. "(Johnson) wants to run the other end and put the L up. I'm like, 'No, calm down, we're only tied. Concentrate, shoot the free throw. Then, freaking (Sprewell) runs up behind me and he's all celebrating, and hitting me in the back. I'm like 'Spre, leave him alone, he needs to make these free throws!'"

Childs' words, built over a well-cultured relationship with Johnson, were eventually enough to calm the shooter down long enough to sink the sealing free throw. It was part of a team nature that Childs  hopes the modern Knicks group ... including the fans ... could glean a lesson or two from.

"We had a great chemistry. We didn't need the coach, the owners, or anybody to police us, we policed ourselves," he said. " But it wasn't just us man. It was the fans. It was a city we wanted to make them proud of us. We wanted them to come and we wanted to put on a show...That's what carried us against the Bulls, Indiana, Miami, all those great teams is that we weren't allowed to not work."

Former Cleveland Cavaliers forward Richard Jefferson commented in a series of tweets on the likely suspension of Boston Celtics head coach Ime Udoka for a relationship with a female team staffer. Jefferson’s confusion on the suspension is because the expected length will be a full year when the final decision...
BOSTON, MA・2 DAYS AGO
All Knicks

Knicks Bring Back M.J. Walker For Another Training Camp

Could Knicks Give Obi Toppin Increased Role this Season?

The New York Knicks have some more room in the frontcourt, meaning added playing time could be coming Obi Toppin's way.
NEW YORK CITY, NY・2 DAYS AGO
All Knicks

Things will be a little different for Jalen Brunson this season, as he goes from a Dallas Mavericks squad that made the Western Conference Finals to a New York Knicks squad that didn't even make the play-in tournament. Regardless, Brunson should be up for the challenge.
NEW YORK CITY, NY・2 DAYS AGO

Boston Celtics head coach Ime Udoka is suspended for the upcoming NBA season after an inappropriate and consensual sexual relationship with a female staffer who also accused him of making “unwanted comments” toward her. The news appeared to blindside Udoka’s fiancée Nia Long, as the actress posted a cryptic message on Instagram following the news, but it goes a little deeper than that.
BOSTON, MA・1 DAY AGO
All Knicks

Many have clamored for the Knicks to grant their 2021 first-rounder a bigger opportunity, especially after a publicized summer.
NEW YORK CITY, NY・11 HOURS AGO

All Knicks brings you the latest news, highlights, and analysis surrounding the New York Knicks.