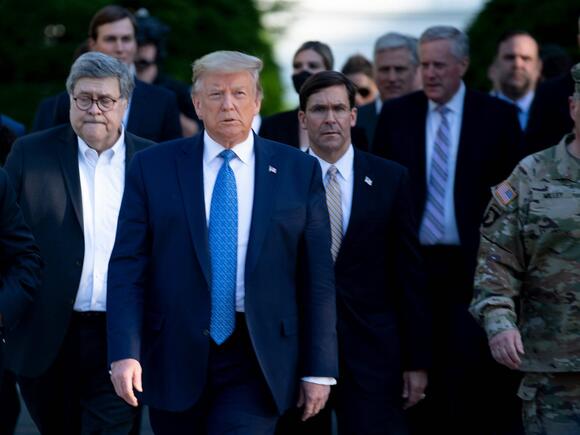 Former Defense Secretary Mark Esper on Monday characterized former President Donald Trump as a threat to US democracy, citing his role in inciting the deadly January 6 insurrection and his refusal to accept the results of the 2020 election he lost.

"I think that given the events of January 6, given how he has undermined the election results, he incited people to come to DC, stirred them up that morning, and failed to call them off — to me, that threatens our democracy," Esper, who served as Trump's Pentagon chief from July 2019 to November 2020, told Fox News' Bret Baier.

"What else can you conclude, Bret?" Esper added. It was a remarkable rebuke of a former president by one of the most senior cabinet members who had worked for them.

As Esper alluded to, Trump rejected the 2020 election results and falsely claimed he won, pushing baseless allegations of mass voter fraud and pressing the Justice Department to declare the results corrupt. In the process, Trump incited a deadly riot at the US Capitol on January 6 when lawmakers met to certify President Joe Biden's Electoral College victory.

Many democracy watchdogs and top experts have also warned that Trump poses a threat to fundamental democratic norms and have said his behavior mirrors that of authoritarians. Freedom House's annual "Freedom in the World" report in 2021 said that Trump oversaw "unprecedented attacks on one of the world's most visible and influential democracies."

Esper on Monday also told Fox News he hopes Trump does not run for president again in 2024, stating that the former president is too divisive for the country.

"I hope he doesn't," Esper said when asked if he believes Trump will run for president again. "I hope the Republican base can figure out that while President Trump pushed a lot of traditional Republican ideas…that there are other candidates out there that could run that could do it without dividing the people, without creating such tension within the country, and do it by growing the base as well."

Esper told MSNBC on Tuesday that he would not vote for Trump if he runs again.

The former defense secretary and Army veteran, who wrote a memoir on his time in the Trump administration that was published Tuesday, has sat for a number of interviews with major outlets in recent days.

Trump, for his part, has denied many of the claims in Esper's book. In a statement to "60 Minutes," Trump referred to Esper as a "lightweight."

"Mark Esper was weak and totally ineffective, and because of it, I had to run the military," Trump said.

People who commit Treason, by attempting to overthrow a Fair and Secure Election they lost, in addition to inciting an Insurrection against Congress, tend to threaten Democracy.

the qop don't care about trumps faults. they just want to win at any cost. including your freedoms from government interference into your.life.

Former President Trump responded Wednesday to Russian President Vladimir Putin’s hinting at being willing to use nuclear weapons in Ukraine, saying that the conflict should never have happened and that it could lead to a world war. Trump said on his social media platform Truth Social that the conflict...
POTUS・6 DAYS AGO
Business Insider

Donald Trump called Mitch McConnell a "piece of shit," according to a forthcoming book by Maggie Haberman. The former president said he thought congressional leaders would rule "with an iron fist." Trump spoke with Haberman for her book "Confidence Man: The Making of Donald Trump and the Breaking of America."
POTUS・2 DAYS AGO
Business Insider

Trump said he didn't "understand" why DeSantis wasn't more appreciative of him, per a WaPo report. "I knew him from watching Fox, and he'd done a good job about me and other things," Trump said of DeSantis. Per the report, Trump advisors are looking for weaknesses in a potential 2024...
FLORIDA STATE・2 DAYS AGO
Business Insider

Patriarch Kirill I said Russian soldiers who die in the war will be absolved of "sins." The Sunday sermin came days after Russia announced the mobilization of 300,000 troops. Kirill is known to support Russian President Vladimir Putin and the invasion of Ukraine. The leader of the Russian Orthodox Church...
RELIGION・1 DAY AGO

Trump told Maggie Haberman that Lindsey Graham "kisses my ass" to "endorse his friends." Haberman detailed a scene at Bedminster with Trump and an effusive Graham in the vicinity. Over the past seven years, Graham has morphed from Trump critic to confidant. During the 2016 Republican presidential primary, Sen. Lindsey...
POTUS・2 DAYS AGO
Business Insider

McConnell's support for the Senate bill to reform the Electoral Count Act comes just days after all but 9 Republicans voted against the House version.
PRESIDENTIAL ELECTION・7 HOURS AGO
Business Insider

Before being known primarily as Donald Trump’s errand boy, Chris Christie was a prosecutor. And he’s using that expertise to issue a warning to Donald Trump: shut your trap. During an appearance on ABC the former New Jersey Governor said the “nonsense arguments” (you know, like that he...
POTUS・1 DAY AGO

DeSantis thinks Chris Christie "missed his moment" in running for the White House in 2016, per WaPo. Christie passed on a 2012 campaign and opted to run in 2016, where he faced Donald Trump. DeSantis is up for reelection in November and could potentially launch a 2024 campaign of his...
FLORIDA STATE・2 DAYS AGO
Business Insider

Rep. Nancy Mace says there's "a lot of pressure" on Republicans to impeach President Biden. On NBC's Meet The Press, Mace said impeachment is being considered by some in the GOP. She told host Chuck Todd that if the party chooses to hold a vote, she believes it will be...
CONGRESS & COURTS・2 DAYS AGO
Business Insider

Trump has informed some political donors to stop boosting Ron DeSantis, per The Washington Post. During his calls with donors, the ex-president said that DeSantis could be a potential 2024 rival. Trump's endorsement of DeSantis' 2018 gubernatorial bid was a key moment in the governor's political rise. Former President Donald...
FLORIDA STATE・2 DAYS AGO
Business Insider

Recent incidents in Russia appear to be part of an effort to undermine the Russian military, but the perpetrators may not all be working together.
PUBLIC SAFETY・1 DAY AGO
Daily Mail

Former liberal MSNBC host and sportscaster Keith Olbermann revealed on Monday that he'd dated Democratic Arizona Senator Kyrsten Sinema over a decade ago. Olbermann, who currently hosts a podcast, didn't spare his disappointment with the moderate senator, claiming that she previously was even more liberal than him. The ex-SportsCenter and...
ARIZONA STATE・22 HOURS AGO
Business Insider

Former President Donald Trump said that the "rich friends" he secretly made while in office had made his term in the White House worth it, according to new extracts from a book by The New York Times' Maggie Haberman. In extracts from the book, "Confidence Man," published in the Atlantic...
POTUS・1 DAY AGO
Newsweek

Reps. Adam Schiff and Liz Cheney, two of the House members investigating the events of January 6, 2021, said Trump was involved in the Capitol riot.
POTUS・1 DAY AGO
Business Insider

A Russian crime boss was killed in Ukraine after being recruited from prison to fight in the war, report says

Igor Kusk had been serving a 23-years for murder when he volunteered to fight in Ukraine. He reportedly was serving with the shadowy Wagner Group.
PUBLIC SAFETY・2 DAYS AGO