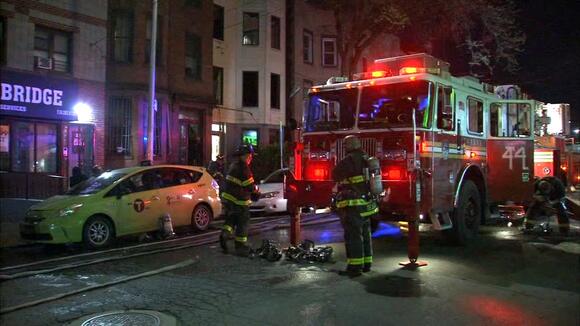 Several people suffered minor injuries after a fire broke out at building in the Bronx Monday night. FDNY officials said more than 100 firefighters worked to put out the two-alarm fire that started inside a three-story building located at 1022 Ogden Avenue in the Highbridge section around 9:15 p.m. Three people who suffered minor injuries refused medical attention. The fire was placed under control just after 10 p.m., FDNY officials said. The cause of the fire is under investigation. This is breaking news. This story will be updated as more information becomes available. ---------- * More Bronx news * Send us a news tip * Download the abc7NY app for breaking news alerts * Follow us on YouTube

1 in critical condition for smoke inhalation after fire in Brooklyn apartment building: Officials

The resident was taken to a local hospital in critical condition to be treated for smoke inhalation.
BROOKLYN, NY・15 HOURS AGO
ABCNY

The fire marshal says the fire in upper Manhattan was accidental and caused by electrical wiring in the ceiling of the top floor.
NEW YORK CITY, NY・13 HOURS AGO
ABCNY

The victim is in the hospital being treated for the burns on her face. Police could not immediately identify the chemical liquid thrown at her.
BROOKLYN, NY・20 HOURS AGO
ABCNY

Suspect in critical condition after police-involved shooting in the Bronx

Officials say the 39-year-old suspect is known to the police and is in critical condition after being shot in the head and leg.
BRONX, NY・44 MINUTES AGO
ABCNY

The five suspects -- four men and one woman, all dressed in black, robbed a man of his jacket and cell phone near 63rd and Amsterdam Ave, police say.
NEW YORK CITY, NY・12 HOURS AGO
ABCNY

As firefighters work to put out the flames in a Queens deli, Metropolitan Avenue and the M subway line nearby have been temporarily closed.
QUEENS, NY・3 DAYS AGO
ABCNY

Police say the 24-year-old suspect who they believe hit the cyclist, is in custody awaiting charges.
NEW YORK CITY, NY・34 MINUTES AGO
ABCNY

Two men were walking on Amsterdam Avenue near 148th Street in Hamilton Heights last Tuesday. One guy pulled an orange baseball bat from his pants and struck the other man's head from behind.
MANHATTAN, NY・7 HOURS AGO
ABCNY

Dix Hills residents on edge after series of car break-ins

The latest community to be hit is the hamlet of Dix Hills in Suffolk County. Police have been piecing together clues thanks to surveillance cameras on front doors.
DIX HILLS, NY・1 DAY AGO
ABCNY

The NYPD says a gunman wanted for shooting a Bronx gas station worker, may also be responsible for the shooting of a Philadelphia Parking Authority officer.
PHILADELPHIA, PA・1 DAY AGO
ABCNY

Scores of people were left without homes Thursday night when a raging fire broke out inside a building in West New York.
WEST NEW YORK, NJ・1 DAY AGO
ABCNY

Scores of people were left without homes Thursday night when a raging fire broke out inside a building in West New York.
WEST NEW YORK, NJ・2 DAYS AGO
ABCNY

A 15-year-old has died after attempting to subway surf a train on a New York City bridge Thursday.
NEW YORK CITY, NY・1 DAY AGO
ABCNY

Suspect in police custody for trespassing in Manhattan hotel, leaving suspicious substance behind

55-year-old John Taddei of Queens has been charged with theft of services and criminal trespass.
NEW YORK CITY, NY・3 DAYS AGO
ABCNY

A 74-year-old pedestrian was struck and killed by a motorcyclist in Queens Tuesday afternoon.
MANHATTAN, NY・3 DAYS AGO
ABCNY

It is the first of three Sundays the city will open up the streets to pedestrians this holiday season.
NEW YORK CITY, NY・6 HOURS AGO
ABCNY

The westbound vehicle jumped the divider and smashed into the Pinelawn Road overpass just before 7 a.m.
SUFFOLK COUNTY, NY・3 DAYS AGO