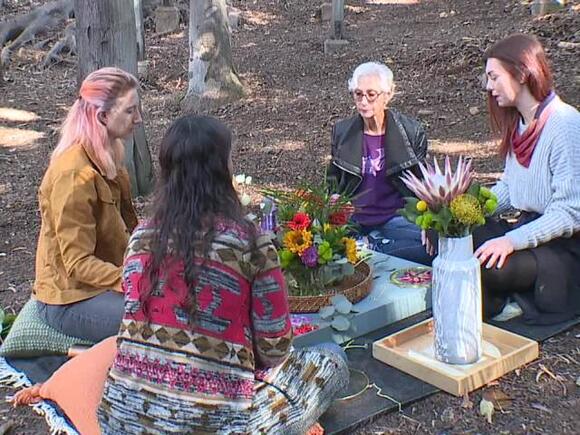 SAN DIEGO (KGTV) -- Starting your own business isn't easy and growing it can be even harder, but what if you had an experienced mentor to guide you?

Rachael McDaniel took advantage of the free local help to grow the art as self-care business, Ray of Light Offerings , she started three years ago.

“I've always been interested in the arts and human psychology,” says Rachael.

Her workshops use art as a way to help women relax, de-stress and get in touch with how they're feeling.

“We have a focus that is less on mastering a specific art technique and more focus on how the artist feels while they're creating.”

Rachael says by “art” she means almost everything from the dramatic arts, to music, to visual to nature-based art. Rachael credits much of the growth of her business to SCORE, a national nonprofit dedicated to helping small businesses succeed.

SCORE stands for Service Corps of Retired Executives, and SCORE San Diego is one of 310 chapters that have more than 11,000 volunteer mentors, including Beverly Pamensky, who built three startup companies.

“She is really great at explaining what is the highest priority for a business in the startup process,” Rachael said about Beverly.

One thing Rachael's SCORE mentor helped her do is transition her business from sole proprietorship to an LLC, or limited liability company, which carries tax and liability benefits.

“All the confusion and roadblocks that happened in years past now just feel like little hiccups that are easy to overcome,” says Rachael.

Bob Ritz understands that. He's been a SCORE mentor for 14 years.

“I was in the men's apparel business so I worked for a lot of the big national brands, did sales and marketing for them.”

Bob says when business owners like Rachael succeed, it underscores the impact this kind of guidance can have. He says he wishes he’d had a SCORE mentor when he was working to grow his own business years ago.

“I really wish I had had, yeah, who knows where it might have gone?”

Where it's going is a question full of promise for Rachael and her workshops which she often holds in Balboa Park.

“Balboa Park is so centrally located and beautiful with all the plants here.”

As Rachael teaches her clients to relax into their emotions by making mandalas, which she says symbolize the beginnings of the universe, she is grateful for the SCORE advice that helped her relax.

It's a good weekend for pumpkin patches and Oktoberfest celebrations, because fall is officially upon us.
SAN DIEGO, CA・1 DAY AGO
ABC 10 News KGTV

In honor of breast cancer awareness month, one local organization is helping women with free mammograms. One in eight women are diagnosed with breast cancer in the United States.
SAN DIEGO, CA・1 DAY AGO

San Diego Police were in the East Village Tuesday asking the unsheltered to take down their tents during the day
SAN DIEGO, CA・2 DAYS AGO
ABC 10 News KGTV

The Tijuana Slough Shoreline -- from the international border to the south end of Seacoast Drive -- will remain closed until sampling confirms the water is safe, according to the county.
IMPERIAL BEACH, CA・8 HOURS AGO
ABC 10 News KGTV

During the COVID-19 pandemic, food insecurity in our community grew to one in three people needing help.
SAN DIEGO, CA・5 DAYS AGO
ABC 10 News KGTV

A man appeared in court Wednesday for a string of fires at one home in the San Diego community of Stockton, but neighbors don't think his arrest will be the end of it.
SAN DIEGO, CA・1 DAY AGO
ABC 10 News KGTV

A local organization is helping inspire women and children who are victims of abuse to read by creating a safe space for them at local shelters.
SAN DIEGO COUNTY, CA・5 DAYS AGO
ABC 10 News KGTV

Homeless advocates are at odds with an old San Diego Police tactic addressing the homeless that is now making a comeback.
SAN DIEGO, CA・2 DAYS AGO
ABC 10 News KGTV

They estimate more than four feet of water got inside the home. All of their furniture was damaged beyond repair and their clothes were soiled.
SAN DIEGO, CA・2 DAYS AGO
ABC 10 News KGTV

In his news release, Desmond said, "Understanding how SVPs are handled will help us to protect our neighborhoods from these unwanted criminals."
SAN DIEGO COUNTY, CA・3 HOURS AGO
ABC 10 News KGTV

OPEC Plus, which is a group of oil producing nations led by Russia and Saudi Arabia, is cutting production by 2 million barrels per day to boost prices.
SAN DIEGO COUNTY, CA・6 HOURS AGO
ABC 10 News KGTV

Two Ukrainian prisoners of war are in San Diego raising awareness about the atrocities of the war overseas. ABC 10News spoke with a Ukrainian commander.
SAN DIEGO, CA・2 DAYS AGO
ABC 10 News KGTV

The fate of more than 100 pigs left by the side of Mesa Grande Road in Santa Ysabel last week remained up in the air Wednesday, even as locals work to keep some of them healthy and fed.
SANTA YSABEL, CA・1 DAY AGO