Troy Williams: Fayetteville Market House should remain, as a place of history and reflection 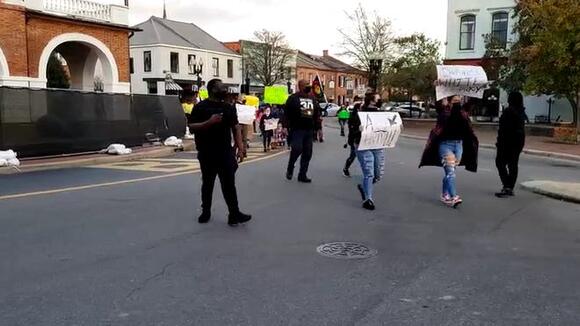 The Market House is the most controversial piece of Fayetteville’s history. The downtown historic building is a symbol of pride for some, a visible reminder of how far enslaved Africans have progressed and a symbol of shame and hatred for others.

Undeniably, some enslaved Africans were sold there, but it’s not likely that's how the place was used exclusively. The question remains: Is this painful past worth confronting? The Fayetteville City Council is seeking more community input on what to do with the building. A focus group has recommended repurposing the Market House as a place for local art exhibitions and tours to represent Black culture and history. The council wants more input from citizens, and that's a good idea.

A couple of years ago, I wrote a column about the Market House, articulating the merits of both sides of the issue. In response, a young pastor from one of Fayetteville's more prominent Black churches chastised me, stating that the only way I could be against racism would be in agreement with destroying the building. He’s entitled to his opinion, but I beg to differ.

Let the building remain. I see it as a place where I can pay respect to my ancestors who were victims of human bondage: a time to grieve and a time to be reflective. I realize this discussion takes place when many communities across America are grappling with how to earnestly and honestly frame narratives around historical sites, particularly ones connected to the legacy of the Confederate-era and slavery. I don't believe most people want anything which would perpetuate a glorified version of the life of an enslaver, but history is a path with many lanes.

Previously, I leased office space in the Self-Help Building at 100 Hay Street for 15 years overlooking Market Square; the roundabout at the center is the junction of Green, Person, Gillespie and Hay Streets downtown. Despite its reputation, I frequently observed diverse populations using the venue as a place for photographs, prayer vigils and protests. The protests were usually nonviolent, except for the 2020 George Floyd protests when the building was set on fire by protesters causing minimal damage.

I can understand growing community disdain for monuments expressing and reinforcing white supremacy and the Confederacy. The Market House is not one of those symbols. Fayetteville was the capital of North Carolina from 1789 to 1794. The Market House was built in 1832 on the site of the old state house and town hall, which burned down in 1831.

If this is just about tearing down places where enslaved people were sold, then don't stop there; go a block further down Gillespie Street and demolish the old county courthouse. For sure, slaves were auctioned off there, too, since foreclosures and estate sales were conducted on the courthouse steps.

And then there's the issue of Murchison Road. Fort Bragg is already slated to be renamed because of its name and connection to a Confederate general. The Murchison families were slave owners and Confederate officers, too. Rename the road University Boulevard for Fayetteville State University. I realize renaming Murchison Road is a touchy subject for some African Americans. The Murchison slave owners' name is near and dear to some people's hearts.

When former President George W. Bush signed the legislation authorizing the creation of the National Museum of African American History and Culture in Washington D.C., he said: “A great nation does not hide its history; it faces its flaws and corrects them.” I believe the same can be said of our community. I think destroying old buildings where atrocities occurred against our ancestors will not solve our problems.

Let's keep the old brick and mortar so people can explain history to their kids. The constructive dialog will always be healthy for our community.

I've been waiting 60 years for someone to show the citizens of fayetteville 1 picture or 1 document of a slave being sold or traded on those steps.the city council has yet to show any of that.its because the city council is still trying to divide us by race even more.so for the ones that belief the city council.ask them to present you with those pictures or documents.they can't.because it never happen.

if you dont like Fayettevilles history...MOVE somewhere that's more appealing to you...

Just because it has a history doesn't mean it's right to have a painful reminder of enslaved ancestors still standing after all these years. Heaven forbid doing the right thing makes others uncomfortable!