INDIANAPOLIS — Terry Taylor is arguably the greatest player in Austin Peay history, and Duane Washington Jr. was a standout at one of the premier programs in the country, Ohio State.

Neither player heard their name called during last year's NBA Draft, but by the end of the 2021-22 season they were rotational players for the Pacers and had earned standard multiyear deals in the league. It was an unexpected rise for the undrafted rookies, although maybe it wasn't. Because regardless of the odds, there were always two people who believed Washington and Taylor could do it: themselves.

"Honestly, I didn't (impress myself)," Taylor said in an exit interview with Pacers sideline reporter Pat Boylan. "I know how impactful I am and what I do and what I bring to a team and the game. So I wasn't really too much impressed because I've been doing it my whole life. You can check everywhere I went, I've won or I've impacted the game in a positive way."

Insider: High-flying Oshae Brissett's contract should be at the top of Pacers' to-do list

'Maybe I have a chance, too': Pacers' Goga Bitadze inspired by fellow countryman Zaza Pachulia Taylor and Washington began the season with Indiana's G League affiliate, the Fort Wayne Mad Ants, and were eventually signed to two-way contracts, meaning they would split time between the G League and the Pacers. Neither had noteworthy NBA debuts, with Washington going scoreless in 51 seconds at Brooklyn on Oct. 29, and Taylor going scoreless in 50 seconds against the Nets on Jan. 5.

But as the year went on — and due to COVID-19, injuries and trades — they were called upon to play big minutes in the NBA and took advantage. Washington tallied 20 points and a game-high four 3s at Cleveland in his second start Jan. 2, and Taylor totaled 21 points and 14 rebounds in his first start against Chicago on Feb. 4.

Washington said he never focused on how his NBA career began but rather where he plans to take it.

"A lot of people have great stories about being drafted super early, super high-round picks and stuff like that," Washington told Boylan. "There's also stories that have undrafted guys that have had a real impact in this league. (So) just for me, not comparing myself to anybody. Understanding that everybody's journey is different and looks a lot different for everybody.

"I'm writing my own story and it's a beautiful thing." 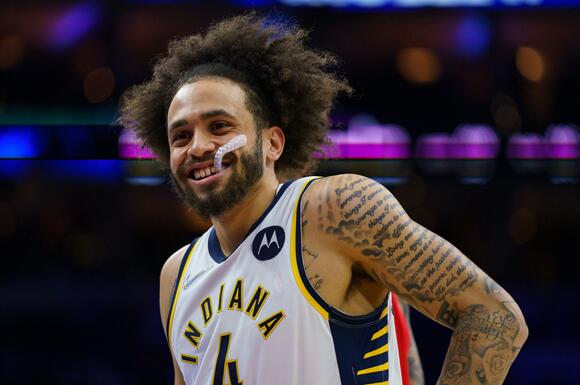 Washington averaged 9.9 points and shot 37.7% on 3-pointers in 48 games during his rookie season. The 6-3 guard notched four 20-point games, highlighted by a 21-point night at New Orleans on Jan. 24, when he drained a franchise rookie-record seven 3s.

Taylor, an undersized 6-5 forward, averaged 9.6 points and 5.2 rebounds in 33 games, and had six outings with at least five offensive rebounds. He registered career highs of 24 points and 16 rebounds against Orlando on Feb. 2.

After Taylor and Washington proved they belonged, and with two games left in the season, the Pacers announced that their two-way contracts had been converted into standard multiyear deals.

"My agent called me and was like, 'Yo, we're gonna get this done Thursday (April 7),' so he was telling me congrats," Taylor said. "After we hung up the phone, I just prayed because it finally happened.

The 2022 NBA Draft is slated for June 23 at Barclays Center in Brooklyn. It will be a pivotal night for the Pacers, who are guaranteed their first single-digit pick since 1989. But for the players who won't hear their names called, Washington thinks his and Taylor's journeys can serve as inspiration.

"It was hard for me to accept that, going undrafted and feeling like I should've been a part of those 60 guys," Washington said. " ... To everybody out there who feels like they're being compared and on the short end of the stick, just keep working, put your head down, keep that chip on your shoulder and take it to the top."

The Pacers won their first preseason game on the road in Charlotte, beating the Hornets 122-97, not that the final score is particularly important. It was the first look of several players in a Pacers uniform, and others played together for the first time. Here are five takeaways from the night. Indiana's next action will be Friday night in New York.
INDIANAPOLIS, IN・2 HOURS AGO
95.7 The Game

'It's pretty different': Pacers rookies adjust to life in NBA on and off the court

INDIANAPOLIS — Bennedict Mathurin’s only obligation is basketball, and he has more free time as a result. For two years in college, he was a student who had to balance class with life on the court. Now he has a full-time job with the Pacers. In his spare...
INDIANAPOLIS, IN・1 DAY AGO
IndyStar | The Indianapolis Star

What the Pacers are looking for from their first preseason game

INDIANAPOLIS — The Pacers’ first preseason game, Wednesday night in Charlotte, will be a juggling act for coach Rick Carlisle. It’s Indiana’s first action against an opponent that isn’t itself in six months. It’s an opportunity to see a roster filled with newcomers and young players react to its first game together. Carlisle said Tuesday he’d go deep into the bench and the only player not available is center Daniel Theis, who is easing into action after playing in EuroBasket over the summer.
INDIANAPOLIS, IN・19 HOURS AGO

Peyton Manning prefers to talk offense, but he gave Los Angeles Rams linebacker Bobby Wagner props Monday night for tackling a protestor who had run onto the field during the Rams' game against the San Francisco 49ers. Peyton initially called the intruder a "streaker," though the person was clothed. He...
NFL・2 DAYS AGO
IndyStar | The Indianapolis Star

Colts rule Jonathan Taylor out against the Broncos with ankle injury

DENVER - The Colts are not going to push it with Jonathan Taylor on a short week. Indianapolis has ruled out the reigning NFL rushing champion a day ahead of a Thursday night road game against the Broncos. They have also ruled out free safety Julian Blackmon for the second straight game with an ankle injury.
INDIANAPOLIS, IN・11 HOURS AGO
IndyStar | The Indianapolis Star

How the Colts will replace Jonathan Taylor (ankle) if he can't play vs. Broncos

INDIANAPOLIS — Jonathan Taylor's status for a looming Thursday night game remains up in the air after the Colts running back suffered a sprained ankle in Sunday's loss to the Titans, a league source told IndyStar. Further tests on Taylor’s ankle were negative Monday, ESPN and the NFL Network...
INDIANAPOLIS, IN・2 DAYS AGO
IndyStar | The Indianapolis Star

IndyStar insiders Joel A. Erickson and Nate Atkins break down the Colts in advance of Thursday night’s game in Denver, diving deep into the offensive line’s problems, the rest of the blocking and the team’s offensive breakdown as a whole.
INDIANAPOLIS, IN・1 DAY AGO

Doyel: College football is big business. So big buyouts be damned if you want to keep up.

Wisconsin fired Paul Chryst on Sunday, fired him five games into the 2022 college football season, fired him with a career record of 67-26. Just sent him packing, humiliated the former Wisconsin quarterback, as if his previous seven seasons — all ending in bowl games, the Badgers winning six of those — hadn’t happened. ...
MADISON, WI・2 DAYS AGO
IndyStar | The Indianapolis Star

INDIANAPOLIS — The Colts had to make a move. Indianapolis has been taking advantage of the NFL’s expanded practice squad rules for three weeks by keeping kicker Chase McLaughlin there, elevating him on game day and protecting a spot on the 53-man roster. ...
INDIANAPOLIS, IN・1 DAY AGO
IndyStar | The Indianapolis Star

INDIANAPOLIS — The Colts have spent almost the entire season playing from behind, desperately trying to climb out of a deep, dark hole with potential footholds crumbling the entire way. The one time they scored a touchdown in the first quarter, it was handed to them. The two times...
INDIANAPOLIS, IN・19 HOURS AGO
IndyStar | The Indianapolis Star

Butler football's Don Benbow must have been a saint. He follows me everywhere, even golf

GREENFIELD -- I was eating a pulled pork sandwich with a bag of Lay's potato chips after a golf tournament when a guy washing down carts at Arrowhead Golf Course noticed my name on a scorecard. Lou Hurrle walked inside where nearly 100 golfers sat eating, laughing, drinking beer and...
INDIANAPOLIS, IN・19 HOURS AGO

A matchup of potential Class 4A state championship contenders – possibly the favorites – will highlight the schedule for the six-game Forum Tipoff Classic, one of the annual highlights on the high school basketball schedule. Defending 4A state champion Cathedral, which is led by Michigan State recruit Xavier...
BLOOMINGTON, IN・1 DAY AGO