Paul Noel tackled problems in New Orleans. He'll have to do it again as Knoxville police chief

In 2010, New Orleans Police Department Lt. Paul Noel was tasked with taking over a sex crimes unit crippled by scandal over how the department reported sexual assault complaints.

Once in charge, Noel charged ahead with reform, raising questions about the unit's practices and prompting internal and external reviews.

Things got worse before they got better, including scrutiny from the U.S. Department of Justice’s Civil Rights Division and eventually a court-mandated overhaul in how sex crimes and domestic violence investigations were handled.

Still, by the time Noel was promoted to commander of the department's criminal investigations unit the following year, he had begun the process of overseeing the clearing of a backlog of 800 untested rape kits and led an effort to reopen at least 30 sexual assault complaints improperly downgraded to noncriminal incidents, according to NOLA.com . 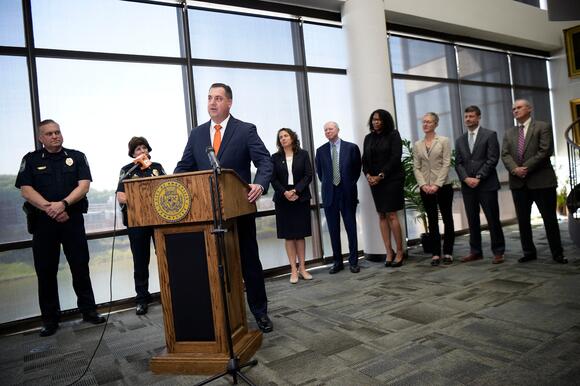 Now, he takes over a Knoxville Police Department with a command structure short of top leaders after a series of internal investigations and allegations of a racist culture have led to a series of resignations.

More: A cop told bosses a fellow cop was racist. They did nothing.

Noel and his wife and young child are in town briefly as they begin piecing together what life will look like in Knoxville. He spent Sunday speaking at roll call for every shift, introducing himself to officers as he begins to wrap his arms around the new role.

Knox News sat down with Noel for a brief discussion during Tuesday’s City Council meeting during which council members were discussing, among other things, a budget package that includes significant pay bumps for city personnel , including police officers.

A portion of that conversation follows. Questions and answers have been lightly edited for length and clarity.

Knox News: In 2010 you took over a sex crimes unit in New Orleans and very quickly found things that were amiss ... you come into this role and work needs to be done. What are your priorities for that?

Noel: So, several things right off the bat. We need to select the new leadership within the organization, there are holes in deputy chief positions, as you know. So that’s something I’m working on, evaluating the existing staff. That’s something I’m gonna do in the first week, because obviously I don’t know anybody so I have to take time and evaluate the members and evaluate the organization ...

Joining ABLE ( Active Bystandership for Law Enforcement program is an offshoot of New Orleans' Ethical Policing Is Courageous program that Noel is known for) is something we’re going to do that first week. To join ABLE you need four letters: one from the mayor, a letter from myself both vouching for our commitment to the 10 core principles of ABLE ... but also (they require) two letters from community groups supporting the department ...

The rest is just going to be taking a deep dive into the organization, evaluating policies and procedures and take a look at analytics, ... I’m committed to a data-driven approach to policing. I’m committed to data transparency as much as possible.”

Knox News: What is the key to unlocking the potential in recruiting to fill holes?

Noel: The reason I wanted to be here (at the City Council meeting) today is because this budget proposal is really important. You know, the men and women of the Knoxville Police Department have a lot of pride, I’ve seen that. But you can’t take pride to the grocery store and buy anything. So, that’s why this pay is so important because it’s not only going to help retain our officers, it’s going to help us go out and help us recruit not only new police officers to our academy, but also help with our lateral transfers as well ...

More: 'I will not let you down': Paul Noel, an ethics advocate, named Knoxville's police chief

Knoxville has a lot to offer, and I wouldn't be here if I didn't want to spend the rest of my life in this city. I wouldn't be here if I didn’t think that this was a good police department. So, this budget and this pay raise for these police officers is going to be crucial for us to be able to retain the existing staff, but also (help) go out and bring in brand new police officers that want to join our department and attract lateral transfers as well.

Knox News: New Orleans’ police department is much larger and it’s a bigger city compared to Knoxville. Can you talk about the pros and cons of those differences?

Noel: I think it’s all scalable, I really do.

The best time in my career, when I had the most fun and I got the most fulfillment was when I was the commander of the 2nd District ... It has a population of about 100,000 people, we had 120-130 police officers underneath me. And I got enjoyment from immersing myself in the community, immersing myself into the police officers, learning about where they wanted to be in five years, learning about their families.

“So, Knoxville is a midsized police department and a midsized city, but it’s also small enough where I can have those personal connections with the community and the officers. That’s why I’m here. I’m not here looking to use this as a stepping stone. I truly hope that I'm the police chief here for a really long time and I would be absolutely satisfied and tickled to death if this was the last full-time job I ever had."

Knox News: What does transparency mean?

“(Data transparency) doesn’t happen overnight. I’ve got no idea what the data capabilities of KPD are yet so I’m really working at a disadvantage because I don’t want to over-promise. But I am absolutely committed it.

“In New Orleans (before a cyber attack took some of it down) we had public dashboards where you could go on and see our calls for service data. You could see our response times. You could see raw citizen complaint data – you couldn’t see that person X came in, but you could see the raw data and I’m committed to all of that as long as our systems can do it ...

“But I’m also committed to how we police (the) community and being open with the public about what our plans are ... that communication is real important.”

Noel was the deputy superintendent in charge of the New Orleans Police Department’s criminal investigations division. He was a finalist in Chattanooga’s police chief search earlier this year.

This article originally appeared on Knoxville News Sentinel: Paul Noel tackled problems in New Orleans. He'll have to do it again as Knoxville police chief