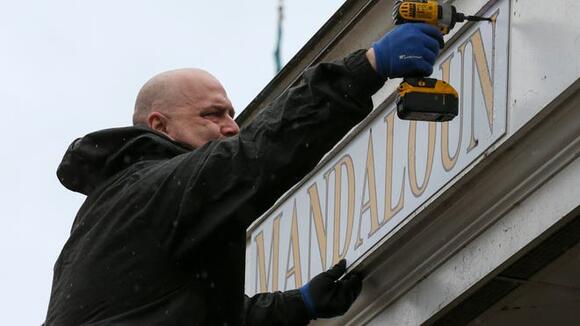 Florent Geroux wasn't invited into the winner's circle following the 2021 Kentucky Derby. There were no flowers or cheers for the French jockey who rode Mandaloun to a second-place finish. He understood why.

On Feb. 27 — over 300 days after Geroux finished second— Medina Spirit's title was officially stripped by the Kentucky Horse Racing Commission after testing positive for the banned race-day substance betamethasone. Baffert was given a 90-day suspension, while Geroux and Mandaloun were elevated to the title of champion.

Yet a year after the original race, Geroux still feels second best.

"I don't feel like it," Geroux said of being the official champion. "There's no feeling to be honest because I didn't cross the wire first and didn't really win the race."

Geroux may enter the 2022 Kentucky Derby as the defending champion, but in his eyes, he is just like every other jockey looking for their moment in the winner's circle.

"I'm just a lucky recipient," Geroux said. "We all wanted to cross the wire first, the excitement of the race and experience the winner's circle and the roses and have the public cheering for us."

Who is Florent Geroux, the 2021 Kentucky Derby winning jockey?

Geroux, 35, was born in Argentan, France, and grew up following his father's footsteps. Dominique Geroux passed down his jockey knowledge to his son and Florent took it to another level.

At 13, Geroux was accepted into Afasec, a French riding academy. When he was 18, he won his first race at a track in Paris called Longchamp on Chopyluz. By age 21, he was a part of the American horse racing scene.

Geroux's life in America didn't start off strong. He broke his wrist on his first day at Keeneland and his first Grade-1 win came a full decade after his first victory back at Longchamp.

Also: Why this Churchill Downs chef says cooking for 300,000 at Kentucky Derby is 'a celebration'

Over time, though, Geroux became one of the most respected jockeys in the horse racing world and 2016 was his breakout year. Highlighted by a win in the Louisiana Derby, a second-place finish in the Breeder's Cup Dirt Mile and a third-place finish in the Kentucky Derby, Geroux earned $17,690,013 — fifth best that year amongst jockeys.

As the money poured in, the hunger for first didn't wane. Geroux kept his eyes on the biggest prizes in thoroughbred racing — the Kentucky Derby.

Despite notching a plethora of major racing wins and Breeder's Cup victories, Geroux couldn't place again in the fastest two minutes in sports. That was until he took a 26-1 longshot to Churchill Downs in 2021.

How did Mandaloun, Florent Geroux win the 2021 Kentucky Derby?

Mandaloun never led the race but stayed close behind Medina Spirit by tucking in at the rail and nearly stole it at the end before falling half a length short. Little did Geroux know at the time that Mandaloun had done just enough to win — eventually.

"Nobody wants to win a race by DQ," Geroux said. "There's no merit to it."

Despite Geroux's feelings toward his Kentucky Derby title, the veteran jockey can't wait to try to win it outright on May 7.

On that date, Geroux will ride Brad Cox's trained horse Cyberknife in the 148th Run for the Roses. Cox says that Cyberknife has talent but can be "challenging in the mornings" and "tough on riders."

Cyberknife and Geroux have already been successful together. Cyberknife won the $1.25 million Arkansas Derby by 2 3/4 lengths before the colt dumped Geroux during all the excitement at the post parade. Geroux won't mind if he continues to get the best out of the horse.

"I know what kind of trip you need to win the Derby," Geroux said. "You need the right horse too but I feel like this year especially is wide open. The deserving favorite is going to be Epicenter but then after that, it's really up in the air."

Geroux is a Kentucky Derby champion but the roses, winner circle and glory on race day still eludes him. After coming so close last year, 2022 may finally be the year he feels worthy of the title "champion."

Kentucky 'Top Chef' finalist to compete for world champ title in new season. What to expect

A popular chef from Paducah, Kentucky and the runner up on Season 16 of "Top Chef" is ready to jump back into the frying pan. We first met chef Sara Bradley when she was a contestant on Season 16 of Bravo's "Top Chef." The award-winning television series, hosted by Padma Lakshmi, spent two months in Kentucky in 2018.
KENTUCKY STATE・18 HOURS AGO