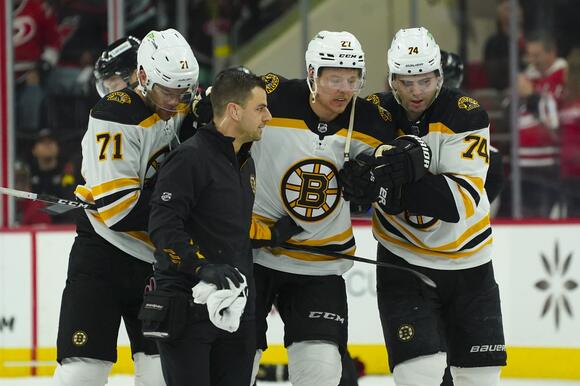 Things went from bad to worse for the Bruins late in the second period Wednesday night when defenseman Hampus Lindholm suffered what appeared to be a head injury on a heavy hit from Hurricanes forward Andrei Svechnikov.

After taking a D-to-D pass behind his own net, Lindholm turned up ice and right into an oncoming Svechnikov, whom he didn't see until the very last second.

Lindholm was visibly woozy after the hit and actually needed teammate Linus Ullmark to grab him and keep him from falling when he tried to stand up. He needed help getting off the ice and was later ruled out for the remainder of the game with an upper-body injury.

Svechnikov was not penalized for the hit. He got two minutes for roughing for the scrum that followed, but the Bruins actually ended up shorthanded because Brandon Carlo got four minutes worth of penalties for the same scrum.

The Hurricanes then ended up with a 5-on-3 when Derek Forbort took a holding penalty and eventually scored to increase their lead to 4-1. They went on to win 5-2.

Bruins coach Bruce Cassidy said after the game that Lindholm was "not doing well" and that he wasn't sure if Lindholm would be able to travel back to Boston with the team.

"Well, it looked high to me," Cassidy said of the hit. "That's why he left the game, he has an upper-body injury. It was on time, certainly, but it looked high. They didn't see it that way."

We will find out on Thursday if there's any supplemental discipline coming for Svechnikov. There certainly appears to be some shoulder-to-chin contact on the hit, but the league will need to determine if that was the principal point of contact, or if Svechnikov got enough chest first.

"Sometimes those get reviewed, sometimes they don't," Cassidy said. "I don't know if this one will. I haven't heard anything. We'll see on that."

Svechnikov said after the game that he felt that Lindholm got hurt, but that he thought he needed to throw the hit in that situation.

"Obviously I like the physical part of the game, but I feel bad for that guy," he said. "It was a pretty hard hit. I was in that spot where I kind of had to hit him there, and he didn't see me, but I had to do that. But I feel bad and sorry for him."

The Boston Bruins made nine more cuts on Thursday, including their most surprising yet: Sending 23-year-old Billerica native Marc McLaughlin to Providence.
BOSTON, MA・14 HOURS AGO
WEEI Sports Radio

Why this preseason loss was especially disappointing for Bruins

With a chance for numerous bubble players to state their case, no one really did in the Boston Bruins’ disappointing 1-0 preseason loss to the New Jersey Devils on Monday.
BOSTON, MA・2 DAYS AGO
WEEI Sports Radio

Bruins cut several players as they continue to trim down roster

The Boston Bruins made three cuts on Tuesday, placing forward Oskar Steen and defensemen Connor Carrick and Nick Wolff on waivers. All three could now be claimed by another team.
BOSTON, MA・2 DAYS AGO
WEEI Sports Radio

NBA general managers dissed Jayson Tatum in a preseason survey, with nobody selecting the Boston Celtics star as a favorite to win the MVP award.
BOSTON, MA・1 DAY AGO