Wes Miller: 'Crucial Offseason' Ahead for Pair of Bearcats 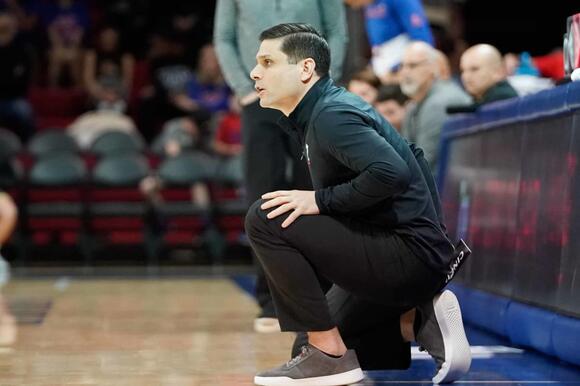 The basketball team has added plenty of talent recently, but still needs some internal development to make it all come together.

"Jeremiah Davenport, No. 1," Miller said about the player he wants to develop most this summer. "He can take a humungous leap. He was at the top of the scouting report for the first time in his college career, where the other team was designed to take him away. That’s always an interesting transition for a player, to deal with that. I thought he handled it well. But now he understands what he has to do to take another step as a player. This is a crucial offseason for him, and there’s so much room for him to improve. He’s such a gifted offensive player as it stands."

Davenport (13.4 points, 5.5 rebounds, 0.8 assists) was one of the best scorers on the team last year, but he can do a lot to round out his game. The obvious areas for improvement are with on and off-ball defense, plus, playmaking in transition and in the halfcourt. At 6-foot-7, 205 pounds, Davenport has all the physical tools to improve across those areas.

Lakhin (4.2 points, 3.5 rebounds, 0.2 assists) is a few years younger than Davenport and hasn't had as much time to get a normal development program working, but that's changing in 2022.

"And then I look at our frontcourt guys," Miller said . "They all are important. I don’t want to minimize anybody else. But I look at Viktor Lakhin, who’s as gifted as anybody on our whole roster. But he was a first-year player in college basketball, coming from Europe. In my experience, kids coming directly from Europe who haven’t been in prep school or something, that first year is a big adjustment, no matter how high a level they’ve played.

The Russian has played in 29 games last season after missing the entire 2020-21 campaign due to injury. Lakhin was the most efficient shooter on the team last year (54.9% true shooting) and now needs to expand that into a larger shot diet this season.

He brings a lot of strong minutes on defense, but the offense needs to come around for Cincinnati's frontcourt to meet expectations in 2022-23. Read the full conversation here .

UC Emerges as a Major Winner From the 2022 NFL Draft

Desmond Ridder: Atlanta is 'Going to get a Super Bowl out of me'

Corey Kiner: 'Why Come Closer to Home When I Could Just Come Home?'

The wrestling promotion could turn Jones into a star.
CINCINNATI, OH・1 DAY AGO
HorseshoeHuddle

Meetings between the Indianapolis Colts and head coaching candidate Raheem Morris have reportedly been all positive.
INDIANAPOLIS, IN・27 MINUTES AGO
Falcon Report

Scott Satterfield has been at the helm for nearly two months in Clifton.
CINCINNATI, OH・1 DAY AGO
All Bearcats

Are the best shooters taking the most shots?
CINCINNATI, OH・2 DAYS AGO
The Big Lead

It looks like Dak isn’t doing too bad after his playoff loss to the San Francisco 49ers NFC divisional round this past Sunday…. Dallas Cowboys quarterback Dak Prescott has a new lady in his life, Louisiana State University swimmer named Jadyn Jannasch (her Instagram profile picture features her wearing a Cowboys jacket as well):
LOUISIANA STATE・1 DAY AGO
FadeawayWorld.net

Former Hornets owner Bob Johnson admitted that selling the franchise was one of his big regrets.
CHARLOTTE, NC・1 DAY AGO
Yardbarker

The Kansas City Chiefs delivered bad news on Travis Kelce Friday. The Chief’s tight end had a big week against the Jacksonville Jaguars in the Divisional Round win as he caught two touchdown passes. He caught 12 touchdown passes in the regular season. Kelce was expecting to be a...
KANSAS CITY, MO・15 HOURS AGO
TexansDaily

The Broncos have seemingly targeted DeMeco Ryans as their top candidate to become Denver’s new head coach. And so, it seems, have the Texans. So why would Houston lose this tug-of-war? Walmart?!
HOUSTON, TX・26 MINUTES AGO
All Bearcats

Check out the latest episode of Locked On Bearcats from Alex Frank and Russ Heltman.
CINCINNATI, OH・21 HOURS AGO
All Bearcats

All Eyes Are On Wes Miller Against Houston

Can the Bearcats head coach lead the team to a signature win?
CINCINNATI, OH・15 HOURS AGO
All Bearcats

Cincinnati should have multiple players drafted in 2023.
CINCINNATI, OH・16 HOURS AGO
All Bearcats

Cincinnati has not won a signature game in over a year, and is running out of time to bag one this season.
HOUSTON, TX・1 DAY AGO
JaguarReport

What We Learned About the Jaguars in 2022: Defensive Review

The Jaguars' defense made big plays throughout the entire 2022 season in their first year under Doug Pederson and defensive coordinator Mike Caldwell. But what did we learn in the process?
JACKSONVILLE, FL・13 MINUTES AGO