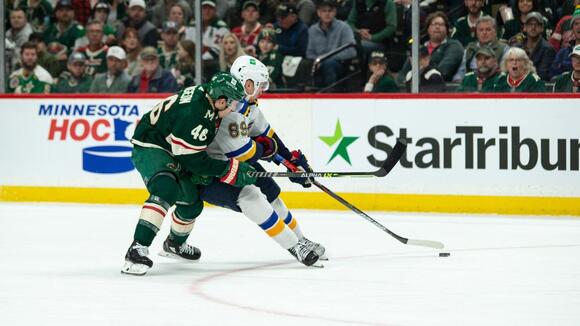 ST. PAUL, Minn. (WCCO) — Frustrations were high for Minnesota Wild players during Monday night’s 4-0 loss to the St. Louis Blues , and defenseman Jared Spurgeon is going to pay for letting his temper get the best of him.

Spurgeon cross-checked the Blues’ Pavel Buchnevich, prompting a $5,000 fine from the NHL. The broadcast showed Spurgeon hitting Buchnevich in the back of his leg with his stick while both were kneeling on the ice and Buchnevich’s back was turned.

Spurgeon was penalized for the hit.

“We’ve gotta play between the whistles and forget about the crap,” he said. “We don’t need to do that … They’re penalties that are avoidable.”

The Blues scored two power play goals during Monday night’s game. The Wild were 0-for-6 on the power play.

Spurgeon was fined the maximum allowable amount, per the NHL.

The Wild now trail the Blues 1-0 in their first round playoff series. Game 2 is Wednesday night at the Xcel Energy Center.

EAGAN, Minn. - Through four NFL seasons, running back Alexander Mattison has started six games, serving as the understudy to Dalvin Cook's starring role with the Minnesota Vikings.Mattison, a third-round pick in 2019 out of Boise State, has demonstrated his importance when he's received his opportunities. In four of his starts, he's run for at least 90 yards. He's added five touchdowns when Cook is out of the lineup.Having Mattison available has been a luxury for Minnesota."He's that next guy-up mentality, and if you want a guy that you want to look ...
MINNEAPOLIS, MN・1 DAY AGO
CBS Minnesota

MINNEAPOLIS - Matt Wallner hit a two-run homer, Bailey Ober had a career-high 10 strikeouts and the Minnesota Twins beat the Chicago White Sox 4-0 on Wednesday night.Ober (2-3) threw a career-high 7 1/3 innings, allowing just two hits."I was in control of the whole game," Ober said. "I was controlling my tempo. I was keeping them off-balance and I wasn't falling behind too much. I was able to stay in attack mode and I kind of noticed these guys were swinging a lot. I was able to expand a little bit."Wallner, the...
CHICAGO, IL・2 DAYS AGO