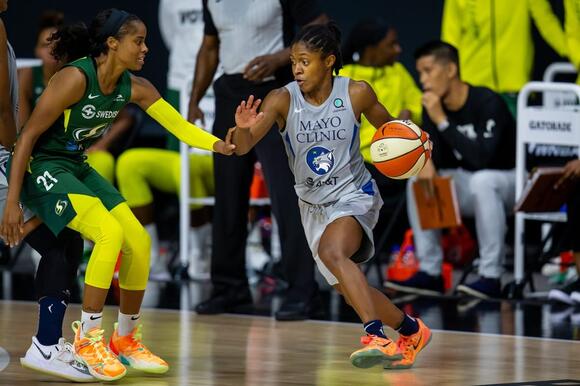 Lynx bring back Odyssey Sims and cut 2020 Rookie of the Year Crystal Dangerfield.

Crystal Dangerfield, the 2020 WNBA Rookie of the Year, was among the players waived by the Minnesota Lynx on Tuesday. Meanwhile, Odyssey Sims is back and likely to start at point guard for the Lynx after resigning with the team.

Sims played for the Atlanta Dream last season, having spent the prior two seasons with the Lynx, including the 2019 campaign when she led the Lynx in scoring and was named to the All-WNBA second team.

Clarendon getting cut grabs headlines considering she started 20 games for the Lynx last season and averaged 10.4 points and 5.7 assists while shooting 51.1% from the field.

Sjerven was the 28th overall pick in this year's WNBA Draft. She was a star center at South Dakota State University after graduating from Rogers High School in the Twin Cities metro area.

It's unclear what the starting lineup will look like when the Lynx open the season Friday night at Seattle, but it could look like this:

Minnesota is without star forward Napheesa Collier, who is expecting the birth of her child this month. Collier signed a contract extension with the Lynx on Monday , though terms of the deal have not been announced per WNBA policy.

The Lynx open the regular season at Seattle Friday at 9 p.m. The home opener is Sunday at 7 p.m. against the Washington Mystics.

The Los Angeles Clippers announced on Tuesday that they have waived Juwan Morgan, Michael Devoe and Lucas Williamson, three players who had signed training camp deals with the team.
LOS ANGELES, CA・7 MINUTES AGO
Bring Me The Sports

What the Timberwolves can glean from the NBA GM survey

Bottom line: Minnesota has to prove it before they get real respect.
MINNEAPOLIS, MN・1 HOUR AGO
Bring Me The Sports

Jones replaces Shawn Parker, who stepped down earlier this year.
MINNEAPOLIS, MN・1 DAY AGO
Bring Me The Sports

No reason Timberwolves shouldn't get off to a very fast start

The Wolves should be extremely confident entering a tougher stretch of games in November.
MINNEAPOLIS, MN・4 HOURS AGO

KAT said he's at the lowest weight of his playing career.
MINNEAPOLIS, MN・1 DAY AGO
Bring Me The Sports

Can the Twins find an ace this offseason?

The Twins need an upgrade on the mound, but who is available this offseason?
MINNEAPOLIS, MN・8 HOURS AGO
Falcon Report

Falcons Coach Provides Update on Injured CB Isaiah Oliver; When Will He Return?

Just over one year removed from a season-ending knee injury, Atlanta Falcons cornerback Isaiah Oliver is eligible to be activated from the injured reserve. Falcons coach Arthur Smith offered new information as to when Oliver will return to action for Atlanta's defense.
ATLANTA, GA・13 MINUTES AGO

The Tigers' struggles through the air continue to plague their offense while the rushing attack is slowly finding their groove.
BATON ROUGE, LA・10 MINUTES AGO
92.9 The Game

Braves' home-field advantage one of the strongest in MLB

The Braves took care of business against their division rival Mets in one of the biggest series of the season and the fans did their part, showing why they have one of the best advantages in baseball
MLB・12 MINUTES AGO
Bring Me The Sports

Brian Murphy: There's a lot to learn about these Vikings

Brian Murphy writes that the double-doink-fueled hot start for the Vikings is not without some questions.
MINNEAPOLIS, MN・5 HOURS AGO
Bring Me The Sports

Luis Arraez stands between Aaron Judge and the triple crown

Three days to go and the batting title race is up for grabs.
MINNEAPOLIS, MN・1 DAY AGO