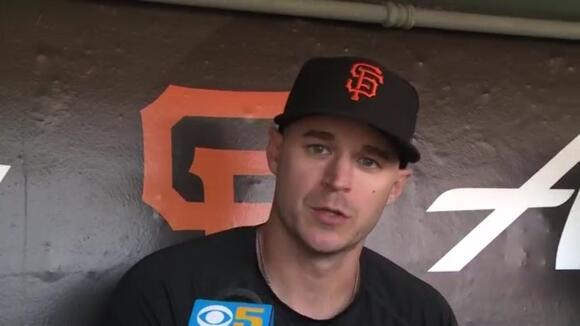 SAN FRANCISCO (KPIX 5) — San Francisco Giants outfielder Jason Krizan has over 1,100 career hits in the minor leagues. None of them were as special as the one he had Sunday against the Washington Nationals at Oracle Park.

“It’s been such a special moment for me,” Krizan said after the game.

He ripped a solid single to right field in his 7th at bat with the Giants. It capped off a weekend the Krizan family will never forget.
His wife Kristen told KPIX 5, “This whole thing – I’m, like, pinch me. Is this really happening?”

The 32-year-old Krizan was called up before Friday’s game against Washington. He has spent over a decade in the minor leagues waiting for this moment. He never gave up on his dream of reaching the majors.

“I keep getting a uniform and I enjoy the game,” said Krizan.”It’s a lot of fun so I’m going to keep going as long as I can.”

Kristen was with him for all three games at Oracle Park this weekend and it didn’t take long to realize they were in the big leagues.

“We actually have to sit in our assigned seats, there’s a lot of people here, it’s loud, there’s lines for everything,” she said. “It’s a lot different than most of the ballparks he’s played in.”

But the Krizan’s don’t know when they’ll be back. After Sunday’s game, the Giants optioned Jason back to Triple A where he will rejoin the Sacramento Rivercats and work toward getting another chance for his second career hit.

The story of Sunday’s AFC Championship Game is getting very muddied for many reasons. Over the next few days and weeks, NFL fans around the country will discuss the officiating of the game between the Kansas City Chiefs and the Cincinnati Bengals. It’s quite simple to understand why. These...
CINCINNATI, OH・1 DAY AGO