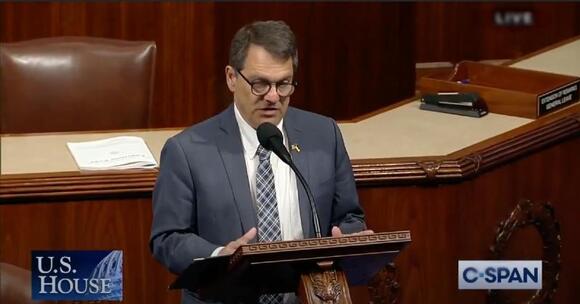 Last week, U.S. Rep. Gus Bilirakis, R-Fla., took to the House floor to denounce what he referred to as “the complete and utter failure of the Biden administration’s dangerous open border policies.”

Bilirakis highlighted that there were 221,303 migrant encounters at the southern border in March of this year, which is a 542 percent increase from March of 2020. He noted that over 2.4 million migrants have illegally crossed into the country since President Joe Biden took office, marking the largest surge of migrants in American history. Of this group, 42 were on the Terrorist Screening Database. Bilirakis pointed out that this number of migrant encounters does not account for the known getaways who were seen by border patrol agents but evaded capture.

“God only knows how many in this group may have terrorist connections or wish to do our country harm. The Border Patrol officials are working tirelessly, but the system is clearly overwhelmed. This is a glaring national security concern,” said Bilirakis. “As these illegal migrants reside comfortably in communities throughout our country, I am fighting the Biden Administration on behalf of one of my constituents. This constituent, an American citizen, has been told by the Department of Homeland Security that his wife and daughter who have fled war-torn Ukraine must wait outside the country for up to two years for a VISA interview. The only logical conclusion is that President Biden’s policies reward those who violate our laws and punish those who try to do the right thing. This has to stop!”

Bilirakis pointed to the “tragic example of the exceptional danger law enforcement personnel face at the border, with Texas National Guardsman Spc. Bishop Evans drowning…while courageously working to save individuals trying to cross the Rio Grande River illegally” while “the Biden Administration is actively working to repeal Title 42, a Trump-era policy used as a tool to prevent illegal border crossings.”

“Repeal of Title 42 is expected to cause another surge of illegal entries. “It is undeniable that the Biden Border Crisis is out-of-control,” Bilirakis said. “The Biden administration must be held accountable for the damage that has already been done and the horrific conditions it continues to facilitate.”

This week, U.S. Rep. María Elvira Salazar, R-Fla., sent President Joe Biden a letter expressing her “strong opposition to any U.S. government aid going to the regime in Cuba.”. Recent news stories reported that the regime has made overtures to the Biden administration requesting aid as a result...
FOREIGN POLICY・1 DAY AGO
FloridaDaily

A new poll from Mason Dixon shows U.S. Sen. Marco Rubio, R-Fla., ahead of U.S. Rep. Val Demings, D-Fla. Rubio takes 47 percent, with Demings behind at 41 percent, while 2 percent back other candidates and 10 percent are undecided. That shows little change from a February Mason Dixon poll which had Rubio ahead 49 percent to 42 percent.
FLORIDA STATE・3 DAYS AGO

On Thursday, U.S. Rep. Gus Bilirakis, R-Fla., said President Joe Biden should have covered the entire state of Florida in his disaster declaration instead of just nine counties. “Despite the entire Florida federal delegation asking President Biden to declare all 67 counties a designated disaster area, the president only included...
FLORIDA STATE・6 DAYS AGO
FloridaDaily

Insisting that Zhou Deyong, a Falun Gong practitioner, was detained by the Chinese Communist Party (CCP) and imprisoned under bogus charges last year, members of the Florida delegation are going to bat for him. This week U.S. Sens. Marco Rubio, R-Fla., and Rick Scott and U.S. Reps. Gus Bilirakis, R-Fla.,...
FLORIDA STATE・7 DAYS AGO
FloridaDaily

U.S. Sen. Marco Rubio, R-Fla., who sits on the U.S. Senate Foreign Relations Committee, is backing the efforts of U.S. Sen. Bob Menendez, D-NJ, the chairman of the committee, to cut off security assistance to Azerbaijan. On Tuesday, Menendez introduced a resolution “condemning Azerbaijani forces’ illegal and unprovoked assault on...
FOREIGN POLICY・8 DAYS AGO
FloridaDaily

Last week, U.S. Sen. Marco Rubio, R-Fla., called on the Biden administration to support renewing the United Nations Human Rights Council’s Independent International Fact-Finding Mission in Venezuela (FFM) and to take steps to elevate the FFM to a Commission of Inquiry (COI). Rubio, who sits on the U.S. Senate...
CONGRESS & COURTS・8 DAYS AGO

FEMA Administrator Deanne Criswell announced on Wednesday that President Joe Biden made additional disaster assistance available to the state of Florida by authorizing an increase in the level of federal funding for debris removal and emergency protective measures undertaken in the state of Florida as a result of Hurricane Ian beginning Sept. 23, 2022 and continuing.
FLORIDA STATE・13 HOURS AGO
FloridaDaily

Florida Gov. Ron DeSantis’s decision to send a plane of immigrants to Martha’s Vineyard sparked debate on a range of issues, including how the move would play out politically. Politico published a piece last week that claimed DeSantis’s relocation of immigrants would cost him in South Florida, where many Hispanics live. The piece quoted liberal sources who said DeSantis would come off looking like the tyrants many Hispanic voters fled. But a look at political developments over the last decade show Politico is misreading Hispanic voters.
FLORIDA STATE・4 DAYS AGO