The Detroit Lions hit it big in the "eighth round" of the NFL draft last year, signing two cornerbacks among their undrafted free agent class who played significant roles as rookies.

AJ Parker won the starting slot cornerback in Week 1, and Jerry Jacobs emerged as starting outside corner before tearing his ACL late in the season.

"If you step in this building, you’ve got an opportunity to compete ... That’s kind of how we approach it because of undrafted free agents."

The Lions entered Saturday with 83 players on their 90-man roster and are expected to sign a handful of undrafted free agents in the coming days.

Here is a running list of players who have agreed to UDFA contracts:

Shuffled selflessly from position to position along MSU's offensive line throughout his five seasons. The 6-foot-5, 317-pound native of Chicago started 39 of his 44 appearances, including 12 starts last season in earning All-Big Ten honorable mention by both the league’s coaches and media. Started 25 times in his career at right guard, 11 times at right tackle and three times at left tackle.

As a key blocker helping Kenneth Walker III win the Doak Walker Award and Big Ten running back of the year, Jarvis played 739 of 828 offensive snaps before sitting out the Peach Bowl, starting the first eight games at right guard and his final four at right tackle. 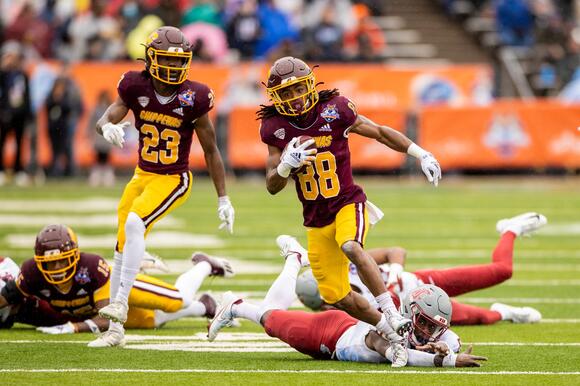 Pimpleton is staying home. The Muskegon native and Chippewa standout  was a two-time first-team All-Mid-American Conference selection (2019, 2021) and was MAC Special Teams Player of the Year last season.

He finished his career in Mount Pleasant with 166 catches for 2,100 yards and 12 scores, while rushing 38 times for 293 yards and another five touchdowns.

The Nigerian-born offensive tackle spent three years at Memphis before transferring to TCU. He was an honorable-mention Big 12 Offensive Newcomer of the Year after starting 12 games at left tackle for the Horned Frogs and the final 37 games of his career. Eze, a 6-foot-6, 321-pounder was the team captain for the week in a 52-31 win at Texas Tech. Deal includes a $20,000 signing bonus and $150,000 base salary guarantee, according to Pro Football Focus.

Bell was one of the best running backs in the Mountain West last season, rushing for 1,091 yards and nine touchdowns, averaging 4.5 yards per carry. His journey to the league was circuitous —  starting at JUCO Arizona Western Community College, where he ran for 2,404 yards with 18 touchdowns while going 20-2 in two years. He transferred to Nebraska where he played in four games, rushing 35 times for 173 yards before going to SDSU. Deal includes a $15,000 signing bonus and $85,000 base salary guarantee, according to NFLPA records.

Sutton made a triumphant return to the field in 2021 after tearing his ACL in 2019 and sitting out the 2020 season because of COVID. He had 61 catches for 904 yards and finished third on the Appalachian State career list with 24 touchdowns. A big receiver and vertical threat, Sutton played one season at Kansas State in 2016. Appalachian State announced his signing.

A Birmingham Groves alumnus, Boswell started two seasons at cornerback for the Redhawks. He had eight passes defensed and his first career interception in 2021. Miami (Ohio) announced his signing .

Obeid played two seasons at tackle for the Bulldogs but projects as a guard in the NFL. He was a key cog in a Ferris State offense that finished fifth in the country in rushing (280.1 ypg) and won the Division II national championship.

More: Shaped by the war he witnessed as a kid, Ferris State OL Zein Obeid awaits call in NFL draft

Deese is a blocking tight end in the mold of his father, former San Francisco 49ers offensive tackle Derrick Deese Sr. He caught 47 passes for 730 yards last season. Deal includes a $5,000 signing bonus and $95,000 base salary guarantee, according to NFLPA records.

A Berkley native, Givan played three seasons at Ball State and one at San Diego_ State before finishing at Southeastern Louisiana. He caught 40 passes for 378 yards and three touchdowns last season. Deal includes a $10,000 signing bonus, per NFLPA records.

Myles Garrett is concrete evidence as to why players should never compete in the NFL Pro Bowl.  The Cleveland Browns star suffered a brutal injury during Sunday's Pro Bowl events.  Garrett has been diagnosed with a dislocated toe, per NFL insider Tom Pelissero.  "#Browns star DE ...
CLEVELAND, OH・21 HOURS AGO
Sports Illustrated

The Hall of Fame quarterback was not happy with the officials during the last of Sunday’s three flag football games.
19 HOURS AGO
The Detroit Free Press

Troy Weaver has earned the nickname, "Trader Troy," since his Detroit Pistons general manager tenure began in June 2020. Weaver is a man who moves quietly — he signed a secret contract extension last summer that only became public a few days before Christmas — and has quickly earned a reputation for his...
DETROIT, MI・8 HOURS AGO
The Detroit Free Press

It was only one sequence. But it seemed to capture the resurgence of a Michigan basketball team that had flatlined one week ago. Kobe Bufkin raced toward the goal, releasing the ball high off the backboard just as he collided with multiple Ohio State defenders. As he crashed to the...
COLUMBUS, OH・23 HOURS AGO
The Detroit Free Press

Detroit Pistons (14-40) vs. Boston Celtics (37-16) Where: Little Caesars Arena in Detroit. TV: Bally Sports Detroit. Radio: WXYT-FM (97.1; Pistons radio affiliates). Game notes: The Celtics and the Pistons have one thing in common ahead of their meeting at LCA tonight — both are coming off a loss to the Phoenix Suns. The C’s were scorched by the Suns’ 32-point fourth quarter on Friday in which Phoenix hit five of nine 3-points to turn a one-point lead through three into a 12-point victory. The P’s, however, never even got that close on Saturday night, as Deandre Ayton took full advantage of Detroit’s inability to stop the pick-and-roll.
DETROIT, MI・9 HOURS AGO
The Detroit Free Press

NEW YORK – Tom Izzo on Thursday said Michigan State basketball spent much its extra time off working on improving its offense. Back to the drawing board. In a game...
EAST LANSING, MI・2 DAYS AGO