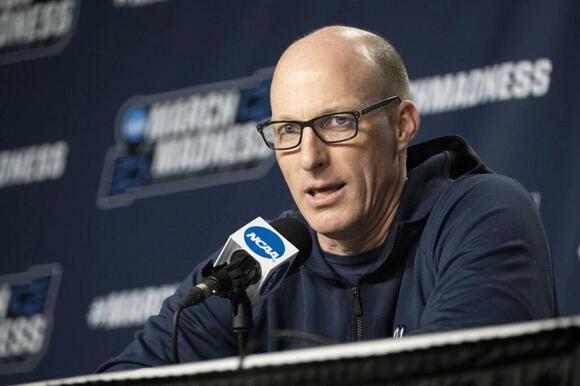 Akron is extending the contract of men’s basketball coach John Groce through the 2029-30 season, ESPN reported on Wednesday.

He guided the Zips (24-10) to a Mid-American Conference tournament championship and a berth in the 2022 NCAA Tournament, where they lost to UCLA in the first round.

Per the report, Groce opted to retain his same $650,000 salary in order to invest more in the program, including a dedicated strength coach and a higher salary pool for his assistants. He is eligible for $75,000 retention bonuses on July 31, 2025 and July 31, 2028.

Southern California puts its four-game winning streak on the line Thursday in a pivotal Pac-12 matchup with host Oregon in
EUGENE, OR・3 HOURS AGO
Sportsnaut

No. 7 UCLA aims to protect Pac-12 lead at Oregon State

Jaime Jaquez Jr. is doing yeoman work on the boards for No. 7 UCLA. The senior forward strives to record
LOS ANGELES, CA・13 HOURS AGO
Sportsnaut

Trade reports: D’Angelo Russell could be headed to Lakers

With LeBron James’ pursuit of the NBA’s all-time scoring record now complete, the Los Angeles Lakers can work on getting
LOS ANGELES, CA・3 HOURS AGO
Sportsnaut

Despite Tuesday night being an evening of historic celebration for the Los Angles Lakers franchise, it seems the team’s poor
LOS ANGELES, CA・7 HOURS AGO
Sportsnaut

The Los Angeles Lakers have done it. With less than 24 hours to go ahead of the NBA trade deadline,
LOS ANGELES, CA・48 MINUTES AGO
Sportsnaut

It's time to check out the five biggest storylines entering the 2023 NASCAR season with the Daytona 500 under two weeks away.
LOS ANGELES, CA・7 HOURS AGO
Sportsnaut

Joey Logano responds to Kyle Busch after he called him out for dumping him during the 2023 Busch Light Clash at The Coliseum.
LOS ANGELES, CA・11 HOURS AGO