The urban menu explores everything you want to know see and read about because you are passionate about making a difference in your community; it is about finding your connection and it is about what culture influences our everyday life. A publication of culture, art, food, and conversation. YOUR CITY, YOUR PASSION, YOUR LIFE

Effects of cold exposure on muscle soreness and physical performance 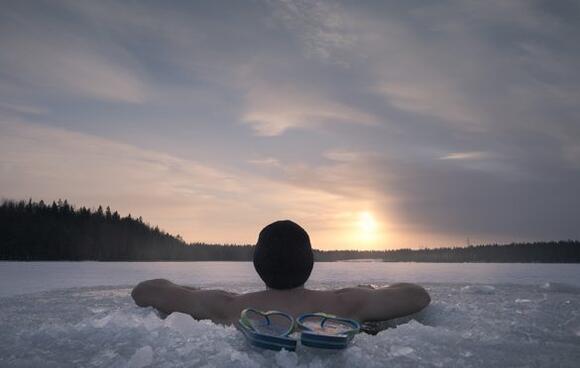 You often see athletes taking ice baths after practice or competition, or ice packs put on fighters in between rounds during combat sports. There are a lot of suggestions in the fitness community that long swims in cold water are going to help you boost your metabolism. The relationship between exercise and cold exposure has been increasingly explored in recent times. I just found out that there have been some new discoveries on the topic that seem quite baffling.

The temperature-regulation research of Stanford biologists H. Craig Heller and Dennis Grahn has led to the discovery of a device that rapidly cools body temperature, greatly improves exercise recovery and substantially enhances performance in athletes. The rapid thermal exchange device, nicknamed ‘The Glove,’ creates a vacuum to draw blood to the surface of the palms. Cold circulating water cools the blood, which then returns to the heart and rapidly lowers the body’s core temperature. For Heller and Grahn, the story started with bear research done in collaboration with the University of Alaska. Black bears are extremely well-insulated animals, equipped with a heavy coat of fur and a thick layer of hypodermic fat that helps them maintain their body temperature as they hibernate through winter. But once spring arrives and temperatures rise, these same bears face a greater risk of overheating, rather than of hypothermia. Heller and Grahn discovered that bears - and, in fact, nearly all mammals - have built-in radiators: hairless areas of the body that feature extensive networks of veins that are very close to the surface of the skin. In humans, these special blood vessels are located on the forehead and around the eyes, on the bottom of our feet, and on the palms of our hands. The researchers’ glove targets our   But the glove’s effects on athletic performance didn’t become evident until the researchers began using the glove to cool one member of the lab that loves to exercise, between sets of pull-ups. The glove seemed to nearly erase his muscle fatigue: after multiple rounds, cooling allowed him to do just as many pull-ups as he did the first time around. So the researchers started cooling him after every other set of pull-ups. The researchers also applied the cooling method to other types of exercise – bench press, running, cycling. In every case, rates of gain in recovery were dramatic, without any evidence of the body being damaged by overwork. Versions of the glove have since been adopted by the Stanford football and track and field teams, as well as other college athletics programs - the San Francisco 49ers, the Oakland Raiders and Manchester United soccer club. This is exciting and we may be on the brink of a revolution in exercise and sports performance, but it is probably going to take some time for this device to become, available to the general public. So is there any way in which this could be applicable for us civilians that like to exercise? Professor Heller states that cooling your palms, feet and forehead could be beneficial even if it is done while using available tools like cold water, frozen peas or berries, or just anything that you have around. The catch is not to put on things that are too cold. Cooling them too much is going to contract your blood vessels and stop the emission of heat. The solution to this would be moving the pack from one hand to the other in between sets, or stepping in and out from cold water. Sometimes simple methods solve complicated problems. I know I am going to experiment, are you? If you would like to hear more about the effects of cold exposure on physical performance and recovery, check this out: https://www.youtube.com/watch?v=77CdVSpnUX4

The post Effects of cold exposure on muscle soreness and physical performance appeared first on The Urban Menu .

The urban menu explores everything you want to know see and read about because you are passionate about making a difference in your community; it is about finding your connection and it is about what culture influences our everyday life. A publication of culture, art, food, and conversation. YOUR CITY, YOUR PASSION, YOUR LIFE