Susan Lucci thanks fans for support after husband's death 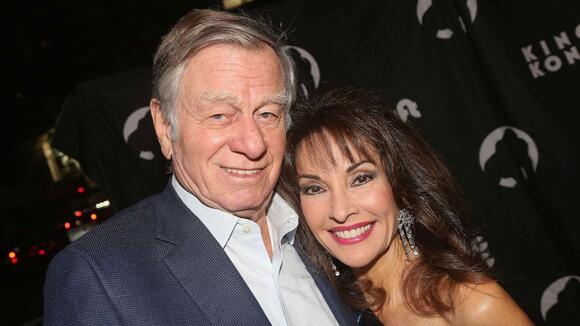 Susan Lucci is thanking fans for their support after the recent death of her longtime husband, Helmut Huber.

The soap opera legend took to Instagram on Sunday to share a heartfelt message alongside a photo of a stunning flower arrangement.

"You have deeply touched my heart -- I thank each and every one of you for your outpouring of condolences for me -- and beautiful, loving comments for Helmut," Lucci, 75, wrote.

Huber died in March at the age of 84. The couple, who had been married for more than 52 years, shared two children together, daughter Liza and son Andreas.

Lucci has largely remained silent on social media since Huber's passing, but she broke that silence on Easter to share a post in his memory.

Alongside a photo of the two of them dancing, Lucci called her late partner "the love of my life."

Reese Witherspoon is in celebration mode: Her youngest child, son Tennessee Toth, just turned 10. The "Legally Blonde" actress, 46, took to Instagram on Monday to mark her little one's special day. "Happy 10th Birthday to my wonderful boy, Tennessee!!" she wrote in the caption of her post. "Your brilliant...
CELEBRITIES・5 DAYS AGO
GMA

In a story from A to Z, Melanie Chisholm goes back to the days before Spice Girls.
MENTAL HEALTH・4 DAYS AGO
GMA

"Jeopardy!" champion Amy Schneider announced that she and her partner Genevieve Davis got married back in May.
RELATIONSHIPS・3 DAYS AGO

‘Relationship Man’ Kid Cudi Wants to Settle Down ASAP: ‘My Goal Is to Find Someone … Get Married, and Have More Kids’

Here's a look at Kid Cudi's current and past relationships and why the rapper wants to quickly settle down to get married and have kids.
RELATIONSHIPS・22 MINUTES AGO
GMA

'The Bachelor' season 27 to star Zach Shallcross: 'I am ready to find my person'

Anne Heche died as a result of a fiery car crash in early August.
CELEBRITIES・10 DAYS AGO
GMA

Adam Perry's Twitter post of his son's first day of school photos has gone viral for the best reason.
FAMILY RELATIONSHIPS・10 DAYS AGO

"I am the luckiest Mama in all the land," she wrote on Instagram.
CELEBRITIES・8 DAYS AGO
GMA

Since its 1993 release, “Hocus Pocus” has put a spell on audiences around the globe. Now, 29 years later, the Sanderson sisters are back for the sequel, “Hocus Pocus 2" on Disney+. In the new film, out Friday on Disney+, Winifred, Sarah and Mary Sanderson, played by...
MOVIES・2 DAYS AGO
GMA

Teresa Giudice reflected on her "Dancing with the Stars" journey with "GMA" after being eliminated on Sept. 26.
THEATER & DANCE・4 DAYS AGO

John Stamos opened up about losing Bob Saget and what he learned from his friend's sudden death.
CELEBRITIES・1 DAY AGO
GMA

"Full House" alum Lori Loughlin booked a role in the TV movie "Fall Into Winter," her first film role since her prison stint for the college admissions scandal.
MOVIES・8 DAYS AGO
GMA

Elton John has released the hotly anticipated music video for his and Britney Spears' "Hold Me Closer."
THEATER & DANCE・3 DAYS AGO
GMA

Actress Chloe Grace Moretz recently opened up on how a viral meme about her body impacted her mental health.
CELEBRITIES・1 DAY AGO
GMA