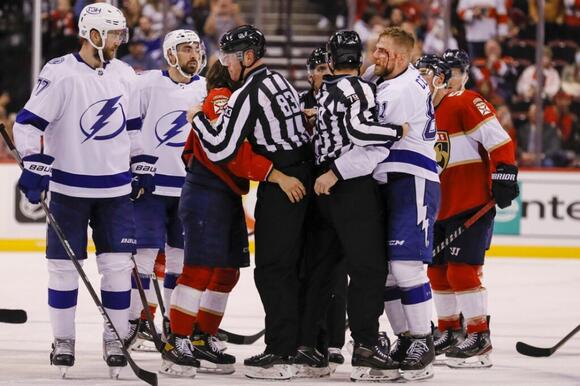 Florida Panthers forward Ryan Lomberg was automatically suspended for one game Monday under the NHL’s rule of instigating in the final five minutes of a game.

The incident occurred Sunday in the Panthers’ 8-4 win over Tampa Bay.

Lomberg initiated a fight with Lightning defenseman Erik Cernak with 3:36 remaining in the third period. Lomberg was sent off with a 10-minute misconduct and Brunette was ejected.

Guardians set to complete playoff tuneup in game vs. Royals

Heading into a three-game series in Kansas City on Sept. 5, the Cleveland Guardians had lost five straight games and
KANSAS CITY, MO・25 MINUTES AGO
Sportsnaut

The first shoe has dropped in the NFL quarterback carousel, with the Pittsburgh Steelers turning the reins of their offense
NFL・15 HOURS AGO
Sportsnaut

Carolina Panthers head coach Matt Rhule is squarely on the NFL hot seat, a favorite to be one of the
CHARLOTTE, NC・19 HOURS AGO
Sportsnaut

The Washington Commanders struck one of the most surprising trades of the 2022 NFL offseason, acquiring Carson Wentz as part
WASHINGTON, DC・17 HOURS AGO
Sportsnaut

We’re getting to the point in the season where what we see on the field is who the team is.
INDIANAPOLIS, IN・1 DAY AGO
Sportsnaut

Not only did the Denver Broncos lose the game yesterday, but they also lost their starting running back, Javonte Williams,
DENVER, CO・1 DAY AGO
Sportsnaut

Minnesota Timberwolves center Karl-Anthony Towns was so ill last week with a throat infection that he was hospitalized on bed
MINNEAPOLIS, MN・1 DAY AGO
Sportsnaut

The Atlanta Braves, who clinched their fifth straight National League East title by winning the penultimate game of the season,
MLB・4 HOURS AGO
Sportsnaut

Indianapolis Colts All-Pro linebacker Shaquille Leonard missed the first three games of the 2022 campaign after undergoing off-season back surgery.
INDIANAPOLIS, IN・2 DAYS AGO

The quarterback matchup will be Drake Maye versus Tyler Van Dyke, and maybe Jake Garcia. Maye, who leads the ACC
CHAPEL HILL, NC・9 HOURS AGO
Sportsnaut

The Denver Broncos added veteran running back Latavius Murray to their 53-man roster on Tuesday to fill the void left
DENVER, CO・18 HOURS AGO
Sportsnaut

With history made, the New York Yankees now have a decision to make regarding Aaron Judge on Wednesday in the
ARLINGTON, TX・45 MINUTES AGO