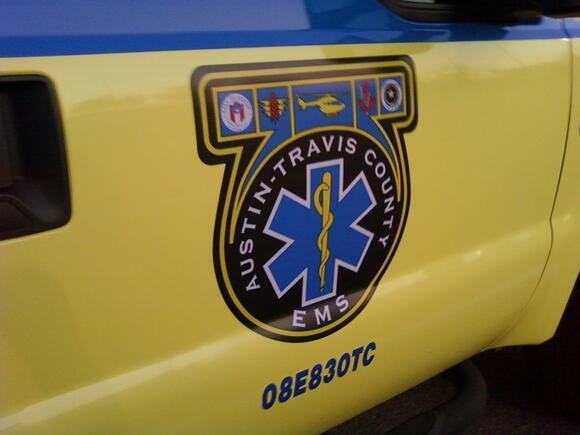 An adult was taken to Dell Seton Medical Center by STAR Flight with critical, life-threatening injuries after a motorcycle and vehicle crashed at Bradshaw Road and River Plantation Drive in southeastern Travis County, ATCEMS said.

Medics responded to the crash around 4:54 p.m. Tuesday, ATCEMS said.

ATCEMS said medics responded to that crash around 5:05 p.m. to the 2800 block of East 7th Street and Allen Street.

Austin police arrested a driver on suspicion of driving while intoxicated early Friday morning after it said she hit and killed a man in the middle of North Lamar Boulevard in north Austin.
AUSTIN, TX・1 DAY AGO
KXAN

Man arrested in 7th Street shooting that killed one, injured another

Nathan Ramirez, 18, was charged with first-degree murder. Detectives said Ramirez was arrested one hour after the murder with a firearm from a separate incident. He had been charged in that case with second-degree felony possession of a controlled substance and with Class A unlawful carrying of a weapon.
AUSTIN, TX・16 HOURS AGO
KXAN

Person in hospital after reported semi-truck crash near Manor

Austin-Travis County EMS said paramedics took an adult to the hospital after a Wednesday morning crash between a vehicle and a semi-truck.
MANOR, TX・3 DAYS AGO
KXAN

Police searching for suspect of Footlocker robbery in east Austin

Police said the suspect pulled a handgun out in the store and showed it to employees. He left with an undisclosed amount of cash and athletic shoes.
AUSTIN, TX・17 HOURS AGO

The Austin Police Department on Thursday identified the motorcyclist who was shot and injured by law enforcement while reportedly trying to steal another vehicle earlier this week.
AUSTIN, TX・1 DAY AGO
KXAN

The Leander Police Department said it was investigating a homicide Saturday morning in the 1100 block of Snow Goose.
LEANDER, TX・45 MINUTES AGO
KXAN

The Austin Police Department is searching for an SUV that took off after hitting and severely injuring a bicyclist in north Austin last month.
AUSTIN, TX・2 DAYS AGO
KXAN

Austin Police said a person died at the hospital Wednesday night after a shooting in the East Riverside-Oltorf neighborhood.
AUSTIN, TX・2 DAYS AGO

The Austin Police Department is investigating three separate shootings that occurred within three hours on Thursday morning.
2 DAYS AGO
KXAN

One dead in crash on US 281 in Burnet County

Police said the crash occurred at the intersection of the northbound Interstate 35 service road and West Parmer Lane around midnight.
AUSTIN, TX・3 DAYS AGO
KXAN

A medical emergency alarm was called for Kyle George Wagner at approximately 10:30 a.m. after a corrections officer observed he was unresponsive in his cell.
TRAVIS COUNTY, TX・2 DAYS AGO

Five people were indicted in the death of their friend who was killed after falling off a boat in Lake Travis in October 2019, according to court documents obtained by KXAN.
TRAVIS COUNTY, TX・21 HOURS AGO
KXAN

Congress Avenue to close this weekend over possible filming

Drivers heading through downtown Austin this weekend will need to find alternate detours as possible film production crews will be shooting along Congress Avenue.
AUSTIN, TX・1 DAY AGO
KXAN

Police said they're investigating a homicide after they found a man dead Wednesday from "blunt force trauma to the head" outside of a store in north Austin.
AUSTIN, TX・2 DAYS AGO
KXAN

Man receives 30-year sentence for 2020 crash that killed 1, injured another

A man was sentenced to 30 years in a Texas prison after he pleaded guilty to intoxication manslaughter and intoxication assault connected to a 2020 incident that caused a death in Manor, Texas.
MANOR, TX・2 DAYS AGO
KXAN

The family of a woman who was killed outside of Florence last week will share details in a press conference Thursday morning.
WILLIAMSON COUNTY, TX・2 DAYS AGO
KXAN

Police arrested a woman earlier this month after she was accused of threatening a daycare and claiming that the staff was molesting children, and that "God was going to kill them."
CEDAR PARK, TX・1 DAY AGO