Jordan Klepper Details His Most 'Revealing' Exchange With A Trump Fanatic 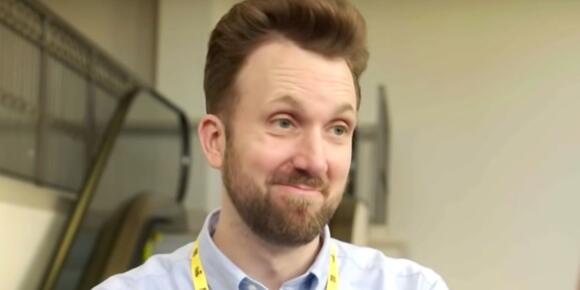 Sometimes Donald Trump ’s supporters just make it too easy for Jordan Klepper to do his job.

The comedian has interviewed countless fans of the former president in his popular field pieces for “ The Daily Show ,” but one rallygoer jumped to mind when Klepper looked back on the wildest moments of his expeditions into Trump-world.

“There is a person that I found very revealing,” Klepper told HuffPost in an interview Wednesday.

The exchange took place at a rally during Trump’s reelection campaign, where Klepper asked an attendee what he liked about the then-president.

“I asked him what he did to be so successful during the Trump administration and he quite honestly answered: He was a debt collector.”

“And it was at that moment that I kind of lost it,” he continued. “Because, I mean, I don’t have to come armed with any comedy when the comedy like that writes itself.”

That moment appeared in Klepper’s 2021 special, “Jordan Klepper Fingers the Pulse: Into the MAGAverse.” The man, a Trump rally enthusiast named Edward X. Young, told Klepper, “I’m literally making four times as much as I was making when Obama was president.”

“The Daily Show” correspondent traveled to Budapest for his latest special , “Jordan Klepper Fingers the Globe: Hungary for Democracy,” which examines American conservatives’ obsession with the country and its Trump-esque, far-right leader, Prime Minister Viktor Orbán . It airs on Thursday.

Roger Stone, a longtime ally of Donald Trump, told a documentary crew a day before the 2020 election that he was ready for violence. “Fuck the voting, let’s get right to the violence,” he’s heard saying in footage obtained by CNN from filmmakers Christoffer Guldbrandsen and Frederik Marbell. “Shoot to kill. See an antifa? Shoot to kill. Fuck ’em. Done with this bullshit.”
POTUS・18 HOURS AGO
HuffPost

Former New Jersey Gov. Chris Christie (R) said if Donald Trump keeps making “nonsense arguments” on TV about the Justice Department investigation into his handling of classified documents, he might just find himself facing a “self-inflicted indictment.”. “I think these are all self-inflicted wounds by Donald Trump,”...
POTUS・2 DAYS AGO

Ted Cruz Refuses To Endorse Donald Trump At The RNC

Fetterman's tattoos commemorate those who died violently when he was mayor of Braddock, Pennsylvania.
PENNSYLVANIA STATE・1 DAY AGO
HuffPost

Hundreds of newly revealed text messages proposing strategies to overturn the 2020 presidential election that were turned over to the House Jan. 6 committee by Donald Trump’s former White House chief of staff Mark Meadows are now clarifying his alleged role in the effort, according to The Guardian. Many...
PRESIDENTIAL ELECTION・13 HOURS AGO
Daily Mail

Former liberal MSNBC host and sportscaster Keith Olbermann revealed on Monday that he'd dated Democratic Arizona Senator Kyrsten Sinema over a decade ago. Olbermann, who currently hosts a podcast, didn't spare his disappointment with the moderate senator, claiming that she previously was even more liberal than him. The ex-SportsCenter and...
ARIZONA STATE・21 HOURS AGO

Former President Donald Trump said the “rich friends” he acquired from his presidency made it all worth it to him, according to an excerpt from reporter Maggie Haberman’s upcoming book published in The Atlantic on Sunday. “The question I get asked more than any other question: ‘If...
POTUS・2 DAYS AGO
HuffPost

The Florida Republican pretty much summed up what the GOP has become, said critics.
FLORIDA STATE・15 HOURS AGO
HuffPost

Russia's call-up of troops, sham referendums and nuclear threats are "not signs of strength or confidence," the White House's national security adviser said.
POLITICS・1 DAY AGO

In an interview with Axios, Sen. Lindsey Graham claims former President Donald Trump has the ability to destroy the Republican party.
POTUS・1 DAY AGO
HuffPost

The "Countdown" host said he went out with the Arizona lawmaker in 2010 and 2011, and had some thoughts about her alliance with Mitch McConnell.
ARIZONA STATE・14 HOURS AGO
HuffPost

“We celebrate the rich heritage of the American story,” a narrator says, over footage of a drilling rig in Russia's Volgograd region.
FOREIGN POLICY・1 DAY AGO
HuffPost

Climate Expert Says Attack By GOP Lawmaker Is Nothing New: ‘This Is The Playbook’

The conspiracy theory-spewing Fox News personality urged the GOP to copy one tactic of Giorgia Meloni in particular.
CELEBRITIES・15 HOURS AGO
HuffPost

One MSNBC host issued a warning about the 2024 election if Republicans gain control of the House of Representatives and Donald Trump runs for office again.
ELECTIONS・4 HOURS AGO
HuffPost

“Pitch Perfect” star Adam Devine has a PSA — he is not Adam Levine, and those cheating allegations are not about him.
1 DAY AGO
HuffPost

His statement came less than an hour after the YouTube troupe said it had severed ties with Fulmer.
ENTERTAINMENT・4 HOURS AGO